Richard was a member of the 30th Company when he was a plebe. 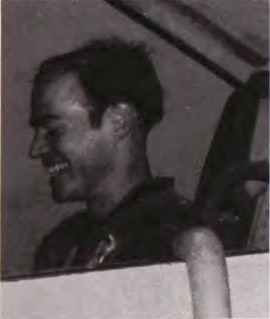 From the June 1972 issue of Shipmate.

Lt. Richard Lee Thomas, USAFR, was killed 24 February when his jet trainer crashed near Reese AFB in Texas. He was buried in Arlington National Cemetery on 29 February.

Born in San Diego, Ca., he entered the Naval Academy with the class of 1970. He left the Academy in 1968 and entered the Air Force’s Officer Training School. He graduated 15 March 1971 and was assigned to Reese AFB for flight training. He was scheduled to graduate 16 March 1972. At the time of his death Lt. Thomas was on a routine solo flight.

Surviving are his widow, Carol; a daughter, Deena; a son, Richard Lee Jr., who was born six days after his father’s death; and his parents, Cdr. And Mrs. Charles S. Thomas, Jr., USN (Ret.) '39.

… on 24 Feb '72, a solo "senior class" student pilot augered in (literally) in the final turn to the same runway, 35L. His name was Thomas. A buddy and I were driving to base for the "late shift" and saw the smoke, replying to each other - "that's on the wrong side of the road for the firefighters to be practicing." Sure enough it was Thomas' crash smoke.

One needs to understand how formation, overhead traffic patterns work to understand the following explanation. Thomas was solo, number four in a four ship formation flight (near the end of his UPT training - about to get his wings) - but got too close to number three after pitching out in the overhead pattern, apparently tried to get spacing while on inside downwind, got too slow, so when he started his final turn - left wings level flight, he immediately entered a stall. The only way he could possibly have recovered was to roll wings level while going to full afterburner, releasing back pressure, trading altitude for airspeed. Instead, he went to afterburners and kept pulling back pressure, ensuring his doom.

He was piloting a T-38 at Reese AFB in Texas and is buried in Arlington National Cemetery.

Richard is one of 20 members of the Class of 1970 on Virtual Memorial Hall.

The "category" links below lead to lists of related Honorees; use them to explore further the service and sacrifice of the alumni in Memorial Hall.
Retrieved from "http://usnamemorialhall.org/index.php?title=RICHARD_L._THOMAS,_2LT,_USAFR&oldid=135212"
Categories: