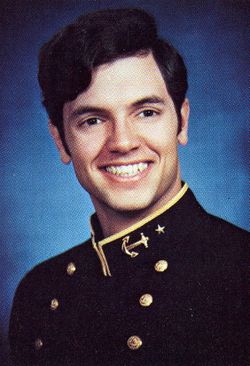 Robert is listed as 33 years of age and from Westmoreland, N.Y.

From the June 1991 issue of Shipmate:

LCdr Robert (Tony) Nemecek USN was killed in an aircraft accident involving two P-3 aircraft on an anti-submarine exercise southwest of San Diego on 21 March 1991. He was born on 21 December 1957 in Ithaca, New York. He was graduated from Notre Dame High School in Utica, New York, and was appointed to the Naval Academy from that state.

While at the Academy he qualified as a small craft commander; played varsity football; sang in the Glee Club; and was Class President his Fist Class Year.

After earaing his Naval Hight Officer's Wings he served with PatRon17 in Barbers Point; Military Personnel Command in Washington, D.C; was assistant navigator of USS AMERICA (CV-66); and attended the Armed Forces Staff College in Norfolk. While in Washington, he was assigned as a military aide at the Reagan White House. He subsequently served with PatRon 50 at Moffett Field.

He was selected for early promotion to lieutenant commander and received numerous letters of commendation throughout his career. His awards included a Navy Commendation Medal and the Navy Achievement Medal in addition to the Armed Forces Expeditionary Medal.

Two memorial services were held at NAS Moffett Field. The first on 27 March was a private service for family and friends at the Station Chapel. The second on 28 March was a memorial service for all 27 who were killed in the accident. CNO attended the latter. A Memorial Mass was celebrated on 6 April at 1100 in St. Anthony Of Padua Church, Utica, New York.

Survivors include his widow, Lorrie, of Mountain View, California, his mother and father, a brother, Martin, a sister, Mari Jo Stallings and his grandmother Mrs. Ethel Jefferson.

Robert is one of 11 members of the Class of 1980 on Virtual Memorial Hall.

The "category" links below lead to lists of related Honorees; use them to explore further the service and sacrifice of the alumni in Memorial Hall.
Retrieved from "http://usnamemorialhall.org/index.php?title=ROBERT_A._NEMECEK,_LCDR,_USN&oldid=79047"
Categories: