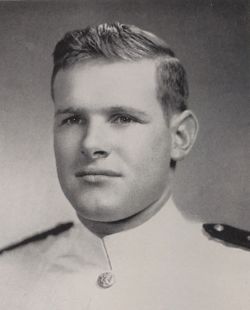 A word of warning—speak no good of the western land of liquid sunshine to this robust Pensacolan—Florida, where sunshine isn't merely false propaganda, has done herself proud in developing this six-foot Adonis—a little Valentino—who passed up a basketball and football scholarship to Vanderbilt that's only the beginning. He constitutes a threat in any sport —among others, baseball, swimming, and golf—was unanimously elected class treasurer—declared a profit, says he, but fails to say for whom—definitely the kind of guy people search for but rarely find—we'll be looking for Bob again soon. 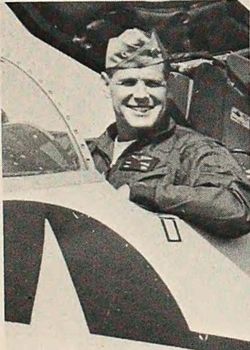 Bob was serving as commanding officer of Attack Squadron Twelve when killed flying an A4E Skyhawk returning to his ship from a night combat mission over North Viet Nam.

The crash was on November 12, 1966; he collided with another aircraft from his squadron while returning to USS Franklin D. Roosevelt (CVA 42). The other pilot was also lost. Bob has a memory marker in California.

Bob Frosio was my Godfather. I don't know too many details about him but I shall relate what I know. Bob's father had been one of the early Naval Aviators. Bob and my father were also Naval aviators during WW2 and probably met each other at Pensacola, Florida at least by 1944 when I was born and Baptised.

Because of the periodic change in duty stations in Naval careers, we moved on and I did not meet Bob again until about 1956 when he visited our home in Norfolk, Virginia. He impressed me as being an energetic, friendly person and he gave me a set of prints of navy airplanes. After that I never saw him again.

I learned about his death probably from my father. He said that Bob was the Commanding Officer of an A-4 squadron and that after a strike on Hanoi one of his pilots was returning to the carrier with an aircraft that had been damaged in the attack. The damage had disabled the aircraft's electrical system and the plane had no lights - and probably no radio etc. Bob turned back to help the pilot return to the ship but they somehow collided and crashed into the sea.

In the 90's I met a niece of his near San Diego where his parents had retired. CARL ROSENGRANT, ROSENG@SPAWAR.NAVY.MIL, 1/29/00