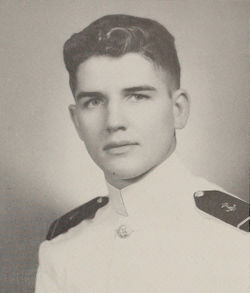 Bob came north after a year of civil engineering at the University of Alabama, ready to set all the Yankees straight on who really won the Civil War. His pre- Academy "book-larnin" helped him breeze through the academics and enabled Bob to spend a lot of his time in which to elaborate on the glories of his beloved Dixie and to help the lightweight football team win a couple of championships. His slow drawl and cheerful smile will long be remembered by his classmates; we wish him the very best of everything in his quest for Navy wings.

He was also a member of the 4th Battalion staff (winter).

U.S. Navy Commander William L. "Mike" Reardon, U.S. Navy Lieutenant Commander Robert R. Kornegay and USN Aviation Machinist Mate 1st Class (ADJ-1) Vernon K. Whipkey lost their lives when their A-3B Skywarrior (BuNo 138952) came to earth eight miles short of the runway during a GCA approach to Lockbourne AFB, Columbus, OH. They were on their way to Quonset Point, RI to pick up a weapon that had been brought there a month earlier.

He is buried in Alabama.

Retrieved from "http://usnamemorialhall.org/index.php?title=ROBERT_R._KORNEGAY,_LCDR,_USN&oldid=15519"
Categories:
This page was last modified at 16:28 on 5 October 2020.
About USNA Virtual Memorial Hall