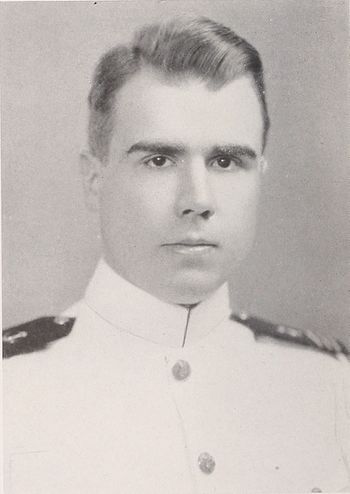 Robert Scott Whitman and Margaret Stockbridge were married on 22 Aug 1913 in Emmett, MI. They were the parents of two children: Robert Scott Jr and George Stockbridge Whitman.

Robert Jr graduated from Binghamton Central High School in June 1933, after playing tackle on the varsity football team for two years, ranking 29th in the large graduating class, serving as business manager of the school paper and writing for the Panorama. He also managed the baseball team and was a delegate to the Red Cross convention at Washington in his sophomore year. In early January 1934, Scott and 27 other candidates sat for the entrance exam to the Naval Academy. Based upon the test results Whitman was proposed as a second alternate to one of the two finalists recommended by Representative Marian W. Clarke to the Navy Department for appointment to Annapolis. He wasn't appointed to Annapolis that year so he entered Dickinson College, Carlisle, PA in the fall of 1934. He completed a year at Dickinson in which he played football. He took the entrance exam again and this time he was successful.

Robert Scott Whitman, Jr. was appointed a midshipman at the US Naval Academy from New York on 24 August 1935. On 20 Jan 1937, the entire 2400 member regiment of midshipmen, including Robert S. Whitman Jr., marched in President Roosevelt's inaugural day parade in Washington, DC. According to the Lucky Bag yearbook of the US Naval Academy of 1939, Robert Scott Whitman, "Whit" or "Scottie" as he was known was very active in extracurricular activities at the Academy. He played football for several years, and was active in Glee Club, Musical Club Show, Assistant Director, Stunt Committee, Chairman, Chairman Activities, Committee, Log Staff, Feature editor, Trident and Stripe. His classmates wrote this about him, "Hailing from the apparently thriving climate of Binghamton, where men achieve bulk and vigor (and his drags are proud of it) he found the mechanical arts here less palatable than the liberal arts at college. By 'jumping numbers' continuously since plebe year, he proved, however, that his mind was readily acclimated to the new curriculum. Either his impatience to put to sea or his early civilian independence netted him a month cruise not included in plebe training. Fortunately in later years he has been more judicious with nocturnal exploits over the mutual obstructions. For two years he devoted his brawn to the gridiron, but an injury directed his attentions along literary lines. Equal versatility aboard and ashore will make him a grand shipmate."

Scottie graduated in the top third of his class on 01 Jun 1939 from Annapolis. After sea duty on board the heavy cruiser USS Quincy (CA 39) from 26 June 1939 to 1 February 1941, Whitman began heavier-than-air flight instruction on 17 March 1941 at the Naval Air Station (NAS) at Pensacola, Fla. He earned his naval aviator wings there in Oct 1941 and then received further instruction at the Transition Training Squadron, Pacific Fleet, before he reported to Patrol Squadron (VP) 44 on 4 November 1941. On 07 Dec 1941, Lt Whitman was ordered to patrol duty along the California coast and shifted from Coronado NAS to the Alameda NAS in California.

Patrol Squadron Forty-four (VP-44) departed from the NAS, Alameda, CA for Pearl Harbor, T.H., in two divisions of six Consolidated PBY-5 planes each. Just prior to VP-44s departure, Whitman married Josephine Jackson of San Francisco, CA on 21 March 1942. The first division left the United States on March 26, 1942. The second, because of unfavorable weather, delayed its departure until April 12. Ordered to Midway for extended operations, PATRON 44 arrived at Eastern Island on the 22nd of May and began long range reconnaissance flights on 27 May. During the first few days of June 1942, the VP-23 and VP-44 PBYs based at Midway flew long patrols over the trackless ocean, searching for signs of enemy shipping. Then on 3 Jun came the first surface contact reports from the VP-23 PBY searchers. The following day, 04 Jun 1942, pilot Lt. (j.g.) Robert S. Whitman and his PBY-5A Catalina from VP-44 were airborne again when he reported contact at 0925 with enemy ships (probably the Japanese Occupation Force), antiaircraft fire, and that his aircraft was being "opposed by two enemy observation planes."

Japanese Mitsubishi F1M2 Type 0 float planes from the seaplane carrier Chitose attacked Ltjg Whitman's Catalina about 340 miles west of Midway. During the attack three of Whitman's crewmen ( Ensign Mosley, AMM3 Norby, RM3 O'Farrell) were killed and one mortally wounded (Ens. Camp), and the plane set afire. It is believed that Whitman was able to execute a controlled crash into the sea, but was himself killed on impact. AOM2c Philip L. Fulghum, the PBY’s bow gunner, continued to man his .50-caliber machine gun, and sent one of the attackers away trailing smoke. On his own initiative, with a crash imminent, Fulghum released the plane’s two 500-pound bombs. After the crash landing, AMM1c Virgil Ruel Marsh (flight engineer), despite the roaring flames, freed a rubber boat from the plane, which AMM2c John C. Weeks (gunner) repaired while in the water. Fulghum then assisted the wounded into the raft. He would be awarded the Navy Cross for his actions during this engagement. Aviation Chief Radioman Adams was seen to have cleared the wreckage of the aircraft, but in the rough seas he was separated from the other survivors and never seen again.

Several days later, June 6, 1942, a PBY from VP-23 commanded by Ltjg Norman K. Brady located the five men in the raft. He safely picked them up and returned them to Midway. Ensign Camp died on 07 June 1942 on Midway of his wounds. He was buried at sea a short distance from Midway with military honors. After the battle of Midway Patrol Squadron 44 returned to Pearl Harbor on 09 Jun 1942. Survivors of the only PBY to be shot down during the Battle of Midway were AO2 Philip L Fulghum, Ensign Lee C. McCleary, AMM1 Virgil R March and AMM2 John C Weeks.

Ltjg Whitman was reported as killed in action on 04 June 1942. His parents received a telegram on 18 June 1942 from the US Navy Department. It reads:

“The Navy Department regrets to inform you that your son, Lieut. (junior grade) Robert Scott Whitman, Jr., U.S. Navy, was killed in action in aircraft engagement with the enemy in the performance of his duty and in the service of his country on June fourth. Body not recovered. The Department extends to you its sincerest sympathy in your great loss.”

In grateful memory of Robert Scott Whitman, Jr., United States Navy, who died in the service of his country at Midway Islands, 5 June 1943 (Presumed). He stands in the unbroken line of patriots who have dared to die that freedom might live, and grow, and increase its blessings. Freedom lives, and through it, he lives – in a way that humbles the undertakings of most men.

A letter received in late June 1942 by Ltjg Whitman's parents from his squadron commander reads:

"I deeply regret having to inform you that your son, Robert Scott Whitman, Jr., Lieutenant Junior Grade, U.S. Navy, was killed in action with the enemy on June 4, 1942. The officers and men of Robert's squadron feel a deep personal loss in his passing. I had grown to know him well in the time he was in the squadron. I leaned heavily on him giving him responsibility after responsibility; he accepted them all cheerfully and did everything he attempted, excellently. He died bravely and with no thought of self. His last words were of warning to his crew of impending crash. This he did after being wounded and while endeavoring to bring his crippled plane down safely. His every action was in accord with the best traditions of our navy service and of our country. We are proud of him in his squadron. His remains were carried down with is plane."

USS Whitman (DE-24) was named in his honor. USS Whitman was an Evarts-class destroyer escort. The keel was laid on 7 Sept 1942 in the Mare Island Navy Yard, Vallejo, CA. She was launched on 19 Jan 1943; sponsored by Mrs Josephine P. Whitman, the widow of Lt.(jg.) Robert Scott Whitman. She was commissioned on 03 July 1943, decommissioned on 01 Nov 1945 and sold for scrap on 31 Jan 1947. The Whitman was sent promptly into the Pacific Ocean to protect convoys and other ships from Japanese submarines and aircraft. The Whitman earned four battle stars for service during WWII.

Retrieved from "http://usnamemorialhall.org/index.php?title=ROBERT_S._WHITMAN,_JR.,_LTJG,_USN&oldid=141692"
Categories:
This page was last modified at 13:29 on 9 September 2021.
About USNA Virtual Memorial Hall