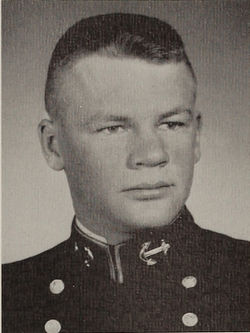 Hailing from the state of Washington, Steve comes here after graduation from R. A. Long High School in Longview. With a fine record in both academics and athletics in high school, he had little trouble adapting himself to the rigors of life at the Academy. Steve's athletic talent was varied as he was always looking for a new sport to master. He has been a member of the plebe squash team and various intramural teams ranging from gymnastics to Brigade Boxing. Other interests which captured his interest at the Academy were the Antiphonal Choir and NAFAC. Not having had much trouble with academics, Steve has enjoyed a good class standing, and has taken advantage of the overload program in the field of computers. Steve's amiable personality and his enthusiasm for life are valuable assets which promise him an interesting and successful career in the armed forces.

Unable to find any information about Steve's life or loss, except that he was "Deceased NAS, Pax River, MD" on June 22, 1971.

Steve has a memory marker at Arlington National Cemetery.

Retrieved from "http://usnamemorialhall.org/index.php?title=STEPHEN_J._ERICKSON,_CAPT,_USMC&oldid=10932"
Categories:
This page was last modified at 15:06 on 9 March 2017.
About USNA Virtual Memorial Hall