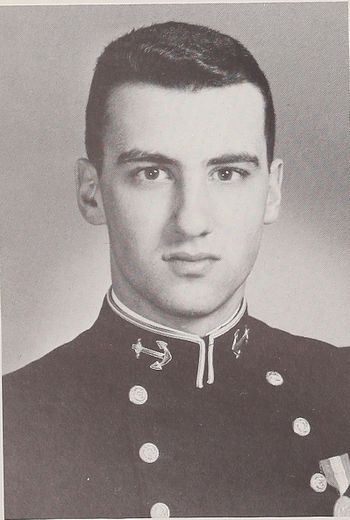 Tom reported to Canoe U. from Perkasie, Pennsylvania, only to find out that his charcoal curls and his picnic basket would not be tolerated. His intense pursuit of an Aero major at Navy left little time for Tom to practice his soccer or guitar during the week; but always time on the weekends for a party with the fellas or an occasional trip home. His goodnatured personality coupled with common sense, lack of pettiness and a very mature and professional outlook to the future will inevitably lead Tom to a rewarding life in the Navy.

Tom reported to Canoe U. from Perkasie, Pennsylvania, only to find out that his charcoal curls and his picnic basket would not be tolerated. His intense pursuit of an Aero major at Navy left little time for Tom to practice his soccer or guitar during the week; but always time on the weekends for a party with the fellas or an occasional trip home. His goodnatured personality coupled with common sense, lack of pettiness and a very mature and professional outlook to the future will inevitably lead Tom to a rewarding life in the Navy.

Thomas was lost on July 18, 1979 when the Harrier jet he was piloting crashed in Wettenberg, Germany. He was an exchange officer with the Royal Air Force's No. 4 Squadron.

In April 1965, as a senior at Pennridge High School, he spoke at the Rotary Club meeting on the Democratic Party discussing its history and major principles. A fellow classmate spoke on the G.O.P.

Just after entering the Naval Academy, he passed the requirements for the Academy Soccer team and the Catholic Choir. He also received two accuracy medals for long rifle range practice.

On May 7, 1967, his parents and friends went to the St. Patrick's Cathedral in New York City to hear Thomas and the Catholic Choir sing at its service.

Speaking at the assembly on Veteran's Day, Midshipman Thomas Pasquale, '65, said in part: "We have freedom to speak, think and act the way we please in this country. We want to keep this privilege for ourselves and even maybe help other people in the world attain the same rights. The U. S. government provides us with the military to protect us from our enemies. Draft card burning weakens and creates problems for our government in the eyes of other people in this world." He concluded his speech with a question, "Are you going to let our enemy stand by and watch us weaken ourselves so that they can walk in and take away our freedom?"

In March 1968, Thomas as member of the Glee Club went on a concert tour through the south and Midwest.

Thomas went home for the holidays in December 1968. He flew over the Pennridge area in a helicopter in an instruction lesson with a naval test pilot from Johnsville Naval Base.

At the Navy-Air Force game on October 20, 1973, "a jet streaked across the sky and dipped slightly over the stadium. The public address announcer intoned, 'that craft was piloted by Marine Lt. Thomas Pasquale, a graduate of the class of '69.' He had recently been promoted to Captain. Another Perkasie man was at the game with his son Midshipman Steve Long, another Pennridge graduate. (from the New Herald, Perkasie, Pennsylvania, Oct 24, 1973.)

In August 1978, Thomas was chosen to represent the Marine Corps in an exchange program with the Royal Air Force of the United Kingdom. As a Harrier pilot, he joined an English AV-8 Harrier Squadron in Whittering for eight months and then transferred to Gutersloh, a UK base in northern Germany for two years. He was accompanied by his wife Jennifer and daughter Samantha.

An Editorial: Those of us who knew Capt. Thomas Pasquale remember him as a warm and kind human being who epitomized "the All-American boy.

Tragedy claimed the life of the 32-year-old Perkasie military pilot who gave his life last Wednesday in an experimental jet-aircraft over West Germany.

And we emphasize the phrase "gave his life" because that is just what he did. He chose to go down with the plane, deciding not to eject and let the aircraft crash in a populated area.

Capt. Pasquale, who was soon to be named major, sacrificed his life for the safety of others. But that's the kind of guy he was – never looking for something in return from others.

At Pennridge High School, Pasquale was a clean cut youth who was both scholar and athlete. After attending the U. S. Naval Academy at Annapolis, he married his childhood sweetheart.

Pasquale transferred to the Marine Corps and for the past 10 years had been a pilot. Most recently, he was participating in a three-year exchange program with the Royal Air Force.

The family has our deepest condolences and we grieve along with them. Tom Pasquale's loss will be felt by the entire community and our country as well. Unfortunately, there is little refuge in the fact that he died a hero. We can all ease the pain of his passing by patterning our lives after his.

A Marine Corps pilot from Perkasie died yesterday in the crash of a military plane in Germany where he was serving with the Royal Air Force under an exchange program.

The victim was Capt. Thomas Pasquale, 32, the husband of Jennifer Schmidt Pasquale, and a veteran of about 10 years of military flying.

Pasquale was among a limited number of U.S. military pilots with extensive experience in flying Harriers, the jet-powered vertical liftoff fighter craft.

"We're numb," said Mr. and Mrs. Francis Schmidt of 625 Highland Drive, Perkasie. Mrs. Schmidt had talked to her daughter in Germany earlier yesterday in a general conversation to check on the daughter's back condition for which she was recently hospitalized.

"She was so happy, everything was great," said Mrs. Schmidt. "She said Tom was awaiting his promotion to the rank of major which was now assured. Three hours later the daughter called back. "She was in shock," said her mother. The daughter said her husband was killed in a crash.

The daughter said she was under the impression her husband's craft "exploded in the air over Germany and crashed. According to a Royal Air Force spokesman, the vertical takeoff fighter plane crashed in a field outside Giessen in central West Germany. An empty house and several other unoccupied buildings were damaged, the spokesman said from the Royal Air Force base in Moenchengladbach.

The Harrier was on a routine training flight from a north German base with three other aircraft when it crashed. The cause was not known.

Pasquale's mother, Mrs. Dominic Pasquale, resides at Ninth and Pine streets, Perkasie. Pasquale, a former soccer player at Pennridge High School, graduated from the Naval Academy about 10 years ago and transferred to the Marines.

He underwent flight training in Oklahoma and was an aide to Gen. Lester Brown before Brown became commander of Marine forces in the Pacific. He was stationed with the RAF at Guterslah, Germany. He, his wife and daughter, Samantha, 3, lived in Guterslah.

Pasquale was on a three-year tour of duty which began in England in September 1978 before the family was transferred to the base at Guterslah last December.

A full military funeral will be held Friday afternoon at Arlington National Cemetery for a Perkasie Marine pilot who was killed in a military plane crash over Germany early last Wednesday.

Services will be held at 1:45 p.m. Friday in Old Fort Myers Chapel in Arlington, Va., for Capt. Thomas Pasquale, 32. Burial will include full military honors.

A local memorial Mass is scheduled for Tuesday at 7:30 p.m. at St. Agnes Roman Catholic Church, Sellersville, where he was a member.

A graduate of Pennridge High School and the U.S. Naval Academy at Annapolis, Pasquale was killed when his experimental jet aircraft apparently malfunctioned and he chose to go down with the plane rather than have it crash on a populated area in Central West Germany. The crash occurred outside the city of Giessen.

Pasquale, son of Mrs. Dominic Pasquale, Ninth and Pine Streets in Perkasie, was one of a limited number of U.S. military pilots who were experienced in flying Harriers, jet-powered vertical lift-off fighter craft. He was making a routine solo flight when the plane malfunctioned and he chose to crash in a desolate area rather than eject, and thereby risk the lives of those on the ground.

Marine Corps spokesmen at the Cherry Point, North Carolina air station where Pasquale was stationed before going to Germany in an exchange program with the Royal Air Force, said Pasquale had more than eight years experience piloting the craft.

Capt. Pasquale was married to the former Jennifer Schmidt, daughter of Mr. and Mrs. Francis Schmidt, 625 Highland Drive, Perkasie. She and her three-year-old daughter Samantha, returned to Perkasie Saturday night, where they will make their home.

The Schmidts first learned of the death last Wednesday afternoon when their daughter called them from Germany to tell them her husband was killed in the crash. They had just spoken to her hours before and said she had been very happy. She had told them how Tom was awaiting his promotion to the rank of major and it was now assured.

At that time the daughter said she believed her husband's craft had exploded in the air and crashed.

Mrs. Schmidt explained that her son-in-law was in communication with a friend and co-pilot who was flying beside him. "He knew he would have to bring the plane down, Mrs. Schmidt said, "so he chose to go down with the plane rather than ejecting."

The plane crashed in a field outside Giessen. An empty house and several other unoccupied buildings were apparently damaged.

The Schmidts had visited their children in Germany just 6 weeks ago. "Tom was a marvelous diplomat and representative for our country," she said. "He was always ready to do for everyone." In the end, he gave his life for others.

Pasquale had been a top scholar, soccer player and athlete at Pennridge, graduating in 1965, and went on to Annapolis, graduating about 10 years ago before transferring to the Marines.

He had undergone flight training in Oklahoma and was a top aide to Gen. Lester Brown before Brown became commander of Marine forces in the Pacific.

He had served in England before being transferred to Guterslah last year.

He had known his wife since kindergarten and they had been married in a military wedding in Oklahoma. They celebrated their ninth wedding anniversary only two weeks prior to his death.

Pasquale was on a three-year tour of duty which began in England in September 1978 before the family was transferred to the base at Guterslah last December.

His wife and daughter were escorted home by Capt. Steven Fisher of Washington D.C., who is staying with the Schmidts for 7-10 days. Fisher, stationed in England, attended the U.S. Naval Academy with Pasquale and was a close friend.

Said Mrs. Schmidt, "The family wishes to thank our many friends for their thoughtfulness during our very bad days. Tom was a person who will be missed much by his family as well as his friends. He was a person who gave so much and was loved by all of his service associates."

The family has requested that in lieu of flowers, contributions be made to the Thomas Pasquale Memorial Fund at First Federal Savings & Loan Association of Perkasie.

Thomas is one of 17 members of the Class of 1969 on Virtual Memorial Hall.

The "category" links below lead to lists of related Honorees; use them to explore further the service and sacrifice of the alumni in Memorial Hall.
Retrieved from "http://usnamemorialhall.org/index.php?title=THOMAS_D._PASQUALE,_CAPT,_USMC&oldid=135168"
Categories: