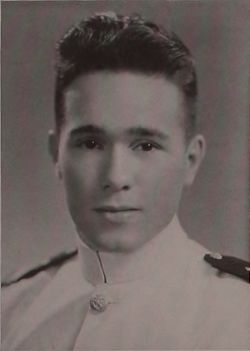 There is something about those smiling Irish eyes that one can't exactly describe. It is quite hard to conceive anyone so taciturnly smooth and good natured, so even tempered and likable. "Spud" never has a dull moment for he possesses originality and tact to entertain himself and acquire an air of self reliance. No one has more faith in himself than "Spud," for "Spud" is always right. Reading good books is his best hobby, while munching some of that good Nebraska chow of which he has a never ceasing supply. "There is nothing like good Irish chow," "Spud" says, "the way they make it in Nebraska." And so with an Irish cookie in one hand and the Irish or Nebraska flag in the other he raves madly on. The strong silent type are usually "Red Mikes" but not "Spud"; for hardly ever is he stagging in at Dahlgren. "Spud" has all the requisites for getting along, in any group or crowd, and some day we're going to see him on top.

The Class of 1941 was the first of the wartime-accelerated classes, graduating in February 1941.

Thomas was lost when USS Boyd (DD 544) was damaged by Japanese shore batteries during an attempted rescue of a downed aircrew near Nauru Island on December 7, 1942. He was the only officer lost; 11 men were also killed and 8 wounded.

At 1033 while returning to form up with carrier group BOYD left formation as ordered by Commander Task Group 50.8 to pick up survivors of a plane crash first reported 12 miles southwest of island. At 1038 a raft was reported in position 2 miles west of island. During approach, a plane reported to CTG (Commander Task Group) 50.8 who direct BOYD to proceed on assigned rescue and 3 planes were ordered to assist in the search. At 1130 plane dropped smoke float near raft, and BOYD made approach. At 1125 a lookout reported object in water, which looked like a man waving his hand in the air. At 1140 BOYD stopped between life raft, which was carrier plane type and upside down, and the island; object was identified as smoke float or float light. At 1142 two shells hit the ship, on exploding in forward engine room, shearing or puncturing all steam lines and main power distribution board, the second exploding inside #1 stack. BOYD immediately commenced maneuvering radically (chasing salvos) and began counter battery fire using manual control. In retiring, ship was straddled at least five times, the second four gun salvo exploding close aboard to port damaging guns 24 and 26 and piercing an air flask of an after torpedo. In this attach all personnel of the forward engine room, with the exception of one MM2 who was seriously burned, were killed. Damage control measures were taken to plug the hole in the side and pump water from the forward engine room space. Total casualties were one officer and 11 men killed, 8 wounded. Burial of 10 of these was held on 9 December. Two died later after transfer to ALABAMA and were interred at Espiritu Santo.