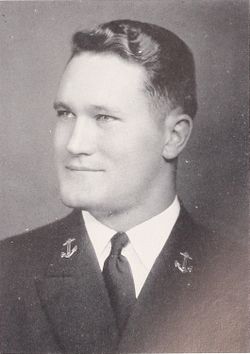 From the sands of Arizona "Tiny" came to the Navy ready for a scrap. Generally as gentle as a St. Bernard, nothing suits him better on the gridiron than a fight. Tom is ambitious in both athletics and academics. Plebe year it was shadow boxing his roommate, the "Shadow;" second class year, playing with a sixteen pound ball. Tiny is kind-hearted, generous, and always ready to render aid to his classmates. Claiming he is always losing weight, he diets on four desserts. A regulation fellow, well-liked, and respected by all, the Navy has in him no better material for a leader, an officer, and a gentleman. 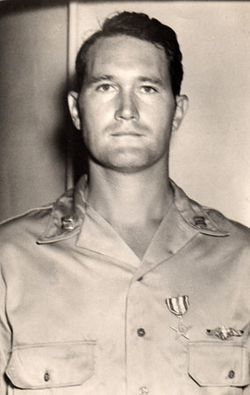 The President of the United States of America takes pride in presenting the Silver Star (Posthumously) to Lieutenant Thomas Patrick McGrath (NSN: 0-85072), United States Navy, for conspicuous gallantry and intrepidity in action as First Lieutenant and Damage Control Officer of the U.S.S. POMPANO (SS-181) during three successive and aggressive War Patrols of that Submarine during World War II, which resulted in the sinking of an important amount of enemy shipping. On the occasion of a surface engagement with a 900-ton armed enemy patrol vessel he manned a machine gun in an exposed station and in the face of heavy enemy machine gun fire maintained an accurate and effective fire from the gun which directly contributed to the total destruction and sinking of that enemy ship. His conduct throughout these three patrols was in keeping with the highest traditions of the United States Naval Service.

He was also awarded the Bronze Star, but unable to find the citation.

Thomas is listed as a LCDR in a majority of references. Memorial Hall lists him as a LT.