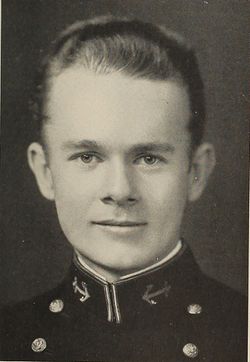 Four years ago Walt came forth from the "wilds" of New Jersey to conquer a new adversary, academics at the United States Naval Academy. To do this he gave up his desire to become a second Guy Lombardo. Studies have never proved a problem and he can always be seen dragging on the week ends. Women are his only worry. To lie on his bunk any afternoon of the week is a big waste of time. All his spare moments must be spent in keeping up his correspondence. Since he would rather learn new stunts on the horse and parallel bars than sleep, he has made himself into a star man on the gym team. Industrious, neat, and cheery, Walter will always be missed if not in the crowd. He is certain to achieve success. We wish him luck!

Walter was lost when USS Capelin (SS 289) was lost in early December 1943, possibly to a mine or surface attack.

The President of the United States of America takes pride in presenting the Silver Star (Posthumously) to Lieutenant Commander Walter Allen Sharer (NSN: 0-81380), United States Navy, for gallantry and intrepidity in action against the enemy in the line of his profession as Sound Officer in the U.S.S. SALMON (SS-182) during four War Patrols in enemy controlled waters during World War II. As Officer-of-the-Deck, on one occasion, he sighted two enemy destroyers and maneuvered his boat into a favorable firing position. His skill in operating the sound gear and his gallant action during severe enemy counter efforts contributed directly to the success of the SALMON in sinking one enemy cruiser and one destroyer and in seriously damaging another cruiser with two torpedo hits. His conduct throughout was in keeping with the highest traditions of the United States Naval Service.

Though the citation above is a posthumous one, he was presented the award in person in March 1943.

Some documents — including the Silver Star citation above — have him as a LCDR.

Retrieved from "http://usnamemorialhall.org/index.php?title=WALTER_A._SHARER,_LCDR,_USN&oldid=24699"
Categories:
Hidden category:
This page was last modified at 14:03 on 4 June 2021.
About USNA Virtual Memorial Hall