William Henry Boardman was admitted to the Naval Academy from Massachusetts on September 5, 1896. 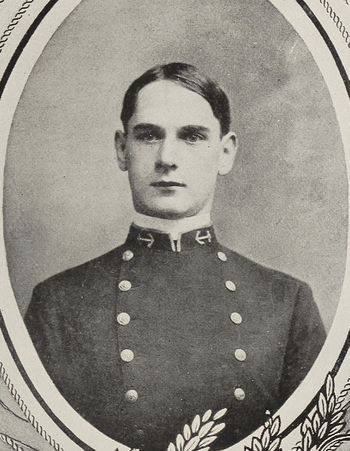 The 1900 Lucky Bag has a picture of a plaque with the below inscription:

Wounded during the Spanish-American War at Cape San Juan Puerto Rico while a volunteer member of a party landed from the U.S.S. Amphitrite for the defense of women and children. He died on board his ship August 10, 1898.

William H. Boardman was the only U.S. Naval Academy cadet (as midshipmen were then known) out of 123 that served on ships actively engaged in combat operations who was killed in the Spanish American War. During the war, he served aboard the cruiser USS Newark and later on the monitor USS Amphitrite. Boardman was one of 7 officers and 28 sailors in a landing party from USS Amphitrite that went ashore at Cape San Juan, Puerto Rico on the night of August 6, 1898.

Their orders were to secure, relight and defend the Cape San Juan lighthouse and 60 women and children from the neighboring town of Fajardo that were accepted in protective custody by the Amphitrite's captain at the request of Fajardo civic leaders. The civilians were in danger of a Spanish reprisal for their allegiance to the Americans who ultimately defended them and held the lighthouse against an attack by 200 Spanish troops in the Battle of Fajardo.

Boardman and three sailors under his command were the first men to enter the darkened lighthouse. Finding the lighthouse deserted, Boardman directed the men to lay aside their loaded weapons as they prepared to climb the spiral staircase to the light. He was mortally wounded when his revolver fell from its faulty holster, struck the marble floor and fired into his groin. Initially the ship's surgeon believed Boardman's injury was a flesh wound. He was rowed back to the Amphitrite that night and passed away two days later aboard his ship.

Sadly, Cadet Boardman's body could not be returned to his grieving mother for burial in Massachusetts. A suitable casket for the voyage to return his remains could not be found in San Juan and Boardman's mother obtained permission from the Navy Department to send a metallic casket there. Her son's remains were being taken from shore in a small boat to a supply ship for transport home when the boat capsized and the metal casket went to the bottom of the Caribbean Sea off Palomino Island, Fajardo. A memorial tablet to Cadet Boardman, who ranked at the top of his class, was erected by his classmates at the U.S. Naval Academy.

He has a memory marker in Massachusetts.

William is listed on the killed in action panel in the front of Memorial Hall under the heading "SPANISH-AMERICAN WAR 1898."

William is listed as a Midshipman; he was a "Naval Cadet." Also, though he is listed on the killed in action panel in the front of Memorial Hall, his loss was in no way due to enemy action.

William is one of 6 members of the Class of 1900 on Virtual Memorial Hall.