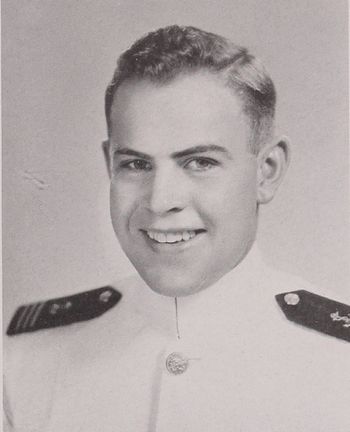 He was survived by his wife, Mrs. Margaret Lucas Turner.

On Eternal Patrol shows that he was awarded the Bronze Star; unable to find a citation.

From "The Voices of Bombing Nineteen":

Our first sign that we were about to be picked up came when some fighters started buzzing us. They dropped a couple of smoke lights to mark us, and we threw dye marker around like mad, me getting most of it on myself. The sub finally came into view, and what a beautiful sight it was! Harvey and I almost fell overboard trying to wave at it. After a little trouble we got aboard OK, and what a comfortable feeling that is!

So help me, these sub boys are the tops. Nothing is too good for you when you come aboard under our circumstances. We got a hot shower, clean dry clothes, cigarettes, coffee, hot soup, etc. All we had to do was name it, and we could have it. After being introduced all around and trying to put something in my stomach (which wouldn't stay), I hit the sack. Harvey did the same aft in the men's quarters. When I woke up it was time for chow, so I tried it again, and it stayed down this time. By the way, their food is the tops. After having a little more bull session, the topics being planes and subs, I hit the sack for good that night, winding up what I would call a "rather full day".

5 August 1944 - I wandered around the ship wondering what all the gadgets were. I got the word on the general run of the ship from one of the officers who took me on a sightseeing tour. We had to make several dives that day and night, just because some "fly-fly boy" (the sub boys' pet name for us) forgot his "trigger". We were still playing lifeguard and went hunting for one of our planes that was forced down - no luck, though.

The chow on these boats amazed me more every time we ate. I was up on the bridge for a few minutes and later had my first look through a periscope. We had to make a couple of fast dives that night - bogies, I guess. I hit the sack about 10 PM to wind up my first full day aboard one of Uncle Sam's subs on patrol.

6 August 1944 - I woke up about 0700, just in time to have breakfast with the Skipper, who, by the way, is one hell of a swell guy. After that I went up in the conning tower to see what was going on. They let me take the helm for about a half hour, but that's enough said about that, because the wake, after I got through, looked like the trail of a snake with a broken back. I then had a long look through the periscope at "my island". For some reason, it still looked rather innocent. My thoughts about its innocence had another rough jolt when right in the middle of lunch a couple of Hamps or Zeros slipped up close on us before we saw them. Our lookouts saw them in time, however, for us to get pretty well below the surface with a fast dive before they could drop their depth charges. They dropped them just the same, though. Three of them went off - WHAM! (pause) WHAM! WHAM! It happened so fast it was over before I realized what had happened. There was no damage, however, and it didn't seem to impress anybody very much. I don't mean that these guys like to get dropped on, but I guess one can get accustomed to most anything. Not five minutes after this happened, somebody suggested a poker game, so I joined all the officers who were not on duty and got wound up in the pasteboards. I proceeded, as per my usual game, to lose $6.50. This broke up before chow, so this gave me time to wash up and shave (?) I shaved for my first beard that day. It was only a few days gone, but it promised to look pretty sharp in about a month.

Back to this subject of chow - that word "chow" is a masterpiece of understatement. It's like eating at your favorite restaurant every meal.

That night we had roast chicken, mashed potatoes, carrots and peas, gravy, olives, coffee, and, last but not least, the best ice cream I'd had since I left the states. Pineapple was the flavor, and was it good! After dinner we went to "darken ship". That means that all white lights are turned out and there is nothing but red ones on. This is done so they won't be blind when they go up on the bridge for their watch.

I've noticed a few little things. First, the uniform - it's great - shorts and a "T" shirt. That's it for everybody, from the Skipper to the lowest rated man in the crew. Second, sleeping - there doesn't seem to be any regular hours for it. Everybody seems to sleep when there isn't anything else to do or when they are not on watch.

7 August 1944 - I woke up about 0700 to start a very quiet day. It was getting so that I woke up automatically at this time every morning, just in time for breakfast. I sort of had to get up, though, because my sack was just about one-half of all the seats in the wardroom. After breakfast the Skipper and I played a game of Gin Rummy. I managed to win from him, too. I had a very close look at one of the Japs' "unsinkable" aircraft carriers through the periscope. If there had been any Jap wahinies on the beach we would have been able to see them. We sure as hell were close enough. This was the first day since I had been aboard that they hadn't been looking for some more "zooms" like me to fish aboard. We were strictly on the hunt that day. After noon chow (which was good as usual), I hit the sack for a couple of hours since there was nothing much else to do. We submerged about 0230, and at about 1900 we surfaced. At 2230 I was up on the bridge. I noted: "There is almost a full moon and the sky is as clear as a bell. Our course right this minute is right up the moon path. There's a slight breeze which makes it just about perfect. (Perfect is right, just about right for one of those little bastards to slip up on us.) I think the general opinion is that it's a hell of a night to fight a war. It's about time I hit the hay for a little shuteye."

8 August 1944 - One of the Japs' fly-boys pulled a very dirty and unethical trick. It was strictly not according to Hoyle. The Japs, being very cagey and observing, noticed that when one of our flyers is floating in his little rubber boat in this big ocean at night, he proceeds to let anybody know where he is by shooting a certain color flare. Well, the slant-eyes figured this was a good chance to get a shot at one of our subs or anybody who came around hoping he can do his good deed for the day by dragging some poor devil out of the drink. So they dropped a few flares from a plane every now and then and then moved off a little way and waited developments. This is just what happened. Naturally, when our lookouts spotted the flare, we started towards it, knowing full well it could be a trick, but that didn't seem to bother these sub-boys. I guess they figured there just as well could be somebody out there, and they were going to find out if there was - and if not, who in hell was yelling "wolf"? Well, a Jap plane jumped us, but we dove away from him with no trouble, except that the diving horn woke me up. "Tsk, tsk - no manners, these Japs". The Skipper also has his own name for them. To quote, "(censored)", unquote!

NOTE: The above was written aboard the USS Shark. After spending a month aboard, plus a wonderful two weeks leave with the crew of the U.S.S. Shark at the Royal Hawaiian Hotel, arranged by the Skipper, I never saw them again. The U.S.S. Shark II (SS-314) was reported overdue and presumed lost with all hands as of 24 October 1944. Bill Emerson

William is one of 66 members of the Class of 1944 on Virtual Memorial Hall.

The "category" links below lead to lists of related Honorees; use them to explore further the service and sacrifice of the alumni in Memorial Hall.
Retrieved from "http://usnamemorialhall.org/index.php?title=WILLIAM_H._TURNER,_LTJG,_USN&oldid=64613"
Categories: