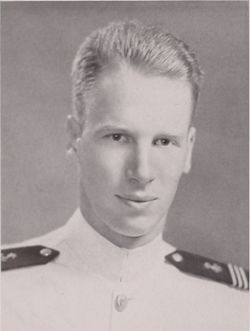 After beginning his academic career rather unconventionally in a Kansas City school for young ladies, Bill decided to enter the academy in an attempt to live down his shameful past. Restless by nature, he polished brass in the Boat Club, blew fuses with the Juice Gang, debated with the Quarterdeck Society, and kicked shins playing battalion soccer endeavoring to escape the radiator squad. Definitely not a red mike, his troubles with the unfair sex were a constant source of amusement to his friends. The same humorous pessimism that helped him to solve these little difficulties should be invaluable to Bill in his later life.