William V. W. Reily was admitted to the Naval Academy with an At Large appointment on September 22, 1870 at age 16 years 9 months. There is no record of his resignation or dismissal; he does not appear in the Annual Register of the United States Naval Academy 1871-1872, which would have been his 3/c year. The Register of Alumni lists him as a non-graduate member of the Class of 1875. 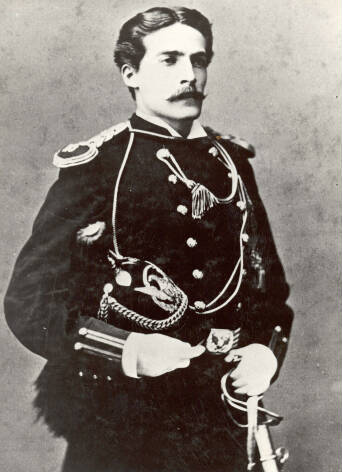 William Van Wyck Reily, Little Bighorn U.S. Military Officer. The son of William and Ellen T. Roche Reily, his father graduated from the US Naval Academy in 1847, and was lost in the Straits of Formosa, off China, while serving on the USS Porpoise on Sept. 21, 1854. Also lost on the vessel was William Van Wyck, for whom young Reily was named.

Reily's widowed mother remarried Col. Simeon M. Johnson in 1861; he died in 1871, and her third marriage was to Rear Admiral John C. Febiger, USN. William Reily was appointed to the US Naval Academy in 1870, and after failing three examinations, resigned in Oct. 1872. He participated in a surveying expedition to Nicaragua, Dec. 1872 to July 1873, and later was employed at the Washington Navy Yard supervising the dismantling of monitor class warships.

On Oct. 15, 1875, he obtained a direct appointment as 2nd Lt., 10th US Cavalry. He transfered to the 7th US Cavalry on January 25, 1876, and joined Company E at Fort Lincoln, Dakota Territory, on April 17. 1876. One month later he rode from the Fort with his regiment to participate in the Sioux Campaign.

Temporarily assigned to Company F, 7th Cavalry, Reily perished with Lt.Col. George A. Custer's battalion at the battle of Little Bighorn. His body was found on Last Stand Hill. Originally buried on the field, his remains were recovered the following year, and on August 3, 1877, interred in Mount Olivet Cemetery, Washington, DC. A signet ring that Reily wore at the time of his death was later recovered from an Indian who surrendered at Fort Robinson, NE in April, 1877. The ring is in the collections of the Smithsonian Institution, Washington, DC.

William never met his father, who had left on the expedition that resulted in his death in June 1853.

From the Museum of Northwest Colorado:

The museum has had a Custer Colt in our collection for years. While it was already a significant firearm, new information possibly makes it one of the most historically significant Colts in any collection anywhere.

A “Custer Colt” is a well-known term for historians and collectors. It’s a Colt revolver within a serial number range that gives it an increased possibility of having been issued to Custer’s 7th Cavalry and possibly used during the 1876 Battle of Little Bighorn. However, while there are several thousand Colts that fit within the Custer serial range, there were only 650 or so 7th Cavalrymen engaged in Little Bighorn. Therefore, the chances of a Custer Colt having any relation to one of Custer’s men are pretty low.

Also, take into account that about 250 of the 7th Cavalry died during the battle. Most of their firearms would have ultimately been acquired by the victorious Lakota Sioux, Northern Cheyenne, and Arapahos. Of the remaining Colts, only a handful are proven to have been issued to Custer’s Cavalrymen.

As for the museum’s Custer Colt, most of its serial numbers were inexplicably filed off long ago. Fortunately, one of the numbers can still be made-out under magnification, and another can be found whole under the ejector tube. The serial number is #5126, which puts our Colt in a very prime range for 7th Cavalry issue.

We recently revisited our Custer Colt to see if any new information had surfaced over the years. Imagine our excitement when it had!

An auction in 2014 saw the sale of a Custer Colt with serial #4815 which had an interesting story attached. The auction provenance mentioned a document found in Ft. Abraham Lincoln during its demolition. It outlined the proceedings of an inquiry held April 24, 1876 (just two months before Little Bighorn) against Lt. William Van Wyck Reily of the 7th Cavalry. At issue was Lt. Reily’s service-issued Colt revolver having been stolen. Reily was required to repay the U.S. for the loss and was issued revolver serial #4815 as a replacement. The stolen revolver, the document stated, was none other than the museum’s #5126!

Though we are still authenticating this document, the new information possibly gives our firearm not only a direct link to Custer’s 7th Calvary, but also to an exact individual. We can’t fully express how extremely rare this is. The document may also explain why the serial numbers on the museum’s Colt were filed off in an effort to cover up its theft.

The news of this discovery has already attracted a personal visit from one of the most knowledgeable firearm experts in the field, Dan Cullity. He stated the gun appears to be absolutely authentic.

Lt. Reily died on Little Bighorn only two months after losing his Colt #5126. It is currently on display here at the museum.

A special thanks to Craig’s own Charlie Williams. Charlie recently provided the museum with a research discovery that has significantly helped advance our authentication efforts.

William's father, William Reily '47 was lost in 1854 when his ship disappeared.

William was named for his father's classmate and shipmate William Van Wyck '47.

William is not listed with his classmates in Memorial Hall, nor is his name included on the killed in action panel. This omission was accidentally discovered when there was confusion over the names and relation of William Van Wyck '47 and William Reily '47.

William is one of 4 members of the Class of 1875 on Virtual Memorial Hall.

The "category" links below lead to lists of related Honorees; use them to explore further the service and sacrifice of the alumni in Memorial Hall.
Retrieved from "http://usnamemorialhall.org/index.php?title=WILLIAM_V._W._REILY,_2LT,_USA&oldid=120374"
Categories:
Hidden categories: