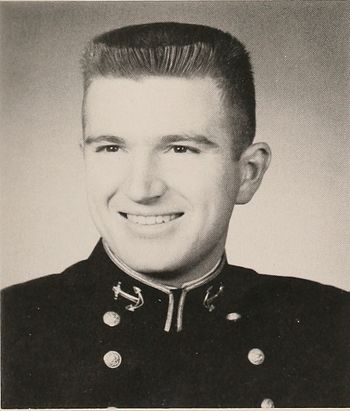 Though he is included on this website, Bud was not on active military duty the morning of September 11, 2001, and is not listed in Memorial Hall. 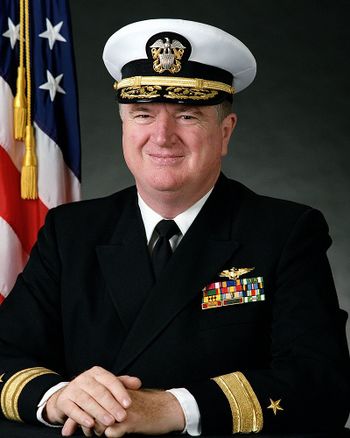 From The National 9/11 Pentagon Memorial:

He was a 1956 graduate of Corona High School, Corona, California and a 1961 graduate of the U.S. Naval Academy. He married his high school sweetheart, Dee, immediately after graduation. Admiral Flagg went on to flight training and was designated a Naval Aviator in 1962 and became qualified in the F-8 Crusader. Two of the three deployments to Southwest Asia that he made on the U.S.S. Oriskany (CVA 34) were combat cruises. He left active duty in 1967 and joined American Airlines and the Naval Reserve, enjoying successful careers in both.

As a Naval Reserve officer, Rear Admiral Flagg commanded two Naval Air Reserve F-8 squadrons and two Naval Air Reserve Force augment units. He served in the Pentagon as Special Assistant to the Honorable Fred Davidson, Deputy Assistant Secretary of the Navy for Reserve Affairs, and as Assistant Chief of Naval Operations for Air Warfare. He also served as Assistant Chief of Staff, Readiness and Training on the staff of Commander Naval Air Forces U.S. Atlantic Fleet, and as Deputy for Reserve Affairs on the staff of Commander in Chief, U.S. Atlantic Fleet. He was selected for promotion to Rear Admiral in 1986; retiring in 1995 with two stars. He retired in 1998 from American Airlines as a captain.

He was a member of the Blue Ridge Hunt Club and an active member of Grace Evangelical Lutheran Church in Winchester, Virginia. He and his wife, Dee, operated Daybreak Farm in Millwood, Virginia. The farm kept both very busy and certainly was, in many respects, a work of love. The neighbors and passersby watched the fields, the fences, the barns become more and more beautiful under their care. The farm served as a gathering point for their family and the grandchildren spent many special days, summers and years with their ‘special’ grandparents.

Two sons, Marc Flagg of Boca Raton, Florida, and Michael Flagg of Millwood, Virginia; a sister, Patricia Sellek of Las Vegas, Nevada; and four grandchildren survive Rear Admiral Flagg. While we mourn the loss of this wonderful human being and accomplished professional, we are comforted in knowing that he was the other half of a perfectly matched set.

"There were only five people to ever surpass 3,000 hours of flight time in an F-8 Crusader. My dad was not only the fifth, but he was the last and also the highest. As a naval aviator, you can think of the movie 'Top Gun' and certain nicknames, like 'Maverick,' 'Goose,' 'Ice.' He had many names going through naval aviation. He was known as 'Hawk.' After this achievement, he was given the nickname 'Mr. Crusader.'" -- Michael Flagg, son

The weekend before they died, they went to his 40th college reunion.

Among the stories told by returning members of the U.S. Naval Academy Class of 1961 was the one about how Bud Flagg cured his classmates of raiding his CARE packages. He switched a batch of Dee Embree's good cookies with his own batch loaded with laxatives -- and nobody messed with him again.

Wilson "Bud" Flagg served on active duty from 1961 to 1967, including three tours as a fighter pilot in Southeast Asia during the Vietnam War. After that, he had dual careers as an American Airlines captain and an officer in the Naval Reserve, retiring from the Navy in 1995 as a rear admiral and from the airline in 1998.

In the early '90s, the Flaggs -- who were high school sweethearts and married when he graduated from the academy -- moved to a Millwood cattle farm in Clarke County, Va. When Flight 77 crashed into the Pentagon, they were on board, heading to a family gathering in California.

Both Flaggs were 62 and, according to his classmate Chuck Morris, "extraordinarily affable."

Darlene "Dee" Flagg was a 1960 graduate of the University of California at Santa Barbara and taught school in Annapolis till Bud graduated.

Bud Flagg attended flight school in Pensacola, Fla., and became a Navy pilot in 1962. After leaving active duty, he continued flying the F-8 Crusader and logged more than 3,200 flight hours.

His career was blemished by the 1991 Tailhook Association scandal. In 1993, he was one of three top officials who received letters of censure for knowing about but failing to stop extensive incidents of sexual harassment at the association's Las Vegas convention.

His academy roommate, retired Navy Lt. Cmdr. Leo Willetts, said Flagg knew his duty as a senior officer and accepted the punishment as best he could.

The Flaggs lived in Mississippi, California and Connecticut before settling on the cattle farm. They also had a home in Las Vegas. Dee Flagg was active in Grace Evangelical Lutheran Church in Winchester, Va., and the Greenway Garden Club in Clarke County. Both were members of the Blue Ridge Hunt.

They leave two sons -- Mark, of Florida, and Michael, of Clarke County -- and four grandchildren.

We had a USNA Class of 1961 Class reunion the weekend before 9/11. I was glad to see and visit with Bud and Dee then. What a sad, unkind, and unjust way for a US Navy Admiral to end his human experience. We had a class picture taken at the hotel. My thoughts and prayers go out to his family.

I had the honor of serving on Admiral Flagg's staff at Naval Reserve Readiness Command Region Two, in Scotia, NY. A man of large stature with a heart of gold as large too match. In my entire naval career I don't think I ever met an individual who was more concerned about his troops as Admiral "Bud" Flagg. I still have my evaluations signed by the Admiral and will cherish them as I do my time served on his staff.

On this 7th anniversary of 9/11, to Mark, Michael, and the family, your dad was a gentleman, warrior and American hero; it was my privilege to have served with him.

The term "Officer and Gentleman" falls short of describing your dad, there was no finer individual than Admiral "Bud" Flagg.

Wilson is one of 23 members of the Class of 1961 on Virtual Memorial Hall.