Clarence Louis Adrian Ingate was admitted to the Naval Academy from Alabama on May 20, 1884 at age 16 years 4 months. 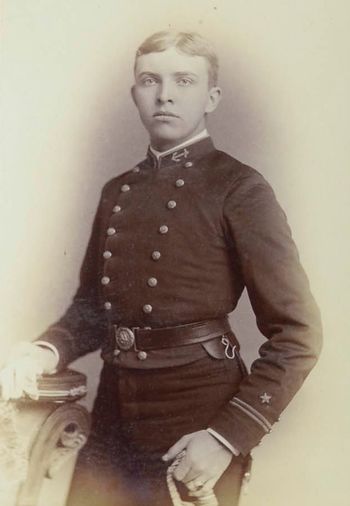 Clarence died on December 23, 1899 "from gangrene following an operation" while "attached to the marine barracks, naval station, Agana, Guam."

He made a name for himself by his gallant conduct on the occasion of the wreck of the historic Kearsage, off Colon, Central America, in February 1894. The vessel was on the rocks, threatening to break in two. A fire broke out below and young Ingate headed a party of volunteers and went down into the ship, facing the smoke and flames and subduing them. Had this not been done the crew would have had to abandon the vessel in the midst of a severe storm, and some would have been lost. Thanks to his bravery and of those who followed him, all were saved, and a greater part of the vessel’s stores and furniture. Captain Ingate was a finely formed, handsome man, bright of intellect, and a credit to the navy and to his home.

On February 18, 1898, the USS Maine exploded and sunk at the Havana Harbor. Clarence headed a detail of marines who attended the mass given in their memory at the Church of the Sacred Heart in Brooklyn on February 22. On April 21, war was declared with Spain.

On June 14, Clarence was at Camp McCalla, Guantanamo Bay. Four scouting parties of marines were sent out to rout the Spaniards who had been shooting at them from the woods and brush since the marines landed on Friday. Clarence was in charge of the fourth group from the First Marine Battalion, Company B, composed of fifty marines and a Cuban guide. Becoming lost in the dense undergrowth, Clarence felt their guide had misled them intentionally and had him arrested. The group then returned to camp. The other three parties, headed by Captain G. F. Elliott of Company C, Captain W. F. Spicer of Company D, and First Lieutenant J. E. Mahoney of Company E, successfully routed the Spaniards.

Two of Captain Spicer’s soldiers were killed by guerilla bullets, Sergeant Charles H. Smith and Acting Assistant Surgeon John Blair Gibbs. Clarence took out a party to try and get the body of Sergeant Smith who had been killed by a bullet while on picket duty. The party was composed of twelve marines and ten Cubans. The body had been lying within the enemy’s lines nearly two days, and consequently any mutilating by the Spaniards could easily have been accomplished. However, the body was found with only a bullet through the breast -- no barbarity whatever. Clarence’s force reached the American lines safely.

Clarence was stationed on the receiving-ship Vermont. He attended the third dance given by the commanding and ward-room officers of the ship. Flags of all nations were used in decorating the deck of the Vermont, and refreshments were served in the ward room. Representatives from all the ships in the yard were present.

His father Captain Frederick Ingate was a cotton buyer and owner and manager of the Spring Hill Railroad.

Clarence is buried in Alabama.

Clarence is one of 4 members of the Class of 1888 on Virtual Memorial Hall.

Retrieved from "http://usnamemorialhall.org/index.php?title=CLARENCE_L._A._INGATE,_CAPT,_USMC&oldid=139420"
Category:
Hidden categories:
This page was last modified at 16:39 on 14 July 2021.
About USNA Virtual Memorial Hall