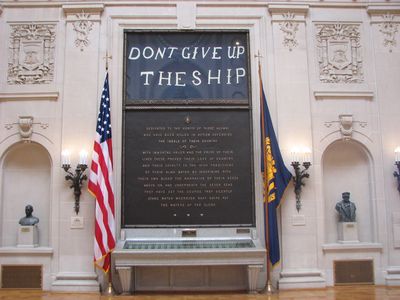 In the front of Memorial Hall there is a panel with the names of those alumni lost in combat action against enemies of the United States of America.

The list below is nearly identical; a handful of alumni that appear in the wrong conflict are not removed, nor are those who did not die or did not die in action against an enemy force. Some alumni who should be on the panel have been added to this list, and spelling corrections are reflected below. The fourteen alumni lost on September 11, 2001 are also included here, though the seven who were not on active duty are not eligible for inclusion in Memorial Hall.

DON'T GIVE UP THE SHIP

Dedicated to the honor of those alumni
who have been killed in action defending the ideals of their country.

With immortal valor and the price of their
lives these proved their love of country
and their loyalty to the high traditions
of their alma mater by inscribing with
their own blood the narrative of their deeds
above, on, and underneath the sevens seas.
They have set the course. They silently
stand watch wherever navy ships ply
the waters of the globe.

Though we remember and honor the service and sacrifice of the alumni marked with a ★ on this website, they are not eligible for inclusion in Memorial Hall.

(previous page) (next page)
Retrieved from "http://usnamemorialhall.org/index.php?title=Category:KIA&oldid=161569"
This page was last modified at 09:00 on 19 January 2023.
About USNA Virtual Memorial Hall