John Connell Tucek was admitted to the Naval Academy from Illinois on August 26, 1942 at age 20 years 1 months. He resigned on January 14, 1943: "Deficient in studies. Forced to resign."

John Connell Tucek is listed among those “gone but not forgotten.” 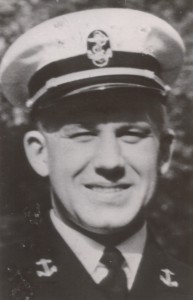 Known as “Jack,” he became a deck cadet in the Merchant Marine in World War II. He enlisted on January 15, 1943, and after a short training course at the Long Island School of the Maritime Commission, went to sea on the S.S. James Sprunt’s maiden voyage. She was torpedoed and sunk on March 10 southeast of Guantanamo Bay by the German U-boat U-185, August Maus. Her cargo exploded, and she disappeared in 30 seconds. A ship 40 miles away witnessed the explosion which killed all 68 crew members.

Jack was born in Brooklyn and moved in 1925 to Rutherford, New Jersey. He became a high school football star and captain of the team in 1940 with an 8-1 record. He was All-County fullback for two years and on the Group 3 All-State team in 1940. In his high school yearbook of 1941, his nickname was “Baron,” and his ambition was to be in the Diplomatic Service. He was mentioned in the yearbook’s “Milestones.” For October 20 – “The Red Cross Council gives us a double feature plus a pep talk by bashful Jack Tucek.” For November 16 – “Unflinching Lynch and Tucek defeat Hackensack 20-0.” At Washington and Lee University, he was on the freshman football team in 1941. He also played third base on his high school and university teams. He attended the Naval Academy for a short time in the fall of 1942.

His only survivor was his widowed mother Rose June Tucek. She was a stenographer in an insurance company, and after his death, she signed up for the Women’s Army Corp on January 27, 1944. She went to San Juan Puerto Rico in December 1951. She retired to Florida, and in 1952 established the Jack Tucek Award for the outstanding Rutherford High School football player. At the 4th annual dinner in 1955, Felix “Doc” Blanchard, fullback from the 1945 West Point “team of the century,” was in attendance. She died in 1960 and was buried in the Long Island National Cemetery.

Some additional information is from Kings Pointers in World War II:

John P. Tucek signed on aboard the SS James Sprunt as Deck Cadet on February 23, 1943 at Charleston, South Carolina. He was joined by his Academy classmates Cadet-Midshipmen Michael Buck (Engine), Howard McGrath (Engine) and James Rowley (Deck). The ship loaded at Charleston for a voyage to Karachi, India via Texas and the Panama Canal with general cargo and 4,000 tons of high explosives.

On the morning of March 10, 1943 the James Sprunt was traveling in convoy KG-123 about three miles southeast of Guantanamo Bay, Cuba. Another ship in the convoy, the Virginia Sinclair, had been torpedoed at 0430 on the same morning. At 0809 U-185 fired torpedoes at the convoy, hitting the James Sprunt.

At 0810 the SS James Sprunt’s cargo of explosives blew up with extraordinary force, disintegrating completely. The glare from the explosion was seen more than forty miles away, and witnesses on other ships recalled the violent tremors, and debris that fell like hail on the other ships. There were no survivors among the 43 crew members and 28 Naval Armed Guard members including all four Kings Point Cadet Midshipmen; Michael Buck, Howard McGrath, James Rowley, and John Tucek.

The thirty day life of the SS James Sprunt may have been the shortest life span of any Liberty ship. The ship was delivered from North Carolina Shipbuilding to the War Shipping Administration on February 13, 1943, loaded cargo from the 19th to the 29th and was destroyed on March 10, 1943.

Cadet-Midshipman John P. Tucek was posthumously awarded the Mariners Medal, Combat Bar, Atlantic War Zone Bar, Victory Medal and Presidential Testimonial Letter. John Paul Tucek, Jr. was the son of John Paul Tucek, Sr. and Rose June Tucek. He graduated from high school in Rutherford, New Jersey in 1941 where he was the Captain and star of his high school football team during his senior year. A passenger list on file in New York indicates that John and his mother took a trip to Curacao in 1934 aboard SS Astrea, so he was no stranger to the sea. John attended Washington and Lee University after graduation. After one year there, he decided to apply for admission to Kings Point in June 1942 and reported for his initial training in October 1942.

Both accounts above contain information from The Herald News on March 26, 1943.

John's father died by suicide just before Christmas in 1938; he was despondent over ill health.

The wartime course for the Merchant Marine Academy was notionally "8 weeks of basic training, at least 6 months sea duty on a merchant ship, and 9 months of advanced training at the United States Merchant Marine Academy at Kings Point, NY." Given John's timeline — he signed up on January 15 and was aboard a ship on February 23 — this training pipeline doesn't seem to have been closely followed.

The United States Merchant Marine Academy gives his name as "John Paul Tucek, Jr.;" it appears in all other contemporary reporting as "John Connell Tucek," "J.C. Tucek," or, once in 1936 on the passenger manifest of SS Black Tern, as "John P. Connell Tucek." Connell was his mother's maiden name.

John is not listed with his classmates, nor on the killed in action panel in Memorial Hall. This omission was discovered by researcher Kathy Franz.

John is one of 36 members of the Class of 1946 on Virtual Memorial Hall.

The "category" links below lead to lists of related Honorees; use them to explore further the service and sacrifice of the alumni in Memorial Hall.
Retrieved from "http://usnamemorialhall.org/index.php?title=JOHN_C._TUCEK,_DECK_CADET,_USMS&oldid=123256"
Categories:
Hidden categories: