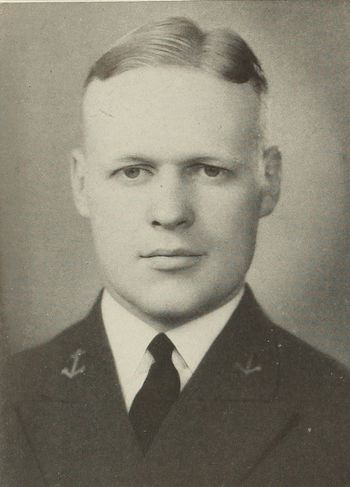 John was lost when USS Bismarck Sea (CVE 95) was sunk by two kamikazes on February 21, 1945 while supporting the invasion of Iwo Jima. He was the ship's executive officer.

The 30-year-old air command officer transferred to the Naval Air Corps in August, 1941, after serving three and a half years on the USS Tennessee. Completing training as a fighter pilot at Opa-locka, he was assigned to the Enterprise.

Before the Enterprise came home, Comdr. Mehlig shared a group Presidential citation for meritorious service. He was attached to the naval air station at Pearl Harbor before returning to this country early in 1944 for a leave and assignment to the Bismarck Sea.

As a boy in Washington, Comdr. Mehlig wanted to attend the United States Naval Academy at Annapolis, and entered Severn school, Maryland, with that in mind. Later, through the interest of Frank B. Shutts, Miami, he was appointed to Annapolis by Sen. Park Trammell.

A tribute to his ability as a fighter pilot was contained in a letter by an admiral to Mrs. Jay last Christmas. In it he said, "I want to tell you with utmost sincerity that John is a grand lad and is doing a wonderful job. Everyone who comes in contact with him says the same thing."

John attended John Eaton school and then Western High School in 1931. He was a Boy Scout and Eagle Scout with Troop 44 in Kokomo. At Severn school, he was voted the boy who contributed most to the school in leadership athletics and scholarships. He was a star lacrosse player at Annapolis.

Father Raymond Louis Mehlig was the president of the South Side Lumber and coal company in Kokomo, Indiana. His mother May was Mrs. Webb Jay.

From Severn School 1933 yearbook: “Whitey” You’ve guessed it the “Whitey” Mehlig who spends his Christmas leaves down in Miami. One of our finest athletes, Johnny captured a place on the All-Maryland football team of 1932, is showing up just as well on the mat, and is an expert when it comes to handling a lacrosse stick.

There is an old saying that ladies as well as gentlemen prefer blondes, but Whitey starts a new one – that all blondes don’t go for the ladies. Quiet, unassuming, well liked by all, Whitey goes through his classes leaving a long string of 4.0’s behind him. A member of Sigma Phi Sigma. Good luck, Whitey, and best wishes for the future.

He does not have anyone listed as next of kin, but he was survived by his parents (mother remarried), grandparents, and uncles who are retired USN.

The Miami News reported on December 31, 1946 that John's mother was presented his posthumous Bronze Star in a ceremony at the Miami naval air station.

John is one of 45 members of the Class of 1937 on Virtual Memorial Hall.

Retrieved from "http://usnamemorialhall.org/index.php?title=JOHN_L._MEHLIG,_LCDR,_USN&oldid=138136"
Categories:
This page was last modified at 13:33 on 22 April 2021.
About USNA Virtual Memorial Hall