Hugh Wilson McKee was admitted to the Naval Academy from Kentucky on September 25, 1861 at age 17 years 5 months. 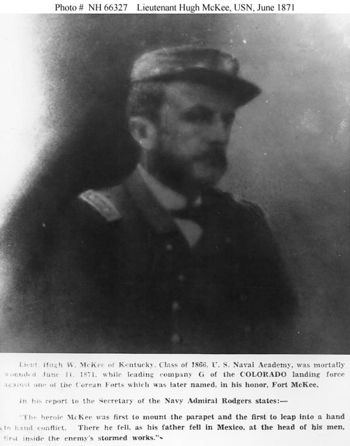 McKee was born in Lexington, Kentucky to a military family. His father, William R. McKee, was a US Army colonel who had been killed in action commanding the Second Kentucky Regiment in the Battle of Buena Vista during the Mexican–American War.

Hugh McKee was appointed to the Naval Academy 25 September 1861 and graduated in 1866. His early duty stations included service in the Practice Squadron and aboard the USS Rhode Island, flagship of the North Atlantic Squadron. In 1867-1869, he was assigned to the steam frigate Franklin and steam sloop of war Ticonderoga, both operating in European waters. McKee was promoted to ensign in March 1868.

McKee had attained the rank of lieutenant by March 1870, and was serving in the Asiatic Squadron as an officer of the USS Colorado. He was mortally wounded 11 June 1871, while leading a company of bluejackets over the walls of a Korean fort on Ganghwa Island close by the Inchon beaches during the United States expedition to Korea. Fifteen sailors and Marines received the Medal of Honor for their actions during the battle including William F. Lukes, Alexander McKenzie, Samuel F. Rogers, and William Troy, who attempted to save McKee, as well as Frederick Franklin, who assumed command of McKee's company until relieved.

McKee died on board the USS Monocacy at 5:45 p.m. that afternoon and his body was sent to his ship, the Colorado, the next day. His remains were later sent to Shanghai and from there to the United States. He was interred at Lexington Cemetery. He never married and had no descendants.

Hugh is buried in Kentucky.

He is listed on the killed in action panel in the front of Memorial Hall under the heading "Korea Expedition 1871."

Hugh Wilson McKee was born, April 23, 1844, at Lexington, Kentucky, the son of Colonel William R. McKee, who fell at Buena Vista while leading his regiment (the Second Kentucky) in the memorable charge under Colonel May.

McKee exhibited, early in his professional life, traits of personal bearing and of character which made him a favorite among men and indicated success and distinction in his career. He was above medium height, straight and compact in figure, of noble and pleasing countenance. His duties were discharged with superior intelligence and sound judgment, with promptitude and exactness, with self-possession and decision. He had in a high degree the quality of command which inspires men with confidence in their leader. But he was even more happy in the relation of friend and comrade. No man in the Navy attracted a larger share of the affection of those with whom he served. His character as an officer commanded the respect of all, and his genial and generous spirit left none untouched who came within the charm of his presence. His death brought to his comrades life-long grief and regret, and by it the Navy and the country lost the bright promise of a useful life.

In the assault upon the principal Corean fort McKee showed an intrepid spirit. The assaulting force, of which he commanded a company, was formed about 150 yards distant from the fort, under shelter of the Monocacy’s fire. The citadel about to be assaulted, the key to the defenses upon the point below, was built upon the apex of a conical hill, about 150 feet from the bottom of the ravine through which our men had to pass in order to reach it. While waiting, McKee kept, with sword drawn, in advance of his company line. An officer remonstrated with him and begged him to go in with his company and not ahead of it. McKee replied, “I will be the first man in that fort!” The order to charge was given, and our men rushed down the slope and up the opposite hill. McKee leaped into the fort and received in his body the first fire of the enemy. The officer who had so kindly urged him to take the chances with his men followed him closely and found McKee, already pierced by the charge of a jingal, struggling forward and fighting desperately, sword in hand. The blood of the son, like that of the sire, was poured for his country upon a foreign soil.

His brother officers of the Asiatic Squadron placed in the chapel of the Naval Academy a tablet which records his heroic death. The mortal remains of McKee rest in his native State. P. F. HARRINGTON 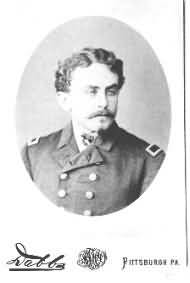 Three ships were named in honor of Hugh:

Hugh is one of 5 members of the Class of 1866 on Virtual Memorial Hall.

The "category" links below lead to lists of related Honorees; use them to explore further the service and sacrifice of the alumni in Memorial Hall.
Retrieved from "http://usnamemorialhall.org/index.php?title=HUGH_W._MCKEE,_LT,_USN&oldid=120114"
Categories: