George Washington De Long was admitted to the Naval Academy from New York on October 1, 1861 at age 17 years 1 months. 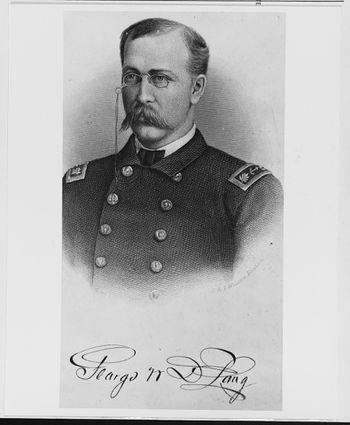 "Engraved portrait, with a facsimile of his signature, taken from The Voyage of the Jeannette ..., Volume I, frontispiece, edited by Emma DeLong, published in 1884. He commanded the Jeannette Arctic exploring expedition, 1879-1881. U.S. Naval History and Heritage Command Photograph."

George Washington DeLong was born in New York City on 22 August 1844. He graduated from the U.S. Naval Academy in 1865 and was assigned to the steam sloop Canandaigua. Subsequently promoted to the ranks of Ensign, Master and Lieutenant, he was an officer in USS Juniata during her 1873 voyage to Greenland in search of the missing exploration ship Polaris. Lieutenant DeLong later served as Executive Officer of the training ship Saint Mary's. His experiences on the Juniata convinced Lieutenant DeLong of the value of Arctic exploration, and he joined New York newspaper publisher James Gordon Bennett in planning an attempt to reach the North Pole in a ship specially strengthened to drift in the Arctic icepack.

Bennett purchased the British steam bark Pandora in 1878, renamed her Jeannette and turned her over to the U.S. Navy under the terms of a Congressional authorization to operate the ship, with Bennett bearing the costs. DeLong, who was to command the planned expedition, brought Jeannette from Europe to San Francisco, California, where she was refitted for ice navigation. In July 1879 he sailed for the Bering Strait, accompanied a crew of Navy officers and enlisted men plus a few civilian specialists. Jeannette entered the ice in early September and remained in its grip until June 1881, when she was broken open by its force and sank.

Lieutenant Commander DeLong then led his men on a heroic journey, of nearly three months duration, across the rugged ice to open water north of Siberia. There they launched the three boats that they had dragged along during their travels over the ice. One of the boats disappeared in a storm a few days later, its eight occupants becoming the expedition's first fatalities. The other two craft, including that commanded by DeLong, reached the Lena River Delta, where they landed at widely separated points. DeLong and his thirteen companions, suffering badly from frostbite, exhaustion and hunger, struggled southwards in an effort to find inhabitants. However, with exception of two men sent ahead to seek rescue, all died during October or the first few days of November 1881. The bodies of Lieutenant Commander George W. DeLong and nine of his men were discovered in March 1882 and, in early 1884, brought back to the United States for reburial.

Arctic exploration has claimed its victims in the navy as well as in civil life and the army. The deaths of Lieutenant Commander G.W. De Long and Lieutenant C.W. Chipp during the ill-fated Jeannette expedition of 1881, caused a profound sensation throughout the world, their tragic ends in the bleak Lena Delta region of Northern Siberia appealing strongly and deeply to the popular imagination.

George was survived by his wife and daughter. He has a memory marker in New York. 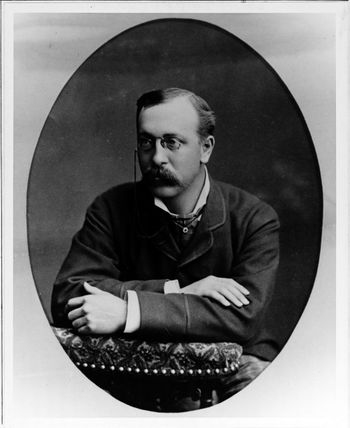 "Photograph taken just before he left the United States for the Arctic in 1879. He commanded the 1879-1881 Jeannette Arctic exploring expedition. The original print was given to Charles Mitchell and Ruth Simpson Thomas. Courtesy of the Naval Historical Foundation. Collection of Admiral Harry E. Yarnell, USN, donated by Miss Ruth Thomas. U.S. Naval History and Heritage Command Photograph."

The De Long Mountains in Alaska are named for him, as are the De Long Islands in the East Siberian Sea.

Others at this command: LCDR Cornelius Schoonmaker '59 and LT Sydney Simons '67.

Others at this command: LT Charles Chipp '68.

George is one of 4 members of the Class of 1865 on Virtual Memorial Hall.