Henry E. Nichols was admitted to the Naval Academy from New York on October 1, 1861. Henry graduated #29 in his class of 54 midshipmen.

USS Monadnock (BM 3) He is buried in California. 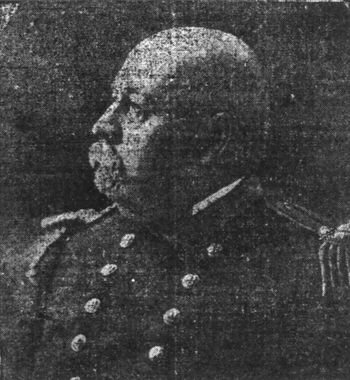 The monitor Monadnock and the gunboat Helena shelled Parañaque and Las Piñas all day. For the former vessel this was the culmination of an experience which had been protracted through two months, during all of which time she had been lying off Parañaque under fire. Captain Henry Ezra Nichols, of the Monadnock, was overcome by the heat at noon, and retired to his cabin, where he received reports of the operations and the advance of the Americans, who were closing in upon the towns. He continued to give directions until he lost consciousness. At five o’clock in the afternoon he died.

Lt. Cmdr. Henty E. Nichols arrived in Sitka on the mail steamer on Sept. 14, 1884, and took command of the USS Pinta the same day. He was not a stranger to Alaskan waters; from 1881 through 1883 he had commanded the Coast & Geodetic Survey steamer Hassler which made surveys in southern’ Southeastern Alaska during all three summer seasons.

Henry Ezra Nichola was born in New York State and entered the U.S. Naval Academy in 1861. He graduated in 1865, while the Civil War was still being fought, and was assigned to the Swarta in the West Indies. In subsequent years he served in several areas in various ships, but most of bis work was with the Coast Survey on both coasts,

Nichols remained in command of the Pinta until November 1887, and subsequently served as a shipyard inspector, on recruiting duty, and as a lighthouse ibspector and as an inspector of supplies.

In 1897, with the rank of captain, he took command of the cruiser Bennington which joined Admiral Dewey's fleet In Asiatic waters. In 1899 he transferred to the monitor Monadnock and engaged in the capture of Pananaque in the Philippines. During the bombardment he was overcome by heat and died on June 10, 1899, while his ship was still in action..

Nichols Passage near Ketchikan, Nichols Bay on Prince of Wales Island and Nichols Islands in Tlevak Strait were all named for him.

Henry's funeral procession, in March 1900, was large and included the Mayor of Oakland and several city council members. It was reported on page 1 of the Oakland Tribune.

From a biography of his wife:

She was thirty when she married 45-year-old CDR Henry Nichols on November 1, 1888. Although her family was prominent in the Oakland, Califor- nia area, and Nichols was a dis- tinguished naval officer, there was no mention of the wedding in the press. County records state that H. D. Lathrop married them.

Juliet's husband was highly praised for his work with the U.S. Coast and Geodetic Survey from 1880 to 1891. During the last three years of his tour of duty, they were separated each summer while he worked charting the waters of South- East Alaska. At the end of this assignment he became District In- spector of the lighthouses of California's coast.

In 1898 Juliet was again alone, but this time it was to be permanent. Nichols, who earlier had been pro- moted to Captain, joined Admiral Dewey's fleet at Manila. Six months later he was given command of the turret monitor Monadnock. This ves- sel, under his direction, gave a good account of herself, shelling the enemy fortifications in cooperation with the Army ashore.

Captain Nichols suffered from the intense heat but refused to leave the deck, a fatal decision since he was overcome by the weather and died a few hours later.

Juliet Fish was born in 1859, but her mother died young. She was raised by her aunt, Emily Fish, the longtime female keeper at Point Pinos Light Station on the central California coast. Juliet went on to marry Navy Lt. Cdr. Henry E. Nichols, a lighthouse inspector. He was sent to the Philippines in 1898, during the Spanish-American War, and died there. As the wife of a former Lighthouse Service officer, Juliet was offered the keeper’s post at the Angel Island Light, San Francisco Bay, in 1902.

In that capacity she tended a fog bell and an uncovered fifth-order lens with a fixed red light, which was moved by pulley out of the bell house each evening and retumed each moming. Because of the growing number of vessels traversing the bay, a fog bell had been established at Point Knox, on the west side of the island, in 1886. The light had been added fourteen years later. A one-story keeper’s dwelling was built adjacent to the bell house. The station was accessed by a long wooden stairway down the face of a steep cliff facing the bay.

On the morning of 18 April 1906, Juliet Nichols was making a final check of her equipment when she heard a rumbling sound. She looked across the water toward San Francisco and was astonished to see buildings collapsing and fires breaking out. Juliet was experiencing firsthand one of the world’s most devastating earthquakes. Her own building then began to shake and sway, while tinkling sounds of breaking glass came down from the tower. The shaking bent a connecting tube in the lantern and jarred the damper so that the flame burned much higher than it should. She fought to adjust it as the tremors continued.

When the earthquake finally ended, Juliet surveyed the damage. It was so great that it would become necessary to tear down and rebuild the tower with reinforced concrete. The earthquake had damaged every community within 100 miles of San Francisco.

Fog signals broke down frequently. The mechanical pounding of the bell produced strong vibrations, which caused the tension bars and hammer springs to break. Less than three months after the earthquake, on 2 July 1906, Angel Island’s new signal, less than a year old, again broke down while Juliet was watching the fog roll in through the Golden Gate, as it does each evening. She heard the foghorns start up at lighthouses on both sides of the channel and rushed to start her own equipment, only to have the machinery cough into silence a few minutes later. She could see the tips of the mast of a sailing vessel approaching through the fog. With no time for repairs, Juliet grabbed a hammer and began pounding the bell, once every fifteen seconds, warming the ship away from her island. Twenty-four deafening hours later, the fog lifted and Juliet could rest.

But the Angel Island machinery failed again two days later, forcing Juliet to repeat her exhausting ordeal. When the weather cleared she summoned the lighthouse engineer to make repairs. Juliet Nichols received a letter of commendation from the Lighthouse Board for her dedication to duty.

Her entire career at Angel Island was a battle with fog; her log recorded periods as long as eighty hours at a time. During many of these she had to strike the bell by hand. Angel Island was one of the worst hazards in San Francisco Bay, and Juliet took her duties very seriously. Her devotion to duty is an example to all those who serve in the Coast Guard, She retired in 1914 and lived privately in the hills of Oakland, California, until her death in 1947. She is buried at Mountain View Cemetery, Oakland. A building is named in her honor at the Coast Guard Training Center, Petaluma, California.

Commander, Board of Inspection and Survey, San Francisco

Henry is not included in Memorial Hall with his classmates. This omission was discovered by researcher Kathy Franz.

Henry is one of 4 members of the Class of 1865 on Virtual Memorial Hall.

The "category" links below lead to lists of related Honorees; use them to explore further the service and sacrifice of the alumni in Memorial Hall.
Retrieved from "http://usnamemorialhall.org/index.php?title=HENRY_E._NICHOLS,_CAPT,_USN&oldid=116229"
Categories:
Hidden category: