Cornelius Marius Schoonmaker was admitted to the Naval Academy from New York on September 28, 1854 at age 15 years 7 months. 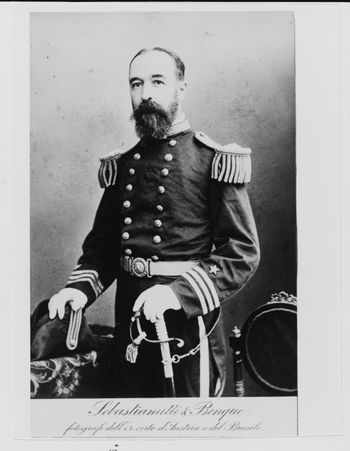 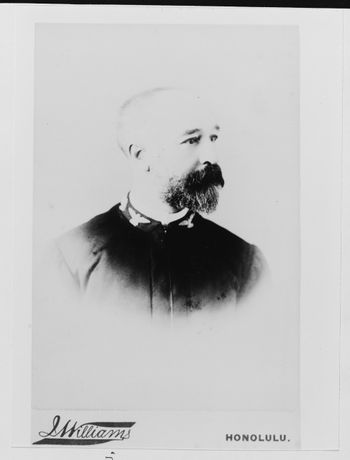 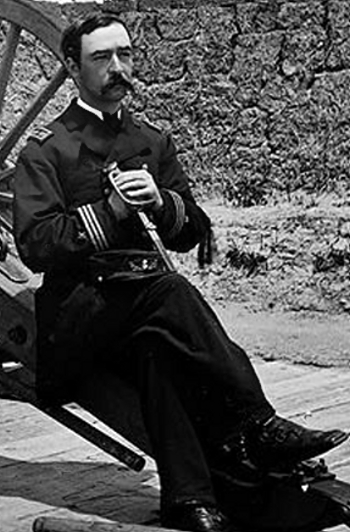 Cornelius Marius Schoonmaker was born on 2 February 1839. He was appointed to the U.S. Naval Academy in September 1854 and, following graduation in June 1859, served for about two years off the African west coast. In May-September 1861, during the first several months of the Civil War, he was a junior officer on the steam frigate Minnesota and participated with her in the capture of Forts Hatteras and Clark. From late 1861 until after the end of the Civil War in 1865, Lieutenant Schoonmaker was Executive Officer of several ships, including the gunboats Wyandotte and Octorara, monitors Manhattan and Catskill, and the cruiser Augusta. While in the Manhattan, he took part in the Battle of Mobile Bay in August 1864 and in the subsequent campaign to capture Fort Morgan.

In June 1865, Lieutenant Schoonmaker became Navigator of the sloop Juniata and, after promotion to Lieutenant Commander, was her Executive Officer. In 1867-70, he served as Navigator of the Asiatic Squadron flagship, USS Piscataqua (renamed Delaware in 1869). He received instruction in the emerging field of "torpedo" warfare in 1872, then was given command of the dispatch vessel Frolic. Commander Schoonmaker served at the New York Navy Yard in 1873-74, and was Inspector of the Eighth Light-House District, at New Orleans, until 1878. He took command of the new gunboat Nipsic in 1879, taking her to European waters in 1880-81.

Schoonmaker was stationed at the Norfolk Navy Yard in 1882-85 and received promotion to the rank of Captain in October 1886. He became Commanding Officer of the steam sloop Vandalia, on the Pacific Station, in 1888. Captain Schoonmaker was among the many members of her company who lost their lives when Vandalia was sunk in the very destructive Apia, Samoa, hurricane of 15-16 March 1889.

Schoonmaker was the soul of honor. He was incapable of a mean action; a Christian at heart as well as outward appearance; a consistent member of the Episcopal Church, who strove to do his duty to his God as well as to his fellow-men. There was something so sincere, so kind-hearted and so good about him that all loved him. His was the role of peacemaker, a good messmate and intelligent companion. He was a thinking man, read largely not only upon all professional subjects, but the higher class of general literature. In war he was always at the fore. As executive officer of the monitor Manhattan, in the battle of Mobile Bay, he won great praise.

Socially he was charming. He was a gentleman in the highest sense of the word, sans peur et sans reproche.

We entered the Navy about the same time. Our first cruise together on the coast of Africa. After that we met from time to time, renewing our never-dying friendship. He was of an affectionate disposition, fond of his family and home. A few days before his tragic end in that far-away port, thousands of miles from our homes, we talked about our wives and families. He, poor fellow, spoke so feelingly of his, as if, it afterwards seemed to me, he felt he might not see them again.

In the course of his duty he was in command of the U. S. S. Vandalia, in the port of Apia, Samoan islands, on March 16, 1889, that memorable hurricane in which his life was given to his country.

While it was well known that the port of Apia was most dangerous during this season of the year, yet to be there was to be at the post of duty; the risk was great, but the honor of our country was at stake, and what sacrifice could be too great to maintain that?

Frequently the Navy is not only called upon to encounter the great perils of the deep and of war, but also to face the dangers of death from yellow fever and other diseases. It does it cheerfully, that our glorious flag may wave triumphantly over land and sea, that our people may pursue their avocations with safety to life and property.

He had been at his post on deck for many hours; several times the waves had swept the decks and dashed him against the guns. He had been almost carried overboard several times, when finally a wave of tremendous height swept over the Vandalia's deck, carrying death and destruction before it. It was then that gallant Schoonmaker, bleeding and faint from previous wounds, was washed overboard and drowned.

The sea over which for many years he had ploughed his way became at last his grave.

Death has taken from us a noble man, but has left his bright example for us to cherish. N. H. FARQUHAR, '55.

Lieutenant Commander, Piscataqua
Others at this command:
MIDN Charles Brown '67

Lieutenant Commander, Piscataqua
Others at this command:
ENS Charles Brown '67

Lieutenant Commander, Delaware
Others at this command:
Master Alfred Forée '67

Cornelius is one of 5 members of the Class of 1859 on Virtual Memorial Hall.

Retrieved from "http://usnamemorialhall.org/index.php?title=CORNELIUS_M._SCHOONMAKER,_CAPT,_USN&oldid=128513"
Categories:
This page was last modified at 13:31 on 8 September 2020.
About USNA Virtual Memorial Hall