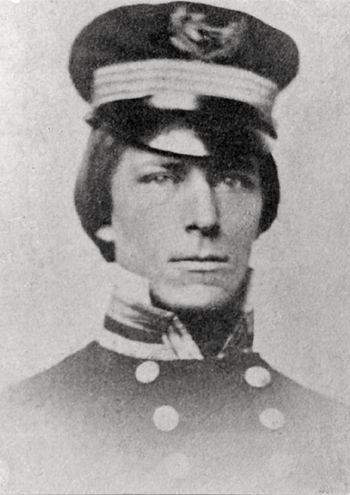 Born at Annapolis, Maryland, Flusser entered the United States Naval Academy in 1847 and graduated with the Class of 1853 with the rank of passed midshipman. He received promotion to master and then lieutenant on September 15 and 16, 1855, while serving in the South American Squadron. In early 1861, Flusser was appointed to the Naval Academy in Annapolis, and oversaw its relocation to Fort Adams in Newport, Rhode Island.

Flusser served on blockade duty off the coast of Georgia in late 1861, before being appointed commander of the gunboat Commodore Perry for the Burnside Expedition, taking part in the victory at the Battle of Elizabeth City in February 1862.

Flusser was promoted to lieutenant commander in July 1862, also assuming command of all Union gunboats in Albemarle Sound. He took part in the expedition against Franklin, Virginia, in October 1862, with his ship only narrowly escaping capture.

Flusser was killed in action on April 19, 1864, during the Battle of Plymouth, in the engagement between the Miami and Southfield against the Confederate ironclad CSS Albemarle. In that action, Flusser personally fired a cannon shell at the Confederate ironclad. The shell, with a 10-second fuse, bounced off the Albemarle's armor and landed back on the deck of the Miami, where its explosion killed him. Brigadier General Henry Walton Wessels, commanding U.S. Army troops at Plymouth, North Carolina, noted: "In the death of this accomplished sailor the Navy has lost one of its brightest ornaments..."

Flusser was interred at the military cemetery in New Bern, but in 1868 his remains were transferred to the Naval Academy Cemetery.

Charles was survived by his wife, Juliana, whom he married on November 24, 1827. He is buried in the Naval Academy Cemetery. 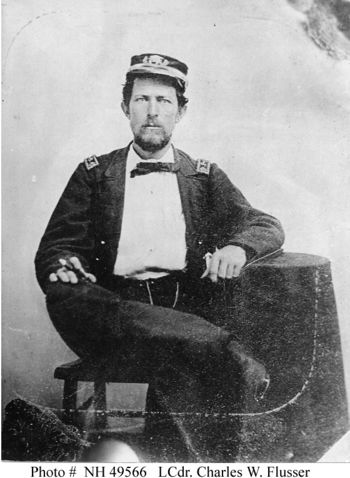 "Copy from a tintype taken at Plymouth, North Carolina, in 1864."

Several ships have been named for William:

He is used as an example of how to search for information of Civil War-era veterans by the National Archives of the United States.

Charles is one of 9 members of the Class of 1853 on Virtual Memorial Hall.

The "category" links below lead to lists of related Honorees; use them to explore further the service and sacrifice of the alumni in Memorial Hall.
Retrieved from "http://usnamemorialhall.org/index.php?title=CHARLES_W._FLUSSER,_LCDR,_USN&oldid=115661"
Categories: