Alexander Slidell MacKenzie was admitted to the Naval Academy from New Jersey on September 28, 1855 at age 13 years 9 months. 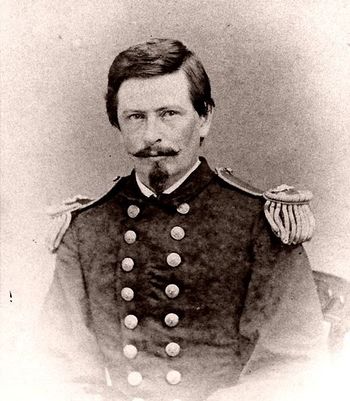 Alexander Slidell MacKenzie was born in New York on 24 January 1842, the son of a Navy Commander of the same name. Appointed to the U.S. Naval Academy in 1855, he graduated in June 1859 and was assigned to the newly-completed steam sloop of war Hartford. During the next two years, Midshipman MacKenzie served in that ship with the East India Squadron. Promoted to Lieutenant in August 1861, he was an officer of the gunboat Kineo during the conquest of the lower Mississippi River in 1862. Later transferred to the South Atlantic Blockading Squadron, MacKenzie served off Charleston, South Carolina, in the steam frigate Wabash and monitor Patapsco, taking part in combat operations against Fort Sumter and Morris Island. Later in the Civil War he commanded the gunboat Winona, also in the waters off South Carolina. In July 1865 MacKenzie received the rank of Lieutenant Commander and soon began a second Far Eastern deployment in USS Hartford. He was killed in action on 13 June 1867, during a punitive expedition ashore in southern Formosa.

He is listed on the killed in action panel in the front of Memorial Hall under the heading "Formosa Expedition 1867."

From the August 1962 issue of Shipmate; the article is a much longer one on Alexander's father:

Alexander Slidell Mackenzie, Jr. graduated from the Naval Academy in 1859 (graduate no. 370) in the same class as Mahan. His first cruise was in the Hartford, flagship of the East Indian Squadron. In the papers of S.F. DuPont in the Eleutherian Mills Historical Library, Wilmington, Delaware, there is a letter from his widowed mother asking her friend. Captain Du Pont, for the itinerary of the Hartford ordered home in 1861. She wanted to get letters to her son to counteract the secession sentiment she feared was rampant in the wardroom and steerage of the ship. Her fears were unfounded. The Hartford and Mackenzie arrived home in time to take part in the battle of New Orleans. He was in the ironclad New Ironsides in the attack on Fort Sumter, 7 April 1863. He did a tour as instructor in seamanship at the Naval Academy in Newport and then became executive of the Hartford. He was killed in action 13 June 1867 on the island of Taiwan while in command of a force that had gone ashore to punish savages for the murder of members of the crew of an American whaling ship. The tribute he received from his commander, Rear Admiral H. H. Bell, was perhaps even great than that given his brother. "The Navy could boast no braver spirit, no man of higher promise."

Alexander is one of 5 members of the Class of 1859 on Virtual Memorial Hall.

The "category" links below lead to lists of related Honorees; use them to explore further the service and sacrifice of the alumni in Memorial Hall.
Retrieved from "http://usnamemorialhall.org/index.php?title=ALEXANDER_S._MACKENZIE,_LCDR,_USN&oldid=115647"
Categories: