George Parker Ryan was admitted to the Naval Academy from Massachusetts on September 30, 1857 at age 15 years 4 months. 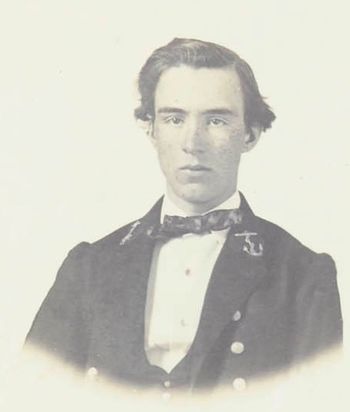 George was lost on November 24, 1877 when USS Huron (1875) went aground and then wrecked in heavy weather off Nags Head, North Carolina. Ninety-seven other officers and men were also lost. He was the commanding officer.

George P. Ryan was appointed an Acting Midshipman at the Naval Academy, September 30, 1857, and graduated and was warranted as Midshipman from the 1st of June, 1861.

June 27, 1876, ordered to duty connected with the Centennial Exposition; July 8, 1876, detached and placed on waiting orders.

George Parker Ryan was born in Boston, May 8,. 1842, in the Stackpole House, corner of Milk and Devonshire streets, where the post office building now stands.

His father was James Walker Ryan, one of the best known and most popular hotel-keepers of his day. George was educated in the public schools of his native city, and received a Franklin medal at the Bremmer School in 1856. After a year at the English High School, where he was distinguished as a declaimer, he entered the Naval Academy in September, 1857. His gracious manners and manly bearing made him a favorite among his classmates. He graduated with distinction at the outbreak of the war in 1861.

Commander Ryan assumed command of the U. S. S. Huron, an iron steamer of 1000 tons, in September, 1876. That season was passed in surveying in the Caribbean Sea. During the summer of 1877 the vessel was repaired in New York and fitted for another season of difficult work among the islands of the same sea, much of it being original surveys.

Ryan was a careful and expert navigator; his previous experience and successful work among these islands had given him confidence in his ability to take his ship wherever he desired. The writer met him in New York while the Huron was under repair in 1877, and he was completely absorbed by the work upon which he was engaged. He had many incidents to relate of the inaccuracies of the charts of that locality, and of the entire absence of surveys in many cases. It had the novelty and interest of discovery.

The Huron sailed from New York in November and touched at Hampton Roads for a draughtsman, and sailed thence for the south at 10 o’clock in the morning on the 23d of the month. She struck on the coast of North Carolina, near Nag’s Head, at two o’clock the following morning, while steering a course S by E 3/4 E from the Capes of Virginia.

It is not the intention to review the incidents of this disaster, but to say a word in vindication of the professional ability and judgment of a classmate and friend; his gallantry and honor need no defenders.

The Huron was an iron ship. The necessary observations had been made by Professor B. F. Greene, U. S. Navy, at Hampton Roads, in February, 1876, to determine the horizontal and vertical force of magnetism on board the ship. At the same time the local deviations of the compasses were determined, with the ship on an even keel. Unfortunately, Professor Greene had told Ryan that the calculations based upon the observations for horizontal and vertical force gave an inappreciable heeling error. Ryan had frequently caused the deviations of the ship’s compasses to be determined; the last time being just before sailing from New York. It was not, however, until she sailed for the last time from Hampton Roads that all the conditions conspired to make the heeling error of the compasses a maximum error. The ship was steering a course to the southward from the capes, upon which the error produced by heeling was the greatest possible. The wind was to the eastward and blowing strong, as is shown by the testimony of all the survivors, and the fact that the jib-stay was carried away during the night. The ship was under all fore-and-aft sail at the start, gradually reduced as the wind increased. The ship was, therefore, heeling well over during the whole run from the capes to the point where she struck. The error produced by heeling tended to take the ship on shore.

Before the distinguished court which inquired into this sad disaster, Professor Greene stated that the error for a heel of 10° would have been, at the time of his observation, 4.2° from the magnetic meridian. The direction of the magnetic meridian in this locality corresponds very nearly to the course the Huron was steering. A subsequent analysis of the observation made by Professor Greene showed that instead of 4.2°, the error was nearly double this amount. In other words, the ship was steering on shore 1/2 of a point or more about which the officers knew nothing, assuming the ship heeled 10°. Can it for a moment be supposed that so careful an officer as Ryan would have steered the course he did, had he not been assured that the heeling error was inappreciable? Had he been informed that it was even 4°, he certainly would have made the proper allowance for it, in laying the course.

While the conditions of sea and current combined to produce the result, yet I am confident that it required the addition of this unknown compass error to wreck the ship. Through some error in preparing the report of the court of inquiry, it states that Ryan was furnished with a tabular statement of these heeling errors. This error in the report was probably due to misappreciation of the meaning of these terms, on the part of the judge-advocate of the court—terms little used at that time in our service, as we had but recently constructed iron ships, which made the use of the terms necessary.

The report is in this respect, however, plainly at variance with the evidence of Professor Greene, the only witness upon the subject. W. T. Sampson, ’57-61.

Commander Ryan was an Irish-American, born in Boston May 8, 1842. He was a son of Mr. James W. Ryan, and brother of Mr. John W. Ryan, editor of the Boston Courier, and of William Ryan, Esq. Some ten years ago, Commander Ryan married a daughter of John Galvin, Esq., the City Forester of Boston, and he leaves a family of four children, the eldest but eight years old. Captain Ralph Chandler, U.S.N., in a letter to the Boston "Pilot," says of him: He was born in Boston, received an appointment as midshipman, through the influence of Hon. Anson Burlingame, in 1857, and soon took a prominent position in the advanced class at the Naval Academy. He was only a few months past the age of sixteen when he entered, but with ability beyond his years, and honest study, he graduated in three years, only one removed from the head of his class. In his academic course, he paid particular attention to practical and theoretical astronomy, and, on graduating, was assigned to duty as a navigating officer of the United States brig Bainbridge, an advancement seldom accorded to midshipmen even in time of war. He gained the full confidence of his commanding officer, and was promoted to a Lieutenant in 1862, and ordered to the steam corvette Sacramento. In 1865 he reported for duty as executive officer of the Lenapee, double-ender, then in the Cape Fear River, and was promoted to a Lieutenant-Commander in 1866, and assigned duty at the Naval Academy, as assistant professor of astronomy, and remained on that duty until 1859, when he was ordered to the frigate Sabine, as navigator and instructor to the graduating class of 1859. On the return of the Sabine, Ryan was ordered back to the Naval Academy in his old position of assistant in astronomy, and remained there until the work commenced of organizing the parties for the observation of the transit of Venus. His reputation as a mathematician and astronomer soon attracted the attention of the Navy Department, and Ryan was selected to take charge of one of the most important stations for the observation of the transit, that at the Desolation or Kerguelen Islands. He took passage in the Swatara for the field of labor in 1874. The thoroughness of the work of his party, and the accuracy and completeness of his observation of the transit will remain an indestructible monument to his ability, long after generations have passed away. He was promoted to a commander in October, 1874, and last fall ordered to the command of the Huron, an iron vessel of one thousand tons, displacement measurement. (He took command at Boston Sept. 4, 1876. —Ed. Journal.) His was a rare character—a noble disposition, and developed new traits of manliness and honesty of purpose with increased length of association. To strangers he was simply an intelligent, modest man. To those who knew him well he was true nobility, unmarred by one ungentle act or thought. A loving husband and affectionate father has disappeared from the family circle, and left a desolate hearthstone. The country and the Navy have lost one who bade fair to rise by honest merit to the topmost round, and his brother officers mourn for the bright light that has gone out with sincere and heartfelt grief.

Lieutenant Commander, Sabine
Others at this command:
MIDN Charles Brown '67

George is one of 3 members of the Class of 1861 on Virtual Memorial Hall.

Retrieved from "http://usnamemorialhall.org/index.php?title=GEORGE_P._RYAN,_CDR,_USN&oldid=136721"
Categories:
This page was last modified at 09:39 on 31 January 2021.
About USNA Virtual Memorial Hall