Edmund Underwood Loomis was admitted to the Naval Academy from Maryland on October 1, 1872 at age 21 years 3 months. 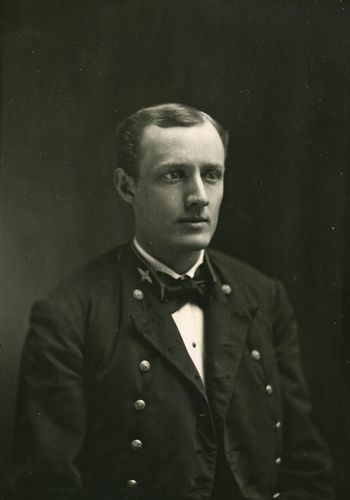 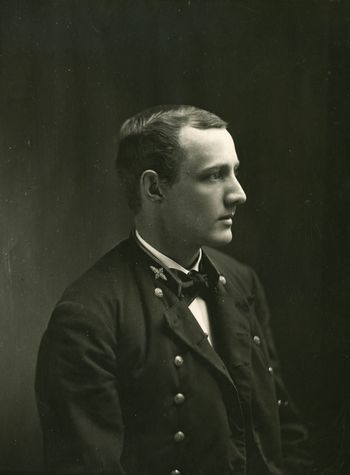 Edmund was lost on November 24, 1877 when USS Huron (1875) went aground and then wrecked in heavy weather off Nags Head, North Carolina. Ninety-seven other officers and men were also lost. He is buried in Pennsylvania.

Cadet Engineer Loomis was born in Pennsylvania, but entered the Naval Academy at Annapolis from the State of Maryland, Oct 1, 1872, and was graduated with his class June 21, 1875. He was in all respects a steady young man, standing well in his studies and duties, and winning the respect both of his classmates and superior officers. Loomis was over six feet in height, of large build, a fine, open countenance, blue eyes and light hair. He was about twenty-four years old.

From the Baltimore American.

Cambridge is one of the communities involved in sadness and gloom on account of the loss of the United States ship Huron. Among the officers of the ill-fated vessel doomed to death was Cadet Engineer Edmund U. Loomis, formerly of Carlisle, Penusylvania, but for some years a resident of this place. He was admitted to the Naval Academy in 1892 and graduated in 1875, and ever since has been in sea service, except a week or two now and then, when he was in port waiting orders. Handsome, gracious in manners, of a genial and bright disposition, kindly to his companions, reverent to those of greater age than his own, and truly chivalrous in his considerations for woman, he was highly regarded and universally beloved by all those who knew him. From the time the first despatch on Saturday evening announced the terrible disaster until Tuesday a profound and painful suspense was felt throughout the community, many hoping against hope, until the story of survivors removed all possibility of doubt. His body was found near the wreck on Wednesday, the 28th, and will be carried at once to Carlisle for burial.

Mr. Loomis, who was the youngest son of the late Dr. Isaiah Champlin Loomis, was nearly related to several persons who have made an heroic record in the history of the American navy. His grandmother Loomis was sister to Commodore Champlin and first cousin to the two Commodores Perry.

From the Cambridge News we take the following account of the manner in which Engineer Loomis met his death: "He was on duty in the engine room when the ship first struck, where he was at once joined by his associate engineers. There they remained at their posts, while the tumult of terror was going on above them, until orders were given to stop the machinery and extinguish the fires. The middle of the ship was now filled with water, and the quarter deck and forecastle were the only places where the officers and crew could find even a momentary safety. They divided, some taking one position and some the other, Mr. Loomis being among those who got in the forecastle. Here for hours he, with the others, were compelled to endure the icy and heavy seas that were constantly sweeping over the ill-fated vessel. Paralyzed by the cold and weakened by the rush of the waters, they lost the strength necessary to make exertions for safety, and could barely hold on to the wreck. At length he got jammed between some falling timbers, becoming severely hurt thereby in the chest and back. and soon after a tremendous sea washed him overboard. He caught a spar with his arm, and held on thereto for some ten minutes. If this had been carried at once from the ship, he undoubtedly would have been swept to the shore in the time that he maintained his hold, but it must bave been in some manner entangled, for it remained by the vessel’s side. Another spar was carried overboard, and this struck him on the arm, weakening his hold on the one to which he was clinging. He then turned over on his back, lifted his eyes and his joined hands towards Heaven and at once sunk beneath the raging waters.

The corpse of Mr. Loomis arrived in this p!ace on Tuesday evening of last week, and was taken to the residence of his grandmother, Mrs. C. Underwood of South Pitt street. The remains were encased in a metallic casket around which was placed the American flag. No person was permitted to see the corpse. Six of his fellow-members in the Theta Delta Chi Fraternity acted as pall bearers, and the Belles Lettres Society of Dickinsen College attended the funeral. The remains were interred in the family plot in the old graveyard. Peace to hit ashes.

Edmond appears with his family on the 1860 census in Carlisle, PA:

Edmund is one of 4 members of the Class of 1875 on Virtual Memorial Hall.