Lambert Gittings Palmer was admitted to the Naval Academy with an At Large appointment on July 20, 1863 at age 14 years 7 months. 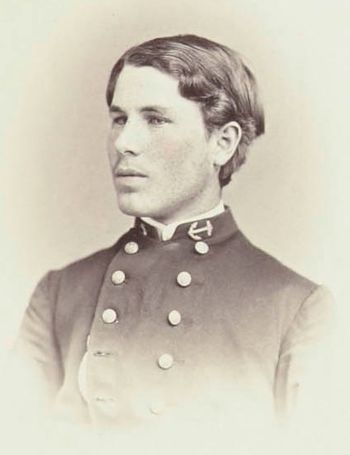 Lambert was lost on November 24, 1877 when USS Huron (1875) went aground and then wrecked in heavy weather off Nags Head, North Carolina. Ninety-seven other officers and men were also lost.

Lambert Gittings Palmer was born, October 12, 1848, in Baltimore Co., Md. His father, James C. Palmer, was a surgeon in the Navy, one of the most distinguished, accomplished, and highly educated officers of his corps, who at the time of his retirement was Surgeon General of the Navy. His mother was Miss Juliet Gittings, of Baltimore.

His sea duty as a Midshipman was on the South Atlantic Station, to which he was ordered in September, ‘1868, Arriving at Rio de Janeiro in October, he reported to Rear-Admiral Chas. H. Davis, and was assigned to the flagship Guerriére, in which he continued to serve until that vessel went out of commission in July, 1869.

In the Huron he served as Navigator until the night of November 24, 1877, when that ill-fated vessel was wrecked near Nag’s Head, coast of North Carolina, in a gale of wind.

When last seen alive, Palmer was standing at his station by the side of his commanding officer. The morning light discovered his dead body upon the sands of the North Carolina coast.

His widow survives him, but his two children are dead.

Palmer was a gentleman of the best school, and an officer of the finest sense of duty. He was gentle, amiable, and generous; cordial and affectionate to friends, uncompromising and unflinching to those whom he considered coarse and unworthy. In the last hours of his life, in a position of great peril, he displayed in an eminent degree the striking elements of his nature—courage, fidelity, and devotion to duty. R. P. Rodgers

Lieutenant Palmer, son of ex-Surgeon General Palmer, was born in Maryland in 1851. He was appointed to the Naval Academy by President Lincoln on July 20, 1863, graduating in 1868, and was promoted to lieutenant Nov. 10, 1872. He was married about two years and a half ago to Miss Ashurst, of Philadelphia and Newport, and leaves to children, who are with their mother in Washington. He was transferred from the Huron about ten days ago to the Swatara, but succeeded in having the order revoked, and returned to his ship to meet his death. He was a steady-going and reliable young man.

Lieut. Lambert G. Palmer
If it proves, as is sadly anticipated, that Lieut. Lambert G. Palmer, of the ill-fated Huron, was among the number who perished in the storm and darkness of Friday night of Kittyhawk, the wedding of his sister and Mr. Adams, of the British Legation, which was to have occurred upon Thanksgiving Day, will doubtless be postponed. The young lieutenant whom we remember to have seen last summer so full of life and promise among the gay society of Fortress Monroe while his vessel was stationed in Hampton Roads, was only twenty-six years old. He was a son of Commodore J.C Palmer, United States Navy and brother of Aulich Palmer, United States Marine Corp and was appointed to the Naval Academy in 1863 by President Lincoln. Less than three short years ago he was married to one of Philadelphia’s [should be Baltimore] fairest daughters, Miss Ashurst, who now resides with her two babies – the youngest an infant of but few months – on Sixteenth Street, near F. It is generally a mistaken kindness that, fearing to break bad news too suddenly, withholds definite information, even for an hour. The heart is a muscle and cannot break, but any certainty, however terrible, is better than the agonizing suspense between hope and fear, which sometimes whitens heads and does the work of years in a single night.

Lambert is one of 11 members of the Class of 1868 on Virtual Memorial Hall.

The "category" links below lead to lists of related Honorees; use them to explore further the service and sacrifice of the alumni in Memorial Hall.
Retrieved from "http://usnamemorialhall.org/index.php?title=LAMBERT_G._PALMER,_LT,_USN&oldid=120119"
Categories: