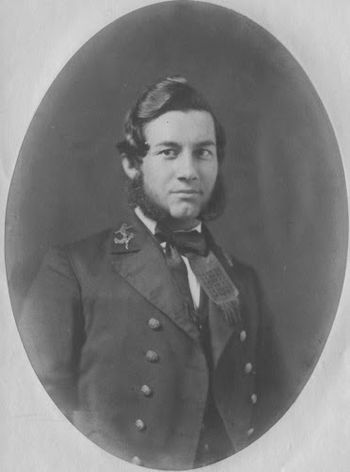 1855, September 24, appointed an Acting Midshipman on probation at the Naval Academy, from Virginia. 1860, June 15, graduated, and warranted as a Midshipman. July 24, ordered to the Susquehanna, Mediterranean Squadron, to report on the 15th of August. 1861, July 5, dismissed the service, having tendered his resignation.

Lieutenant James L. Tayloe was wounded in the naval action at Newport News, March 8, 1862, and died at the Naval Hospital, Norfolk, on the 11th. He was born in Roanoke County, Virginia, and had attained his twenty-first year. He was a graduate of the Naval Academy, at which institution he was entered in 1855. In July, 1861, he returned to the United States from abroad, and threw up his appointment in the old service to offer his professional abilities to his native State. Habitually we speak well of the dead. The beautiful maxim of the ancients is easily violated; but, in his case, no ill could be spoken of him. There is no need of empty eulogy or formal praise. The actions by which his brief career were embellished are his most eloquent biographers. In August he was promoted for energy and good conduct at Oregon Inlet, and appointed Master Commanding to the prize steamer Fanny.

At the naval battle of Roanoke he was conspicuous for skill and courage. At Elizabeth City he fought his vessel to the last and then left her in flames, escaping as by miracle from the perils by which he was surrounded. For these distinguished exhibitions of valor and good conduct he was again promoted to the grade he held at the time of his untimely death. Two brevets within six months constitute in themselves most eloquent attestations of his skill and gallantry as an officer. It was in the last chapter of his short, brave life that these qualities were conspicuously displayed. He left the capital, which naturally had claims for a young and distinguished man, and hurried down to join his companions in arms on board the Raleigh, as a volunteer in the perils and glories of the expedition in which he fell.

On that memorable day the writer of this just tribute saw him on board that vessel, radiant with life. Full of noble aspirations and animated by a lofty patriotism he went down to meet the enemy. Sustained by that knightly courage which told him the post of honor was the post of danger, he bore himself gallantly through the fight, until at half-past four on the afternoon of that glorious day he fell, alongside the Congress, shot through the body by a fire of musketry at short range from the shore.

The melancholy fate of this gallant man is shrouded in a still deeper gloom by the fact that he fell in attempting a duty of humanity—that he fell in a mission of mercy, for his duty was to remove the Federal wounded, over whom the white flag was flying.

From the moment he was thus cruelly shot down he bore his sufferings with a fortitude which showed his mind and temper equal to any fate. He discharged his last earthly duties with heroic composure, and so, at seven o’clock on Tuesday morning, his soul went up to, the God who gave it and his name passed into the pages of history.

His personal character was above all praise. Of a generosity which knew no negative; of an amiability which had no feuds; of a candor which had no concealments, and a warmth of temper which made him a friend to all with whom he was associated, he was loved by all who knew him—praised by all who spoke his name.

His person was as prepossessing as his character. Of a hopeful and resolute aspect, he united the frankness of the seaman with the courtliness of a Virginia gentleman. The graceful proportions of his body corresponded well with his happy temper and gracious mind; in short, the kindly elements all blent in him to “Give the world assurance of a man.”

Henceforward when men speak of the heroes of this war, the name of Tayloe will be tenderly spoken. When the historians look for grand heroic figures to embellish their work the graceful figure of this gallant young seaman will live again, and his fame on earth will be as enduring as man’s admiration for chivalry of character and nobility of soul. And now that it hath pleased the Almighty to take out of this world the soul of our departed brother, let these so sorely smitten remember that he fell with his front to the enemy ; that while his mortal remains rest on the “ deathbed of fame,” his spirit has ascended to the God who gave it, and that their sorrow is felt and shared by all who knew him. “ The Lord hath given, and the Lord hath taken away; blessed be the name of the Lord.” James B. Hope

Note this is the only report found of him being killed while under a white flag of truce. It is also unlikely Congress was within small-arms range of the shore; the area was, however, under artillery fire.

His last name was spelled "Tayloe." Memorial Hall has "Taylor."

Retrieved from "http://usnamemorialhall.org/index.php?title=JAMES_L._TAYLOE,_LT,_CSN&oldid=139536"
Categories:
Hidden categories:
This page was last modified at 16:40 on 14 July 2021.
About USNA Virtual Memorial Hall