John Bradley was admitted to the Naval Academy from New York on September 21, 1858 at age 14 years 11 months. 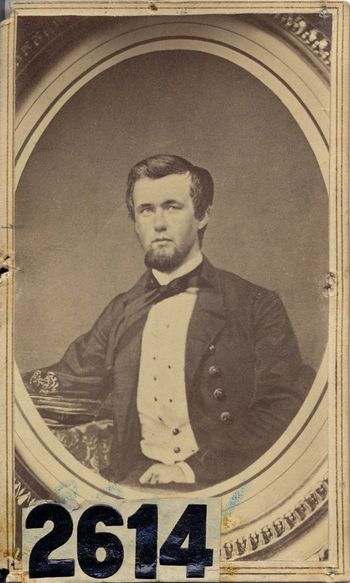 John was lost on April 24, 1862 when USS Richmond (1860) was damaged by shore battery fire in the Mississippi River during the Battle of Forts Jackson and St. Philip near New Orleans, Louisiana.

He is buried in Connecticut.

John is listed on the killed in action panel in the front of Memorial Hall.

John’s father was Army Colonel John Bradley. His mother was Sarah, and his sister was Mary. The family lived in Brownville, New York, in the 1850 and 1860 census years.

John was acting master’s mate when he was shot by a rifle ball while beside his commander James Alden. Alden wrote that John “was shot down at my side while gallantly performing his duty as my aid.” Immediately, Alden’s clerk, Mr. Bogart, took John’s place. John was first buried on April 26 at New Orleans. On June 5, the USS Connecticut came up the river, and John’s remains were disinterred and put in a metallic coffin to be sent to his friends. The ship also took the invalids and 200 men whose enlistments would soon be finished. John was buried in the Brooklyn Navy Yard Hospital Cemetery. He was then reinterred in St. Peter’s Church Cemetery, Cheshire, Connecticut, on 10/9/1871. Also buried in this cemetery are his father and sister. His father was born in Connecticut.

John is one of 14 members of the Class of 1863 on Virtual Memorial Hall.

The "category" links below lead to lists of related Honorees; use them to explore further the service and sacrifice of the alumni in Memorial Hall.
Retrieved from "http://usnamemorialhall.org/index.php?title=JOHN_B._BRADLEY,_MIDN,_USN&oldid=125635"
Categories:
Hidden category: