Jesse Mims Roper was admitted to the Naval Academy from Glasgow, Missouri on June 23, 1868 at age 16 years 7 months. 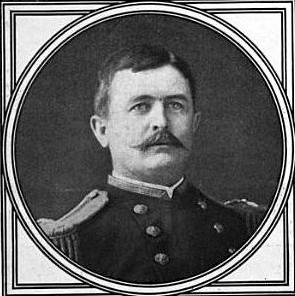 Born at Glasgow, Missouri, Roper was appointed midshipman in June 1868 and graduated from the United States Naval Academy in 1872. Commissioned lieutenant commander in 1899, he assumed command of USS Petrel (PG-2) shortly thereafter. On 31 March 1901, while Petrel was moored at Cavite, Philippine Islands, fire broke out in the sail room, adjacent to the magazines. Lieutenant Commander Roper went down into the burning area twice to rescue trapped seamen. Lieutenant Commander Roper was overcome by smoke on his second descent and suffocated before help could reach him.

USS Roper (DD 147) was named for Jesse; the ship was sponsored by his widow.

Jesse's classmates erected a plaque to his honor in Memorial Hall.

Ensign, Supply
Others at this command:
Master James Wight '71

Master, Training-ship Minnesota
Others at this command:
LT Boutelle Noyes '68

Master, Lackawanna
Others at this command:
LT James Carlin '68

Lieutenant, Monadnock
Others at this command:
LTjg Albert Beecher '84

Jesse is one of 2 members of the Class of 1872 on Virtual Memorial Hall.

Retrieved from "http://usnamemorialhall.org/index.php?title=JESSE_M._ROPER,_LCDR,_USN&oldid=125700"
Categories:
Hidden category:
This page was last modified at 15:37 on 28 July 2020.
About USNA Virtual Memorial Hall