Albert Morrison Beecher was admitted to the Naval Academy from Iowa on June 11, 1880 at age 17 years 4 months. 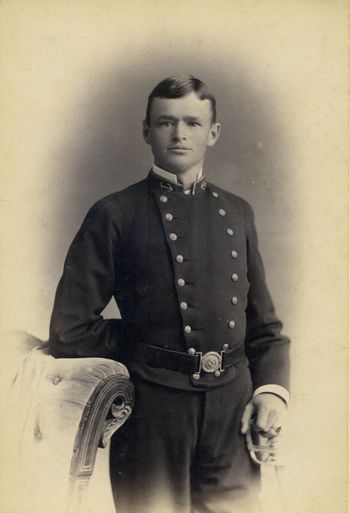 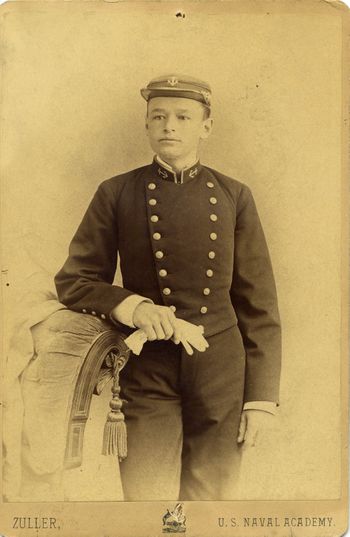 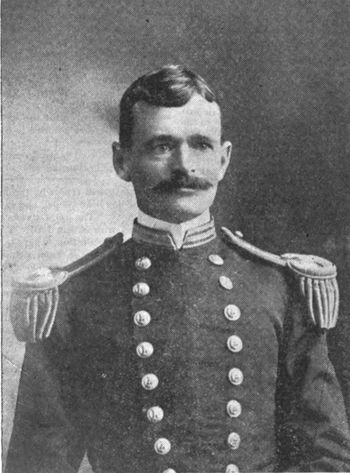 From the Army-Navy-Air Force Register and Defense Times of March 9, 1904

Lieutenant Albert M. Beecher, U.S. Navy, lost his life by falling down the turret of the U.S.S. Maine, November 3, 1903, while in the performance of official duty.

Lieutenant Beecher was born in Fort Dodge, Iowa, February 12, 1863, and appointed from Iowa to the Naval Academy in June, 1880, and graduated with honors from that institution in 1884. He was not only a brilliant officer, but possessed, to a remarkable degree, the power of application, study and concentration.

In the performance of every duty he was exceedingly thorough and conscientious. Conservative by nature, and calm in judgment, he was yet, nevertheless, prompt in decision and quick in action.

His professional career was of an exceedingly varied character. He rendered valuable service in connection with survey work in Alaska. He was a member of the Guam survey board, wherein his general information and knowledge were of high value. His last shore duty was at the bureau of equipment, where he performed service as wireless telegraphy expert of the Navy.

Lieutenant Beecher possessed a constructive engineering mind in addition to a rare capacity for leadership. By reason of his inclination for technical work, he had a special desire to fit himself for important duty of this nature, and engineering interests in the Navy experienced a loss in his death.

The important service that he rendered the Navy is known in its fullness to his conferrers at the bureau of equipment, and the results attending the special work performed by him at the department will be evidenced in the more efficient equipment of the armored cruisers and battleships that are about to go into commission or are in process of construction.

By reason of his unassuming and unselfish nature, he was greatly beloved in the service, and especially was this nobility and gentleness of character recognized by his classmates of 1884. Efficient in the discharge of every duty assigned him, considerate to those serving under him, keeping in touch with his contemporaries, loyal to his superiors, and with an earnest love for the Navy, he was the type of officer who, by precept and example, upheld the best an highest traditions of the service.

After military services on the U.S.S. Maine at Newport, R.I., the remains were accompanied to Fort Dodge, Iowa, by Passed Assistant Paymaster James S. Beecher, his brother, for interment, where they were met by his mother, Mrs. P.E. Beecher, and brother, H.L., of New Ulm, Minn, and sister, Mrs. C.T. Howard, of Redwood Falls, Minn.

Albert’s father was Hezekiah, an attorney and former clerk of the courts at Spink County, South Dakota. His mother was Pauline; brothers were Edward, Henry Lee, and James; and sisters were Eugenia “Jennie” and Harriet.

Lieutenant Beecher was an ordnance officer and was superintending the firing of the 12-inch guns from the forward turret. A lurch of the vessel caused him to lose his balance and he fell down the ammunition chute to the handling room, a distance of 40 feet, striking on his head.

He was picked up unconscious and carried to the sick bay where Medical Inspector Blake and other officers worked in vain to restore consciousness.

Word was sent by Captain Eugene H. C. Leutz to Admiral Chadwick at the Naval Training station by wireless telegraphy, and he ordered the battleship to make for Newport with all speed, giving instructions that no salute should be fired when she entered the harbor.

Every ounce of steam available was crowded on by the engineers, and the vessel was sent along at a rate that churned the water high up on her bow. The race with death ended in defeat, however, and before the harbor was reached Lieutenant Beecher had died without ever regaining consciousness. …

Lieutenant Beecher was an efficient officer and was very popular on board the vessel. He was a brother of Paymaster James S. Beecher, on training ship Monongahela.

After graduating from the Naval Academy, Albert “made a voyage across the Atlantic in the Quinnebaug, a wooden frigate of the old navy, and remained two years upon the European station. Upon his return to America in 1886 he was promoted to the grade of ensign and ordered to California with a coast survey expedition. Subsequently he made four separate journeys to Alaska on coast survey work and then followed two years of active service in the South Sea islands. In 1893 he was appointed inspector of naval work at the Bethlehem iron works, Bethlehem, Pa., and for upwards of a year superintended the manufacture of armor plate for the cruisers and war vessels then on the stocks. When relieved at Bethlehem he served for three years upon the battleship Texas, the monitor Monadnock and the gunboat Charleston, and was then returned to the national capital at Washington to take charge of the bureau of equipment, fitting out all of the ships of the navy with their torpedo stores.

The declaration of war with Spain found him occupying this position and it is needless to say that he chafed under what he considered his confinement and inactivity. … [after the war] he was sent to Philadelphia and given charge of the construction work upon several ships being built by the Cramps in their yards in that city and Wilmington, Delaware. … In command of the Eagle, he sailed to Cuba in 1899 on a coast survey and the following year went to Guam as a member of the commission to locate a naval station. During the previous winter congress had voted an appropriation to defray the expenses of a preliminary survey and estimate for a naval and coaling station on the island of Guam and the deceased was named as one of the members of the commission, the others being Major Biddle, chief engineer of the army of the Philippines, and Admiral Merry, commandant of the naval station of Honolulu. Upon their findings congress has since granted a portion of the appropriation they recommended and work upon the station has been commenced.

Nearly two years ago, Lieut. Beecher was detailed to conduct the wireless telegraphy experiments being made by the naval department and remained so employed until last spring, when he was ordered to the new battleship Maine, as ordinance officer and fourth in command. …

Lieut. Beecher possessed a strong but beautiful character. Ever thoughtful of others, his gentleness was dignified and he bore more than a son’s love for his mother. Although abroad in the world much of his life, he never severed the home ties and his first care upon returning to his native land was to learn of his mother and summon her to him. Many were the pleasant months that they spent together and his going will leave a great void in her life. In simple eulogy, he was an efficient and intrepid officer, an upright man and a devoted son.

Lieutenant, Member Board on Survey, Guam

Albert is one of 2 members of the Class of 1884 on Virtual Memorial Hall.

The "category" links below lead to lists of related Honorees; use them to explore further the service and sacrifice of the alumni in Memorial Hall.
Retrieved from "http://usnamemorialhall.org/index.php?title=ALBERT_M._BEECHER,_LT,_USN&oldid=125906"
Categories: