Nathaniel Stockwell Moseley was admitted to the Naval Academy from California on March 22, 1880 at age 18 years 0 months. 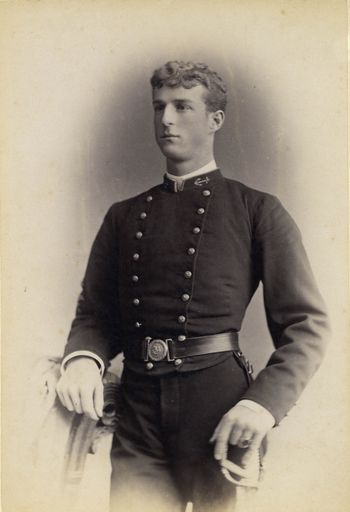 Astoria (Or.), Sept. 20. The United States Government surveying steamer McArthur, which has been surveying Shoal Water bay arrived this morning with her flag at half mast, and bearing the body of Ensign N. S. Moseley. He and a draughtsman started ashore in a sail boat on Sunday to get mail at Oystervllle. When halfway across a heavy squall struck the boat, which capsized, throwing the occupants into the water. They clung to the boat and were exposed in the ice-cold water nearly four hours. Finally the two men righted the boat and managed to reach shore in an exhausted condition, and were conveyed to the steamer McArthur. Ensign Moseley soon after was attacked with a violent congestive chill and died in a short time. The deceased was aged 25. He leaves a wife and child at Stockton, Cal. The remains will be embalmed and sent to San Francisco by the next steamer.

Nathaniel's wife's name was Claudia. He is buried in Stockton, California.

He was one of several dozen midshipmen who were involved in a hazing incident in 1881.

In June 1884 he was ordered to the ship Hartford.

Nathaniel is not listed with his classmate in Memorial Hall. This oversight was discovered by researcher Kathy Franz.

Nathaniel is one of 2 members of the Class of 1884 on Virtual Memorial Hall.

The "category" links below lead to lists of related Honorees; use them to explore further the service and sacrifice of the alumni in Memorial Hall.
Retrieved from "http://usnamemorialhall.org/index.php?title=NATHANIEL_S._MOSELEY,_ENS,_USN&oldid=123967"
Categories:
Hidden category: