William Kern Gise was admitted to the Naval Academy from Dwight, Illinois on June 14, 1889. 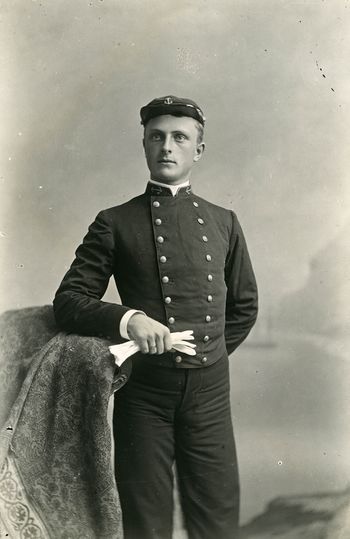 William Kern Gise "died while on duty" on June 28, 1909 as the executive officer of the naval station at Tutuila, Samoa. Unable to determine the circumstances of his death, but there is nothing to suggest it was operational in nature. The annual report of the Department of the Navy for 1900 included that the only death at the station was "recorded as a suicide."

Register of Alumni gives date of death as June 29 but no other information.

He was survived by his mother and two siblings; he is buried in Arlington National Cemetery. (William's body was originally buried in Samoa, but re-interred in September 1910.)

In 1906 he was stationed in the Washington, D.C. area; as a Lieutenant he was in charge of "a battalion of marines and bluejackets" during a funeral at Arlington National Cemetery. He was promoted to Lieutenant Commander in 1907.

He was a veteran of the Spanish-American War, having served in Texas during the Battle of Santiago. He at one time commanded the presidential yacht Sylph.

William is one of 2 members of the Class of 1893 on Virtual Memorial Hall.

The "category" links below lead to lists of related Honorees; use them to explore further the service and sacrifice of the alumni in Memorial Hall.
Retrieved from "http://usnamemorialhall.org/index.php?title=WILLIAM_K._GISE,_LCDR,_USN&oldid=135832"
Category:
Hidden categories: