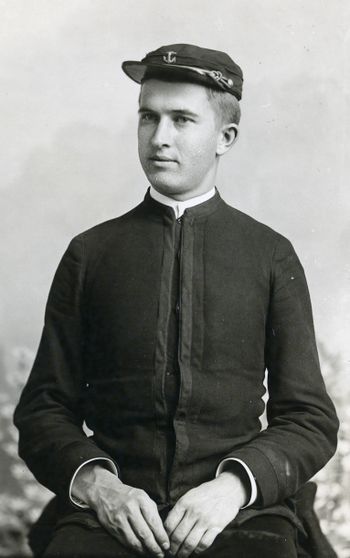 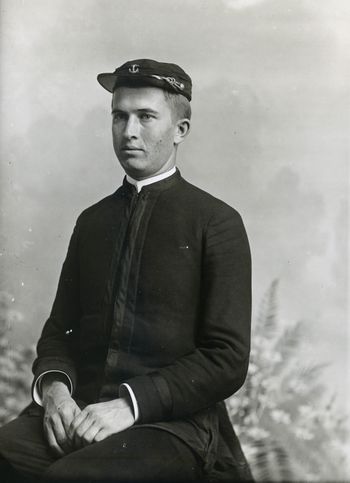 John was lost on April 14, 1906 when the gunpowder from a 13" gun aboard Kearsarge (Battleship No. 5) ignited accidentally, killing another officer and eight men.

He was survived by his wife and son; John is buried in Arlington National Cemetery.

Lieutenant John Milton Hudgins was appointed as a naval cadet from Virginia in September, 1890. He was graduated from the Naval Academy in June, 1894, and was sent to serve on the Detroit at the Norfolk Navy Yard. In July, 1895, Lieutenant Hudgins was promoted to the grade of assistant engineer and continued to serve in that capacity at the Norfolk Navy Yard until the following August when he was detached and ordered to London for a course of instruction, during which time he was attached to the American Embassy. On March 3, 1899, Lieutenant Hudgins' rank was changed from assistant engineer to Ensign. He subsequently reached the grade of lieutenant on September 26, 1901. He was attached to the bureau of equipment of the Navy Department soon after his last promotion and in October, 1903, was sent to the Kearsarge. A year ago he was given three months' sick leave, and upon his return to the Kearsarge was placed in charge of the wireless telegraph tests, which were being instituted by the bureau of equipment.

John's classmates erected a plaque in Memorial Hall "in commemoration of an act of self sacrifice and devotion to duty."

Joseph Graeme '97 was also lost in this incident.

John is one of 2 members of the Class of 1894 on Virtual Memorial Hall.

The "category" links below lead to lists of related Honorees; use them to explore further the service and sacrifice of the alumni in Memorial Hall.
Retrieved from "http://usnamemorialhall.org/index.php?title=JOHN_M._HUDGINS,_LT,_USN&oldid=131092"
Categories: