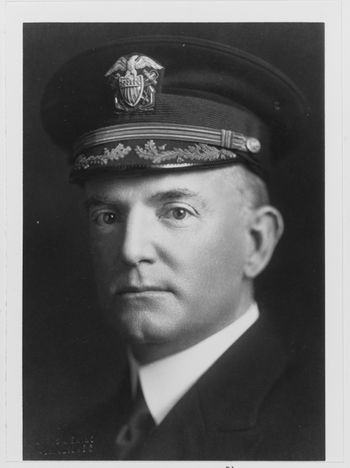 "Photographed March 18, 1921 by Harris & Ewing, Washington, DC. He was then stationed at the Navy Department." 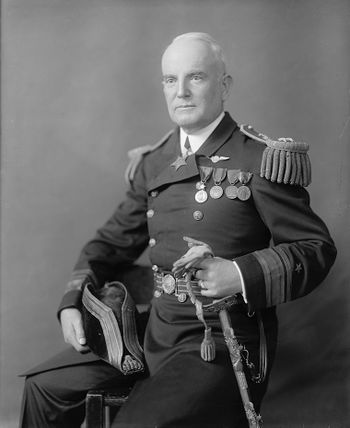 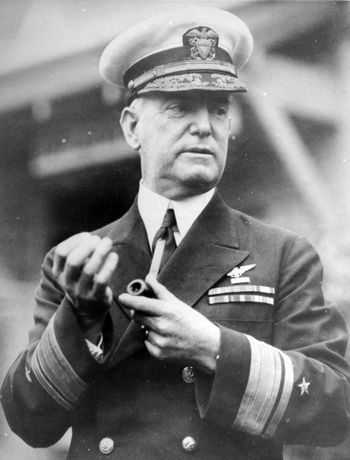 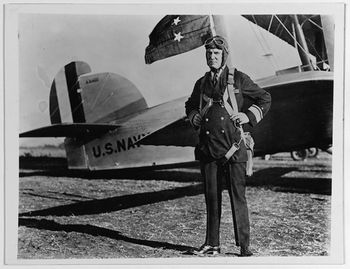 "View taken while chief of the Bureau of Aeronautics in 1928. Note parachute harness, flying helmet and two-starred flag on the plane behind. Aircraft is Douglas DT-2." 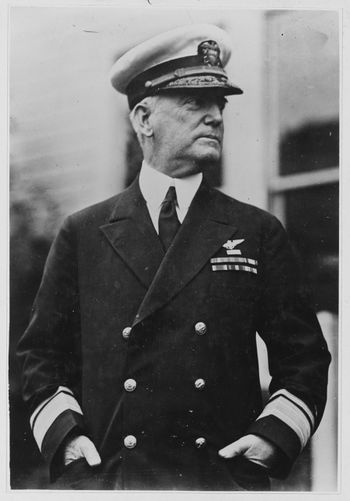 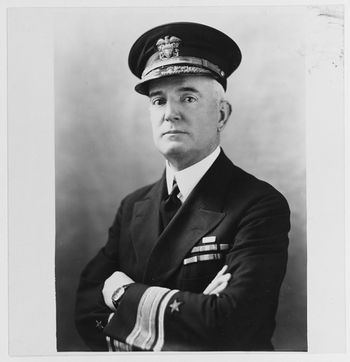 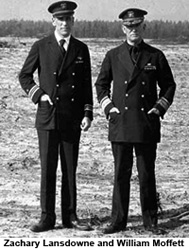 William Adger Moffett was born in Charleston, South Carolina, on 31 October 1869. He was appointed Naval Cadet from the First South Carolina District by the Hon. Samuel Dibble and entered the US Naval Academy, Annapolis, Maryland on 6 September 1886. He was graduated on 6 June 1890, and after the two years' sea duty then required by law before commissioning, was commissioned an Ensign in the US Navy on 1 July 1892. His advancement was as follows: Lieutenant (jg), 3 March 1899; Lieutenant, 13 July 1899; Lieutenant Commander, 1 July 1905; Commander, 4 March 1911; Captain, 29 August 1916; and Rear Admiral, to date from 25 July 1921.

Following graduation from the Naval Academy in June 1890, he served successively on board USS Pensacola, USS Baltimore, USS Portsmouth, USS Chicago and on 23 April 1895 he joined USS Amphitrite as Watch and Division Officer. Detached a year later, he was a student at the Naval War College from June to October 1896, then reported to TS Constellation for brief duty, after which he served for two years on board the Nautical School Ship Enterprise.

From January 1898 to February 1899 he had successive service as Watch and Division Officer on board USS Mohican and USS Charleston, serving during the Spanish-American War with Admiral Dewey in the Battle of Manila Bay. He continued sea duty in Charleston, and later USS Baltimore, USS Monongahela, USS Kentucky and USS St. Mary's. On 15 November 1902, he reported to USS Minneapolis for engineering duty, and was transferred to USS Maine upon her commissioning, 29 May 1903. He was detached on 2 June 1904, with orders to duty as Executive Officer of USS Amphitrite.

On 22 April 1904, he assumed command of the Naval Station, Guantanamo, Cuba, with additional duty on board Amphitrite and as Captain of the Yard. He returned to the United States for instruction in the Compass Office of the Bureau of Equipment, Navy Department, Washington, DC, and upon completion of that assignment attended the Summer Conference of Officers at the Naval War College. He returned to the Bureau of Equipment in September 1906, and served there until 31 March 1908.

Duty as Navigator, later as Executive Officer of USS Maryland preceded a tour of shore duty as Inspector of the Eighteenth Lighthouse District, San Francisco, California. On 30 June 1912, he reported to the works of the William Cramp and Sons Ship and Engine Building Company, Philadelphia, Pennsylvania, for duty in connection with fitting out USS Arkansas. He joined that battleship as Executive Officer on her commissioning on 7 July 1912, and served in that capacity until 24 October 1913.

Relieved of command of Chester on 16 September 1914, he assumed duty as Commandant of the Naval Training Station, Great Lakes, Illinois, and additional duty as Supervisor of the Ninth, Tenth, and Eleventh Naval Districts. He continued his primary duty as Commandant of the Naval Training Station, in the rank of Captain, during the entire World War I period, expanding that previously small station to the largest recruit training depot in the United States, from which most of the trained naval personnel was furnished for all the naval activities during the war period.

He was awarded the Distinguished Service Medal for his wartime accomplishment, the citation stating: "For exceptionally meritorious service in a duty of great responsibility as Commandant of the NINTH, TENTH, and ELEVENTH Naval Districts and Commandant of the Great Lakes Naval Training Station."

On 10 December 1918, shortly after the Armistice, he became Commanding Officer of USS Mississippi, and after two years in that command, he returned to shore duty. On 3 January 1921, he reported to the Office of the Chief of Naval Operations, Navy Department, and on 7 March 1921, assumed duty as Director of Naval Aviation. He was commissioned the first Chief of the Bureau of Aeronautics, with the accompanying rank of Rear Admiral, for a term of four years from 25 July 1921; was reappointed Chief of that Bureau by President Calvin Coolidge on 13 March 1925; and again reappointed by President Herbert Hoover on 13 March 1929.

Having been qualified as a Naval Aviation Observer on 17 June 1922, while serving as Chief of the Bureau of Aeronautics (his first term), he had temporary additional duty from January to April 1930 as Assistant to the Naval Advisors to American Representatives on the London, England, Naval Conference.

During the latter years of his service as Chief of the Bureau of Aeronautics, Rear Admiral Moffett was recognized as more experienced in all types of airplanes, seaplanes and big airships than "any Admiral in any Navy in the World." The development of lighter-than-air in America was largely due to his vision, determination, and untiring efforts, the result of which was seen in the building of USS Akron and USS Macon. He was killed in the crash at sea of USS Akron on 4 April 1933.

A destroyer, USS Moffett, named to honor him, was christened by Admiral Moffett's daughter, Beverly, at the launching at Quincy, Massachusetts, on 11 December 1935, and was placed in commission on 27 August 1936. In April 1936 a trophy, designated the "Rear Admiral William Moffett Memorial Trophy," was purchased with funds received from Naval Aviators, to be awarded annually in memory of Admiral Moffett to the battleship or cruiser based aviation unit conducting its operations throughout the year with the maximum of safety.

He was survived by his wife and six children. William is buried in Arlington National Cemetery.

Akron's executive officer, LCDR Herbert V. Wiley '15, one of only three survivors, was filmed shortly after the crash: 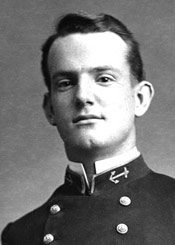 The President of the United States of America, in the name of Congress, takes pleasure in presenting the Medal of Honor to Commander William Adger Moffett, United States Navy, for distinguished conduct in battle on board the U.S.S. CHESTER during the engagements of Vera Cruz, Mexico, 21 and 22 April 1914. Commander Moffett brought his ship into the inner harbor during the nights of the 21st and 22d without the assistance of a pilot or navigational lights, and was in a position on the morning of the 22d to use his guns at a critical time with telling effect. His skill in mooring his ship at night was especially noticeable. He placed her nearest to the enemy and did most of the firing and received most of the hits.

The President of the United States of America takes pleasure in presenting the Navy Distinguished Service Medal to Captain William Adger Moffett, United States Navy, for exceptionally meritorious service in a duty of great responsibility as Commandant of the NINTH, TENTH, and ELEVENTH Naval Districts, and Commandant of the Great Lakes Training Station. 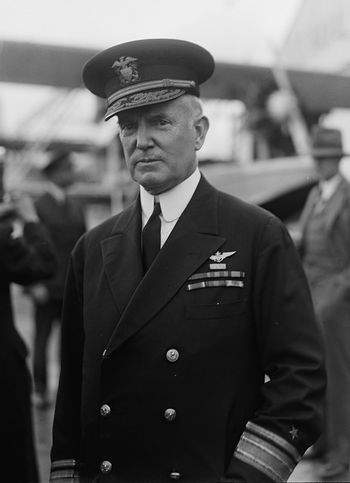 USS Moffett (DD 362) was named for William; the ship was sponsored by his daughter, Beverly.

"John Philip Sousa's march, "The Aviators" is dedicated to William J. Moffett, the man responsible for Sousa's commission in the American Navy during World War I."

Moffett Federal Airfield, which he helped found as a Naval Air Station, was renamed for him shortly after his death.

The headquarters of the Naval Air Systems Command is named for William.

He is a member of The National Aviation Hall of Fame.

Others at this command: Naval Cadet William Snow, Jr. '90.

Others at this command: ENS Ralph Griswold '02.

Others at this command: MIDN Clarence Thomas '08.

Others at this command: ENS Howard Lammers '08.

Others at this command: LT George Cuddihy '18.

Others at this command: LT George Cuddihy '18.

Others at this command: LCDR Henry Mullinnix '16 and LT Stanton Wooster '17.

Others at this command: LCDR Henry Mullinnix '16 and LT Stanton Wooster '17.

Others at this command: LTjg Herbert Wescoat '23.

Others at this command: CDR Walter Webster '11 and LCDR Robert Fleming '17.

The "category" links below lead to lists of related Honorees; use them to explore further the service and sacrifice of the alumni in Memorial Hall.
Retrieved from "http://usnamemorialhall.org/index.php?title=WILLIAM_A._MOFFETT,_RADM,_USN&oldid=107218"
Categories: