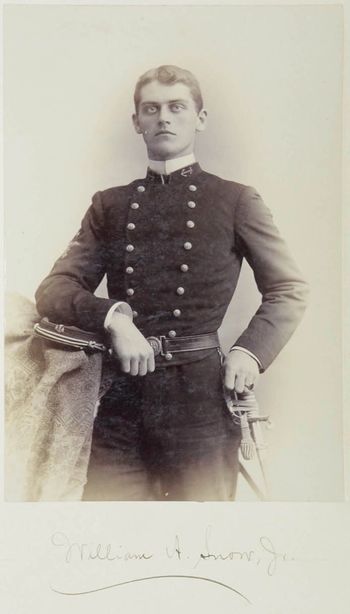 William died of "heart failure" aboard the cruiser Charleston while she was in Montevideo, Uruguay. His death occurred on April 12, 1894. (Information from death notice located by Kathy Franz.)

He was survived by his parents and a brother (Sydney Bruce Snow), and is buried in Wildwood Cemetery, Winchester, Massachusetts. William's father was also named William Alanson Snow.

CDR Henry Nichols '65 (Board of Inspection and Survey, San Francisco)

The "category" links below lead to lists of related Honorees; use them to explore further the service and sacrifice of the alumni in Memorial Hall.
Retrieved from "http://usnamemorialhall.org/index.php?title=WILLIAM_A._SNOW,_JR.,_ENS,_USN&oldid=135810"
Category:
Hidden categories: