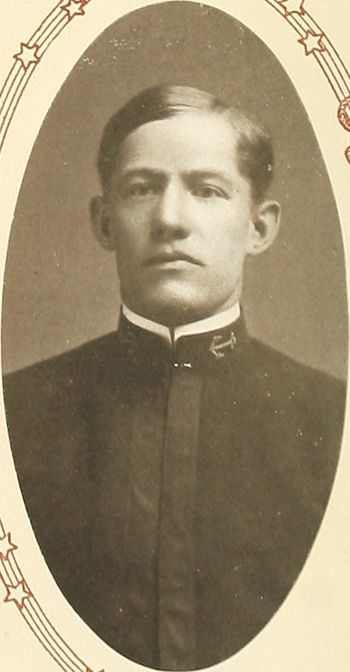 "Hear the latest? Fletcher says we get two months' leave!

A fleet-footed cherub who has run as well as talked his way through the Academy. Has run everything from the hundred-yard dash and the instructor to a free-lunch counter—poco rolls only. Vice-President and chief talker of the gossip club.

"Boatswain's mate! wake up the sailors."

"Hear the latest? Fletcher says we get two months' leave!

A fleet-footed cherub who has run as well as talked his way through the Academy. Has run everything from the hundred-yard dash and the instructor to a free-lunch counter—poco rolls only. Vice-President and chief talker of the gossip club.

"Boatswain's mate! wake up the sailors."

Burns and Other Injuries Suffered in Aerial Crash Fatal

Both officers, attached for aviation at the American embassy in London, were injured when their plane crashed into a tree near Caterham, in Surrey, and burst into flames.

Mrs. Andrew Burg received the sad news of the death of her son, Lieutenant Commander Robert A. Burg, in a message from the bureau of navigation received by R. R. Horth, friend and advisor of the family, Sunday afternoon.

Robert A. Burg was born at Sidney, Nebraska, December 18, 1884, being in his forty-second year. With his parents he came to Grand Island when a lad, attended the public schools in this city, graduated from the high school, attended the state university, and while so doing was appointed as a cadet at the United States naval academy at Annapolis, Maryland, where he ranked high as a student and excelled in athletics. He graduated in 1908 and was with the United States fleet which, under the administration of President Roosevelt, was sent around the world.

Immediately preceding the World war, he was in command of the construction of submarines, and during the war her served in command of the submarine forces of the United States. After the close of the war, Mr. Burg qualified himself as an expert in naval radio service, and then took up naval aviation and for three years was second in command of the aviation forces at San Diego, Cal. His service in the navy has been one of distinction and without blemish. A year ago, by merit and ranking qualifications alone, he was honored by the president by being appointed as naval attache at the American embassies in London, Paris, Berlin and The Hague, and was in the line of this duty when the accident occurred, which resulted in his untimely death.

His ability, ambition, perseverance and exemplary life, as a son, husband, citizen and soldier were worthy of a better fate. All who knew him in life loved and respected him and now mourn his tragic passing.

A cablegram from Mrs. Robert Burg who was with her husband, when the end came, stated that the body would be returned to Grand Island for burial in the family plot.

Besides his widow and mother, he is survived by one sister, Mrs. W. A. Heimberger, of Mitchell, S. Dak. his father, the late Andrew Burg, died here about a year ago and one brother, Webster, preceded him in death several years ago.

Robert was also commanding officer of Torpedo & Bombing Squadron TWO in 1922 and 1923.

He is buried in Nebraska.

Major Clarence L. Tinker, Assistant Military Attache for Aviation at the U.S. Embassy and Commander Robert Andrew Burg, Assistant Naval Attache, took off from Kenley at noon in their DH4b, an American service machine kept for use by embassy officials. They didn’t get very far before the aircraft developed engine trouble. Witnesses on the ground became alarmed as it flew low over Caterham valley, towards the cliffs of the chalk quarry, which it narrowly avoided, only to clip the bushes at the top and flip over, coming to rest on top of the hill at Riddlesdown, only a few yards from the quarry’s edge, and bursting into flames, almost opposite the Rose and Crown Hotel.

Tinker had survived the crash and later received the Soldier’s Medal for his unhesitating bravery:

Although injured and in a semi-dazed condition due to the crash, Major Tinker was able to get clear of his burning plane, but when he realized that Commander Burg was still in the cockpit, he rushed back into the flames in an attempt to rescue his passenger. He was driven back by the intense heat, but returned to the other side, and after repeated and determined efforts, being badly burned in the attempt, he extricated Commander Burg and dragged him, unconscious to a place of safety.

Both men were taken to Purley War Memorial Hospital where Commander Burg succumbed to his injuries a week later with his wife at his side. He was 41 years old when he died.

COMMANDER ROBERT ANDREW BURG was born in December 1884 in Cheyenne County, Nebraska. After graduating High School and while attending the state university, he was appointed as a midshipman at the United States Naval Academy at Annapolis, Maryland, where he excelled, graduating in 1908.

Prior to WW1, he worked on submarine construction, which took him into the U.S. submarine forces during the Great War. At the close of hostilities, Burg qualified himself as an expert in naval radio and then took up aviation, becoming second in command of the aviation forces at San Diego, California. At the time of his death, he was Assistant Naval Attache to the American embassies in London, Paris, Berlin and the Hague.

The President of the United States of America takes pleasure in presenting the Navy Cross to Lieutenant Commander Robert Andrew Burg, United States Navy, for distinguished service in the line of his profession as Commanding Officer of the U.S.S. O-8, engaged in the important, exacting and hazardous duty of patrolling the waters infested by enemy submarines, destroyers, and mines, protecting vitally important convoys of troops and supplies; and in offensive and defensive action, vigorously and unremittingly prosecuted, against all forms of enemy naval activity.

Robert is one of 7 members of the Class of 1908 on Virtual Memorial Hall.

The "category" links below lead to lists of related Honorees; use them to explore further the service and sacrifice of the alumni in Memorial Hall.
Retrieved from "http://usnamemorialhall.org/index.php?title=ROBERT_A._BURG,_CDR,_USN&oldid=117121"
Categories: