Charles William Kennedy was admitted to the Naval Academy from Canastota, New York on September 25, 1861 at age 16 years 9 months. 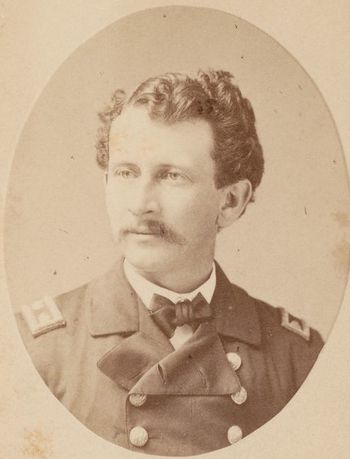 From Proceedings of the United States Naval Institute, 1884:

Charles died of lung disease (intercostal neuralgia), possibly contracted during cold weather duty the previous winter. He had gone to Nevada for his health. He was survived by his wife and their three children, Charles, Robert, and Nathaniel. (Information from wife's pension application; included physician affidavits from doctors in both New Mexico and Michigan, where he had family and was residing as of the 1860 census.)

His death was also reported in two contemporaneous newspaper accounts.

Charles is buried in Michigan.

From researcher Kathy Franz: "Charles participated as a Lieutenant on the Hassler for Harvard Professor Louis Agassiz's expedition to South America including the Galapagos Islands. James Henry Blake kept logs and also this scrapbook where I found Charles' picture."

Lieutenant Commander, Saranac
Others at this command:
LT John Talbot '66

A special thank you to Kathy Franz, a historian who located Charles' cause of death.

Charles is one of 4 members of the Class of 1865 on Virtual Memorial Hall.

Retrieved from "http://usnamemorialhall.org/index.php?title=CHARLES_W._KENNEDY,_LCDR,_USN&oldid=139414"
Category:
Hidden categories:
This page was last modified at 16:39 on 14 July 2021.
About USNA Virtual Memorial Hall