Peter Miller was admitted to the Naval Academy from Kansas on October 1, 1878 at age 18 years 7 months. 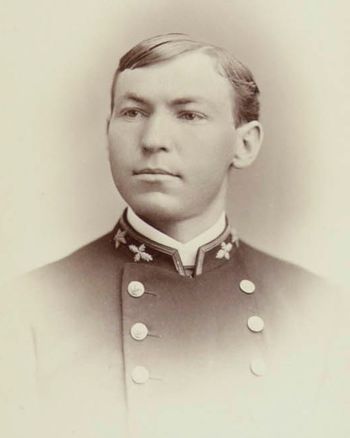 From Proceedings of the United States Naval Institute, 1884:

Naval Cadet Peter Miller. Born, Stockholm, Sweden, February 5, 1860. Appointed a Cadet Engineer, October 1, 1878. Graduated from the Naval Academy, June 8, 1882. Ordered to the Tennessee, July 26, 1882. Died on board the Tennessee, April 3, 1883, at Key West, Florida, having been severely scalded the day previous by the bursting of a steam-pipe while on duty in the fireroom. Sea service, one year, four months; shore duty, three years, one month; total service, four years, six months.

Almost every citizen of Topeka who resided here eight or ten years ago knew Peter Miller, son of Dr. N. Miller, veterinary surgeon. Peter lived in this city from quite a lad, went to our public schools, where he was first in his classes. He was a very bright, active Swede boy, although born in this country. The writer of this well remembers when the young man came to him a few years ago, soliciting his influence with Hon. Thos. Ryan to an appointment at the naval school at Annapolis. He received the appointment, and there as here st30d at the head of ali his classes. A year or two ago, efter he had concluded his studies he visited his home in Topeka, and we were all proud of his manly bearing and the excellent record he had made.

This young man is dead. His father yesterday received a letter from a shipmate of Peter, dated on board U. S. S. Tennessee, off Port Royal, S.C., April 10th, stating that the ship started from the Mississippi river jetties on the 2d inst., and soon after one of the steam pipes burst, fatally scalding Peter. This was at 5 o’clock in the afternoon. He bore his sufferings cheerfully, being perfectly conscious until he died at 7 a. m., April 3d. The steamer stopped at Key West, Florida, where he was buried with military honors. His comrade writes a very feeling letter to Dr. Miller.

Peter is one of 4 members of the Class of 1882 on Virtual Memorial Hall.