John Joseph Blandin was admitted to the Naval Academy from Alabama on June 21, 1878 at age 15 years 10 months. 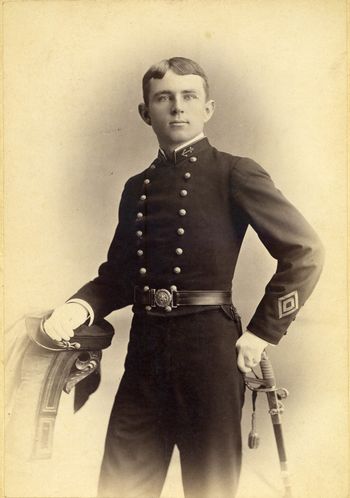 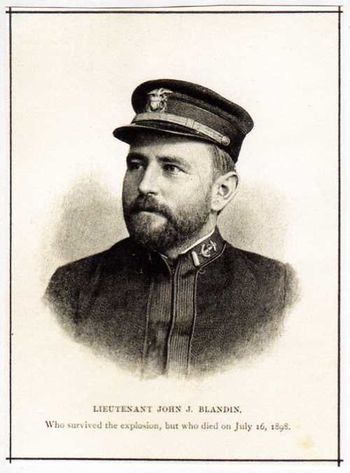 Died from injuries sustained in the sinking of the U.S.S. Maine at Havana, Cuba. He did not immediately die from his injuries, but died of meningitis brought on by the shock received in the explosion. He was the father of John Joseph Blanding who died in Akron Ohio in 1968.

One of the unaccountable Incidents of the disaster is the fact that Lieutenant John I. Blandin was the officer of the deck when the Maine quivered under the forces of the mighty power that shattered her great steel frame to pieces. He was standing well aft in the superstructure, when the solid deck under him sprang upward, throwing him backward with considerable force.

It was not the first time that Lieutenant Blandin had felt his ship go down beneath him. When the great hurricane burst over Apia harbor, he—an ensign then—was deck officer on board the United States ship Trenton. All his watch he had walked the deck and seen the barometer go down, down till it seemed that the mercury in the glass would disappear through the deck. The British steamer Calliope was preparing to run for the open sea while there was yet time, but Admiral Kimberley, watching the anchored German ships, refused to leave the harbor till the gale swept down and held him in its grasp. So Blandin walked the deck watched the glass, while the American admiral waited.

The storm broke, the Calliope slowly pulled out to sea. While the Vandalia, Trenton and Nipsic, with the German ships they were watching, went on the reef.

Blandin, washed from the Trenton's shattered deck, floundered through the breakers and was heaved ashore, battered and bruised. He recovered from his injures, and thought of resigning, believing he had passed through enough horror for one man's life; but he remained in the service to catch the Maine.

Baltimore, Md., July 16 – Lieutenant John J. Blandin, who was officer on the deck on the night the United States battleship Maine was blown up in Havana Harbor., died at noon to-day in the Sheppard-Pratt hospital in this city. His death was the result of meningitis brought on by the shock received when the Maine was destroyed.

Lieutenant Blandin, after giving his testimony before the Board of inquiry at Key West, was assigned to duty at the United States hydrographic office in this city. His wife and two sons lived here and it was thought that the comparatively light duties would aid in restoring his nervous system. This did not prove to be the case, however, and from the day of his return to his home in this city his friends noticed a marked change n his demeanor. He seemed utterly unable to dismiss from his mind the horrors of the fatal night which saw the destruction of the battleship and the death of so many of his comrades, and on July 1 he broke down under the strain and was removed to the hospital. In the delirium which quickly followed he reverted continually to the incidents connected with the destruction of the battleship and fancied himself again on deck issuing orders and aiding in the rescue of his shipmates. His wife was with him continually, but for the past week he has been unable to recognize her. It was hoped until yesterday that he might recover, but his illness took an unfavorable turn and last night his physicians gave up hope.

"I was on watch, and when the men had been piped below I looked down the main hatches and over the side of the ship. Everything was absolutely normal. I walked aft to the quarter deck behind the rear turret, as is allowed after 8 o'clock in the evening, and sat down on the port side, where I remained for a few minutes. Then for some reason I cannot explain to myself now, I moved to the starboard side and sat down there. I was feeling a bit glum, and in fact was so quiet that Lieutenant J. Hood came up and asked laughingly if I was asleep. I said "No, I am on watch." Scarcely had I spoken when there came a dull, sullen roar. Would to God that I could blot out the sound and the scenes that followed. Then came a sharp explosion - some say numerous detonations. I remember only one. It seemed to me that the sound came from the port side forward. Then came a perfect rain of missiles of all descriptions, from huge pieces of cement to blocks of wood, steel railings, fragments of gratings, and all the debris that would be detachable in an explosion." "I was struck on the head by a piece of cement and knocked down, but I was not hurt, and got to my feet in a moment. Lieutenant Hood had run to the poop, and, I supposed, as I followed, he was dazed by the shock and about to jump overboard. I hailed him, he answered that he had to run to the poop to help lower the boats. When I got there, though scarce a minute could have elapsed, I had to wade in water up to my knees, and almost instantly the quarter deck was awash. On the poop I found Captain Sigsbee, as cool as if at a ball, and soon all the officers except Jenkins and Merritt joined us." [Editor's Note: Both Jenkins and Merritt were killed.]

"Captain Sigsbee ordered the launch and gig lowered, and the officers and men, who by this time had assembled, got the boats out, and rescued a number in the water. Captain Sigsbee ordered Lieutenant Commander Wainwright forward to see the extent of the damage and if anything could be done to rescue those forward or to extinguish the flames, which followed close upon the explosion and burned fiercely as long as there were any combustibles above the water to feed them. Lieutenant Commander Wainwright on his return reported the total and awful character of the calamity, and Captain Sigsbee gave the last sad order, "Abandon Ship," to men overwhelmed with grief indeed, but calm and apparently unexcited."

"Meanwhile, four boats from the Spanish cruiser ALFONSO XII arrived, to be followed soon by two from the Ward Line steamer CITY OF WASHINGTON. The two boats lowered first from the CITY OF WASHINGTON were found to be riddled with flying debris from the MAINE and unfit for use. Captain Sigsbee was the last man to leave his vessel and left in his own gig."

"I have no theories as to the cause of the explosion. I cannot form any. I, with others, had heard the Havana harbor was full of torpedoes [Editor's Note: Torpedo was then a synonym for mine], but the officers whose duty it was to examine into that reported that they found no signs of any. Personally, I do not believe that the Spanish had anything to do with the disaster. Time may tell. I hope so. We were in a delicate position on the MAINE, so far as taking any precautions was concerned. We were friends in a friendly, or alleged friendly port and could not fire upon or challenge the approach of any boat boarding us unless convinced that her intention was hostile. I wish to heaven I could forget it. I have been in two wrecks and have had my share. But the reverberations of that sullen, yet resonant roar, as if the bottom of the sea was groaning in torture, will haunt me from many days, and in the reflection of that pillar of flame comes to me even when I close my eyes."

John is one of 4 members of the Class of 1882 on Virtual Memorial Hall.

The "category" links below lead to lists of related Honorees; use them to explore further the service and sacrifice of the alumni in Memorial Hall.
Retrieved from "http://usnamemorialhall.org/index.php?title=JOHN_J._BLANDIN,_LT,_USN&oldid=124716"
Categories:
Hidden category: