Lyman Greenleaf Spalding was admitted to the Naval Academy from Portsmouth, New Hampshire on September 25, 1862 at age 15 years 8 months. 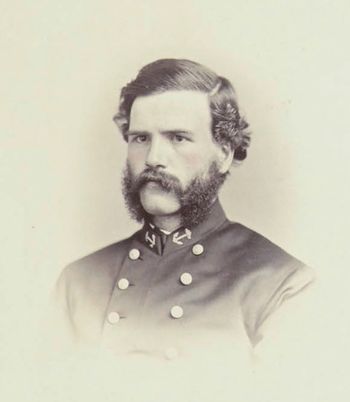 Lieutenant-Commander Benjamin Long Edes and Lieutenant Lyman G. Spalding were killed at Newport, R.I., August 29, 1881, by the explosion of a torpedo, due to mismanagement of an electric switch.

Lyman Greenleafe Spalding was the captain's clerk of the US Steamer "Augusta;" Commander Enoch Greenleafe Parrott (afterwards Rear Admiral), commanding, for about twelve months in the years 1861 and 1862. He took part in the capture of Port Royal, SC, by Rear Admiral DuPont, on November 7, 1861, and afterward served on the blockade of Charleston, SC.

Benjamin Edes '65 was lost in this same incident.

Lyman is one of 5 members of the Class of 1866 on Virtual Memorial Hall.

The "category" links below lead to lists of related Honorees; use them to explore further the service and sacrifice of the alumni in Memorial Hall.
Retrieved from "http://usnamemorialhall.org/index.php?title=LYMAN_G._SPALDING,_LT,_USN&oldid=116843"
Categories: