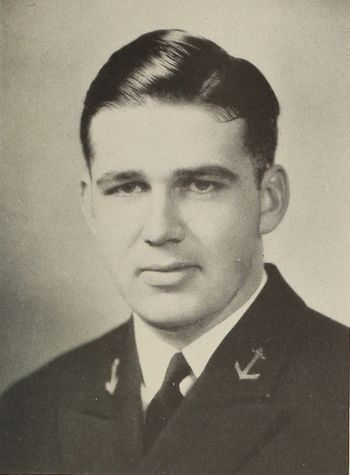 Edward Henry "Butch" O'Hare was born in St. Louis, Missouri, the son of Selma Anna (Lauth) and Edward Joseph O'Hare. He was of Irish and German descent. Butch had two sisters, Patricia and Marilyn. When their parents divorced in 1927, Butch and his sisters stayed with their mother Selma in St. Louis while their father Edward moved to Chicago. Butch's father was a lawyer who worked closely with Al Capone before turning against him and helping convict Capone of tax evasion.

Butch O'Hare graduated from the Western Military Academy in 1932. The following year, he went on to the United States Naval Academy at Annapolis, Maryland. Graduated and appointed an Ensign on June 3, 1937, he served two years on board the battleship USS New Mexico (BB-40). In 1939, he started flight training at NAS Pensacola in Florida, learning the basics on Naval Aircraft Factory N3N-1 "Yellow Peril" and Stearman NS-1 biplane trainers, and later on the advanced SNJ trainer. On the nimble Boeing F4B-4A, he trained in aerobatics as well as aerial gunnery. He also flew the SBU Corsair and the TBD Devastator.

In November 1939, his father was shot to death, most likely by Al Capone's gunmen. During Capone's tax evasion trial in 1931 and 1932, O'Hare's father had provided incriminating evidence which helped finally put Capone away. There is speculation that this was done to ensure that Butch got into the Naval Academy, or to set a good example; it certainly at least partly involved an attempt to distance himself from Capone's activities. Whatever the motivation, the elder O'Hare was shot down in his car, a week before Capone was released from incarceration.

… Designated a Naval Aviator in May 1940, after flight training at Naval Air Station, Pensacola, Florida, he was ordered to Fighter Squadron Three (VF-3) on board USS Saratoga. In June, O'Hare was promoted to Lieutenant Junior Grade. In early 1941, while Saratoga underwent maintenance, the squadron temporarily transferred to USS Enterprise. In September, VF-3 departed for duty with Saratoga in the Pacific. In January 1942, after that carrier was struck by a Japanese torpedo off Hawaii, the squadron relocated to USS Lexington. During this time, O'Hare was temporarily promoted to Lieutenant.

On 20 February 1942, while defending Lexington in a F4F "Wildcat" fighter, O'Hare encountered an advancing formation of nine Japanese bombers east of the enemy base at Rabaul, New Britain. Alone and unaided, he repeatedly attacked the enemy aircraft and was credited with shooting down five of them, and damaging a sixth, before they reached their intended target. For his "conspicuous gallantry and intrepidity" on this occasion, O'Hare was meritoriously promoted to Lieutenant Commander in April 1942 and was awarded the Medal of Honor. Returning to the U.S., he embarked on several war bond tours throughout the country. In June, he assumed command of Fighting Squadron Three (VF-3) and served at Maui, Hawaii, instructing pilots in combat tactics.

In mid-1943, O'Hare commanded Fighting Squadron Six (VF-6) [re-designated from VF-3 in July], flying F6F "Hellcat" fighters from the aircraft carrier Independence during raids against Japanese bases in the central Pacific. In November, as Air Group Six commander on USS Enterprise, O'Hare participated in the Gilbert Islands invasion. On 26 November 1943, O'Hare volunteered to lead a night interception mission against enemy aircraft attacking his task group. His plane was apparently shot down in the ensuing aerial battle, and Lieutenant Commander O'Hare was lost. In memory of the fallen aviator, Chicago's Orchard Depot Airport was renamed O'Hare International Airport in September 1949. Edward H. O'Hare is listed on the "Wall of the Missing" at the National Memorial Cemetery of the Pacific at Honolulu, Hawaii.

His wife was listed as next of kin. Wikipedia's entry includes mention of a daughter, Kathleen, who was born in January or February of 1943.

The President of the United States of America, in the name of Congress, takes pleasure in presenting the Medal of Honor to Lieutenant Edward Henry "Butch" O'Hare (NSN: 0-78672), United States Navy, for conspicuous gallantry and intrepidity in aerial combat, at grave risk of his life above and beyond the call of duty, as section leader and pilot of Fighting Squadron Three (VF-3), attached to the U.S.S. LEXINGTON, on 20 February 1942. Having lost the assistance of his teammates, Lieutenant O'Hare interposed his plane between his ship and an advancing enemy formation of nine attacking twin-engine heavy bombers. Without hesitation, alone and unaided, he repeatedly attacked this enemy formation, at close range in the face of intense combined machinegun and cannon fire. Despite this concentrated opposition, Lieutenant O'Hare, by his gallant and courageous action, his extremely skillful marksmanship in making the most of every shot of his limited amount of ammunition, shot down five enemy bombers and severely damaged a sixth before they reached the bomb release point. As a result of his gallant action--one of the most daring, if not the most daring, single action in the history of combat aviation--he undoubtedly saved his carrier from serious damage.

The President of the United States of America takes pride in presenting the Navy Cross (Posthumously) to Lieutenant Commander Edward Henry "Butch" O'Hare (NSN: 0-78672), United States Navy, for extraordinary heroism in operations against the enemy while serving as Pilot of a carrier-based Navy Night Fighter Plane in Air Group SIX (AG-6), attached to the U.S.S. ENTERPRISE (CV-6), and deployed over Tarawa in the Gilbert Islands. Lieutenant Commander O'Hare personally organized and voluntarily led the first night fighter section of aircraft to operate from a carrier, at night, against enemy aircraft, although he well knew the hazard involved. On the night of 26 November 1943, when the Task Group containing his parent vessel was under threat of imminent attack by Japanese aircraft, off Tarawa, Gilbert Islands, he took off with his night fighter section, which with unswerving devotion to duty and extraordinary skill, intercepted the largest group of enemy aircraft, thereby effectively breaking up that phase of the attack and destroying two Japanese planes. His capable and determined leadership and his extraordinary heroism, which was beyond the call of duty, were responsible in large measure for saving an important Task Group from serious damaged. From this action Lieutenant Commander O'Hare failed to return.

The President of the United States of America takes pleasure in presenting the Distinguished Flying Cross to Lieutenant Commander Edward Henry "Butch" O'Hare (NSN: 0-78672), United States Navy, for extraordinary achievement while participating in aerial flight as Commander of a Fighting Squadron during the attack on Marcus Island, 31 August 1943. He led his squadron in successful and effective strafing attacks in the face of enemy anti-aircraft fire and thereby contributed to the destruction of all ground airplanes and virtually eighty percent of the installations on the island. His exceptional ability to organize and the leadership, judgment, and courage that he displayed contributed materially to the success of the attack. His conduct through was in keeping with the highest traditions of the United States Naval Service.

The President of the United States of America takes pleasure in presenting a Gold Star in lieu of a Second Award of the Distinguished Flying Cross to Lieutenant Commander Edward Henry "Butch" O'Hare (NSN: 0-78672), United States Navy, for extraordinary achievement while participating in aerial flight in the line of his profession as Squadron Commander, Fighting Squadron SIX (VF-6), during operations of United States Naval Forces against Wake Island on 5 October 1943. Upon sighting three enemy fighter planes south of Wake Island, he overtook and single-handedly shot down one of the enemy planes while his unit accounted for the remaining two. In so doing he led his unit in pursuit of a fleeing and damaged enemy down to the runway on Wake Island, where, after this plane was disposed of, he, and his three followers in the face of a concentration of anti-aircraft installations destroyed two twin-engine bombers and a fourth fighter on the ground. Following this action upon intercepting a third twin-engine bomber 20 miles south of Wake Island, he closed with it in an attack so successful that it was in a fatally crippled condition before another plane of his unit joined in its final destruction. His aggressiveness and leadership were in keeping with the highest traditions of the United States Naval Service.

USS O'Hare (DD 889) was named for Butch; his mother sponsored the ship.

Fateful Rendezvous: The Life of Butch O'Hara by Steve Ewing & John Lundstrom was published in 1997.

Edward is one of 45 members of the Class of 1937 on Virtual Memorial Hall.

Retrieved from "http://usnamemorialhall.org/index.php?title=EDWARD_H._O%27HARE,_LCDR,_USN&oldid=156467"
Categories:
This page was last modified at 19:46 on 23 June 2022.
About USNA Virtual Memorial Hall