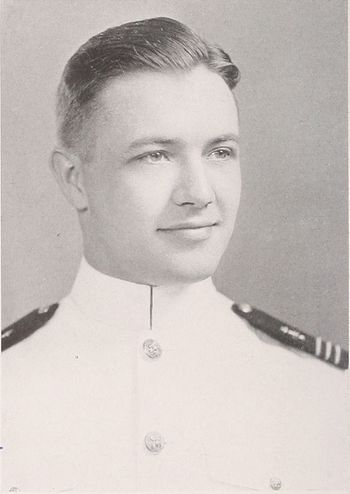 Whether she did happen to be a forty or not, our pal Maxie from West Virginia retorts on Sunday mornings after a hop "She might not be a forty, but she sho' can dance." His drags are usually quite a bit above the line, though. Academics are fruit to him, and with a cheery smile he's willing to lend a helping hand or two to the fellow who doesn't get this stuff. Instead of boning at night, we find him rooting around in all sorts of peculiar books. Before water polo was discontinued, Maxie used to try to commit suicide, but now he's content with kicking the soccer ball around. He's an all around fellow and a sea daddy to the plebes.

Whether she did happen to be a forty or not, our pal Maxie from West Virginia retorts on Sunday mornings after a hop "She might not be a forty, but she sho' can dance." His drags are usually quite a bit above the line, though. Academics are fruit to him, and with a cheery smile he's willing to lend a helping hand or two to the fellow who doesn't get this stuff. Instead of boning at night, we find him rooting around in all sorts of peculiar books. Before water polo was discontinued, Maxie used to try to commit suicide, but now he's content with kicking the soccer ball around. He's an all around fellow and a sea daddy to the plebes.

Edward was lost when USS Lexington (CV 2) was attacked by Japanese aircraft on May 8, 1942 in the Battle of the Coral Sea.

Edward was born in Richmond, Virginia, to John and Elizabeth (Sutphin) Price. They had married in 1911.

In the 1929 Hargrave Military Academy yearbook, Edward was in his freshman year. "Another mountaineer is 'Shorty' Price. He is our star student and we feel confident that he will get the scholarship medal this year." In 1931-32, he was editor of the Musketeer, a weekly publication of the academy.

In 1930, his widowed mother was a nurse for the Pendleton family in Princeton. His mother became Mrs. Ray P. Reynolds of Princeton. He was an attorney. They later divorced, and he died in 1948.

Among graduates of the Hargrave Military School, Chatham, Va., this year, was one Edward Price, now looking forward to a sixteenth birthday that will occur toward the end of this June. In the final exercises the school authorities pinned all the medals on his uniformed chest that they could find room for and then in some despair placed the remainder in a plush-lined box for him to carry home to his mother, Mrs. Elizabeth Reynolds. …

Hearken to a recital of the honors that went to Second Lieutenant Edward Price:

As we said, Col. Aubrey Hayden Camden, president of this institution, placed as many medals as he could on the Price chest and handed him the others in a box. Then in cleaning up miscellaneous odds and ends it was found that Edward had won a scholarship to the University of Richmond, which entitles him to free tuition there the first year, with the stipulation that if he maintains his high record the scholarship will be extended to the second, then to the third and fourth years through the same procedure.

He was nominated to the Naval Academy by Representative Joe L. Smith.

Lieutenant Edward Max Price, of Princeton and Charleston, was killed on the U.S.S. Lexington in the Battle of the Coral Sea on May 8, 1942. Lieutenant Price was officer in charge of weapons in the after control station of the Lexington. He was responsible for the training and action of the automatic gun crews, and when in battle he directed the aim for his gunners.

On the second day of the Coral Sea Battle, the Japanese were coming at the Lexington from all directions. The dive bombers zoomed close. Their deadly missiles fell all about the marked ship. The men were too busy to think of dodging them. Their minds were on their jobs. Their young officer’s attention was focused on the job he had to do- fight off the Japanese planes. A bomb whistled close- then exploded. A fragment struck Lieutenant Price. He died giving the command "Keep firing!" And the gun crew did.

Although the Lexington sank later that day, those surviving shipmates remembered the young lieutenant and his orders. William Harbour, a shipmate, who was directly under him in the ammunition handling room when the bomb exploded, told the most complete story of his gallant death. Mr. Harbour, later released from the Navy to become an aviation cadet in the Army Air Corps, said further: "My first three Japanese planes will be offered as a token to the memory of Lieutenant Edward Max Price."

He attended Lincoln Grade School in Charleston; Hargrave Military Academy (Class of 1932) in Chatham, Virginia; Concord State College, Athens, West Virginia; and the United States Naval Academy with the highest scholastic record in the class. He was valedictorian, and received medals for scholarship and marksmanship on the rifle team, and an award for being the most outstanding senior of the year. His high record was maintained at the Naval Academy where he ranked twenty-sixth in a class of 550. On graduation from the Academy he was assigned to the Lexington as an ensign. In the line of duty, his superiors rated him as a "splendid" officer.

Admiral Chester W. Nimitz, commander in chief of the Pacific Fleet, commended the young officer in a citation for bravery: "He contributed immeasurably to the destruction wrought on the attacking aircraft by skillfully directing the fire of his batteries. He perished at his battle station carrying out his duties in the best tradition of the Naval Service." Tim Rizzuto

Edward is one of 78 members of the Class of 1939 on Virtual Memorial Hall.

Retrieved from "http://usnamemorialhall.org/index.php?title=EDWARD_M._PRICE,_LTJG,_USN&oldid=159205"
Categories:
This page was last modified at 13:15 on 13 October 2022.
About USNA Virtual Memorial Hall