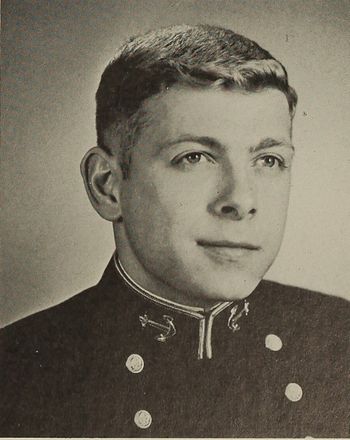 As a "Navy junior" Rick made his family proud when he was accepted to the Academy after graduating from the Navy's enlisted prep school at Bainbridge, Maryland. He will be remembered by his soccer teammates for his hustling style of ball playing and his affable nature and manner. Lightweight crew during his plebe year also won "Gino" many friends. On his summer leave he could be as easily found in some Paris Caveaux as in a quiet home town hideaway. An avid interest in things nautical, and a professional pride in a job well done, will prove valuable assets in Rick's Naval career.

As a "Navy junior" Rick made his family proud when he was accepted to the Academy after graduating from the Navy's enlisted prep school at Bainbridge, Maryland. He will be remembered by his soccer teammates for his hustling style of ball playing and his affable nature and manner. Lightweight crew during his plebe year also won "Gino" many friends. On his summer leave he could be as easily found in some Paris Caveaux as in a quiet home town hideaway. An avid interest in things nautical, and a professional pride in a job well done, will prove valuable assets in Rick's Naval career.

From the December 1968 issue of Shipmate:

Lt. Frederick E. Trani, Jr., USN, died 26 Sept. at the 24th Evacuation Hospital, Long Binh, South Vietnam, as the result of wounds sustained while on combat patrol. He was a member of the Seals assigned to Commander Naval Support Activity Saigon.

Lt. Trani was born in Lowville, N.Y. He enlisted in the Navy and was an honor man at Great Lakes Naval Training Station, Ill., prior to his appointment to the Naval Academy; he was graduated in 1963. His first assignment was in USS Fechteler, which received a citation for its role in the Tonkin Gulf incident that brought about the U.S. military buildup in Vietnam. Following training in the Seal program, he was assigned to Vietname and received the Silver Star and Bronze Star Medals last year for outstanding services. He had been in Vietnam for this second tour of duty since late May.

The following was received in January 2009 from Tom Murphy USNA 1962 and provides valuable information concerning our classmate Rick: From May '68 to May '69 I was assigned to the Naval Advisory Group and stationed at My Tho with VNN River Assault Group 33 (RAG 33). I was on the operation in which Rick Trani was killed and in fact called in the medevac helo which got him to Dong Tam where he subsequently died of his wounds. For many years I have felt a need to share my knowledge of this event and the details surrounding it and the memorial which RAG 33 and 21 maintained at their base which also eventually included Rick's name.

I first met Rick in September 1968 when he showed up at the VNN RAG base with a half dozen enlisted VNN sailors. While they were being processed by base personnel Rick told me these were the first graduates of the new VNN SEALS (LDNN) and he had been assigned as their Advisor and instructed to take them into combat. He further stated that he had been told that RAG 21/33 was the best fighting force in VNN (it was!) and he thought he would start here. As we planned an operation Rick stated several times that he didn't know these guys very well and he didn't want to get them in over their heads--not ending up confronting a VC battalion somewhere as he put it! We finally worked up a small operation on an island off My Tho (I think the name was Toi San but my memory fails me here although I could find it on a map). VC "tax collectors" were known to use it as staging area and we planned to ambush one of their parties. When we took the plan to the VNN RAG CO he was unenthusiastic which surprised me because I had found him to be an aggout,andressive and most competent leader on all of the previous operations we had shared . I guess he finally got directions through his chain of command to cooperate but he only assigned one of his JO's and a FOM (one of our small escort boats) to support it. Since Vietnamese JO's were usually not very fluent in English and not routinely used to independent responsibilities I decided to go along. It was the first and only time I went on an operation without my counterpart and the first time I had ever ridden in a FOM. Rick was able to recruit a US SEAL petty officer from the unit assigned to the PBR base next door to serve as his radio operator.

We inserted Rick and his team just after dark and then made a great show of moving off in the FOM before returning to await the morning extraction. We maintained radio silence until Rick's radio operator contacted us that they were on the way out. Just as the first of his men was coming out of the tree line there was a loud explosion and a call from his radio operator that "Mr. Trani is hurt, hurt real bad!" I shifted my radio frequency to the big US Mobile Riverine Force base at Dong Tam about 7 km away to get a dust off helo en route. When I got back to Rick's radio frequency I couldn't get any information except that Rick was hurt bad, couldn't make it out, and needed help from me "right now!" The helo was there in minutes, I shifted frequencies again to talk to him and popped a smoke grenade for identification. The helo was reluctant to go in but since I could hear no small arms fire I assured him it would be a cold pick-up and he finally went in and took Rick out. We finally extracted the rest of Rick's guys and his radio operator and learned that there was a trip wire booby trap that each of his men passed safely by until Rick detonated it. I got to the hospital in Dong Tam the next day and talked to Rick. He was in good spirits and coherent although still listed as critical because of the possibility of a blood clot reaching his heart.

He told me they had ambushed and killed a VC "tax collector" party and retrieved several weapons and a fair amount of money (all of which later disappeared and to this day I'm sure his men stole). A day or two later I learned that Rick had died of his wounds.

If you've read this far I'm grateful for your patience but I'm now at the point where I now want to pass along something else about Rick previously known only by me. Shortly after the events described above, my Vietnamese counterpart, who was very proud of our base appearance (it was actually quite elegant having been a former French yacht club) decided to erect a monument to our fallen VNN sailors from the two RAG's stationed there. It was to be a larger than life statue of Tran Hung Dao, said to be the father of the Vietnamese Navy, with the names of our KIA listed on the pedestal. As I watched the work progress I decided that Rick's name should also be included. I met instant opposition from my counterpart who insisted that only Vietnamese sailors should be listed. After weeks of fruitless discussion I stated that, should I end up a KIA I would expect to be included. My counterpart finally conceded the point that, since I was in fact an official member of the RAG, he would see that I was included. Given this opening I pushed that Rick was also assigned to the RAG on the day he was mortally wounded but again I got opposition. I even tried the "you owe me ploy" since the bags of cement used for the monument were stolen from the USAID warehouse by my enlisted advisor with my approval (I assume the statute of limitations has expired prompting this confession). Anyway, we shortly left for an unprecedented two week operation on the rivers and, on our return, my counterpart took me to the completed monument to show me Rick's name now listed! I guess there is something in the Vietnamese psyche that they won't do something unless it's their idea. Anyway, in doing it themselves they misspelled Rick's name!

Pictures of the monument that Tom Murphy '62 took when he left Vietnam in May 1969: 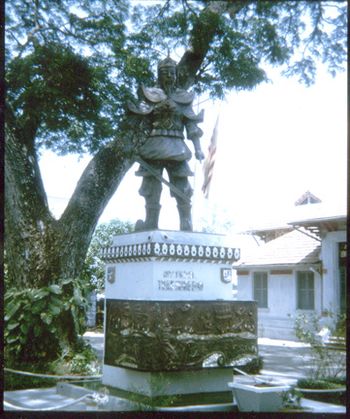 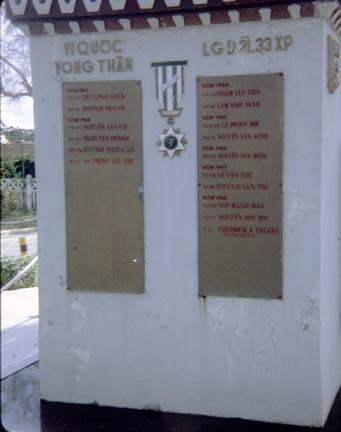 The President of the United States of America takes pleasure in presenting the Silver Star to Lieutenant Frederick Eugene Trani, Jr. (NSN: 0-669618), United States Navy, for conspicuous gallantry and intrepidity in action as a member of Sea Air Land Team TWO (SEAL-2), Task Force 116, while serving with friendly foreign forces engaged in armed conflict against Communist insurgent forces on the hostile island of Cu Lao Dung, Ba Xuyen Province, Republic of Vietnam, on 26 July 1967. While leading a small combat patrol, Lieutenant Trani, serving with SEAL Team Detachment Alpha, encountered and subsequently was surrounded by a numerically superior enemy force. Unable to maneuver out of the enemy encirclement, Lieutenant Trani attempted to contact supporting helicopters by radio, but before he could effectively communicate his unit's position, he experienced radio failure. Undaunted by the lack of communications with supporting arms, he maneuvered his small unit into a tight defensive position. Though pinned down by constant enemy automatic weapons and rifle fire in a position that afforded only minimal protection for himself and his squad, and despite growing uncertainty of the arrival of assistance, Lieutenant Trani courageously moved among his men and succeeded in keeping morale high. Faced with a limited supply of ammunition and the imminent threat of a coordinated enemy attack that might easily overrun his small unit, he methodically employed every conceivable means to attract the attention of armed helicopters which he could hear operating in the distance. Four unnerving hours passed before the armed helicopters arrived to assist his beleaguered unit. Able to employ only primitive methods, he succeeded in marking his position for the helicopters and directed their fire onto part of the Viet Cong forces surrounding him. He directed another helicopter to a safe location to land for extraction of his unit. He then organized his men and maneuvered them under continuing enemy fire to the extraction craft without casualties or loss of a prisoner who later yielded valuable intelligence information. Through his exemplary and professional leadership, unwavering courage under fire and inspiring conduct throughout a desperate situation, Lieutenant Trani upheld the highest traditions of the United States Naval Service.

The President of the United States of America takes pride in presenting the Legion of Merit with Combat "V" (Posthumously) to Lieutenant Frederick Eugene Trani, Jr. (NSN: 0-669618), United States Navy, for exceptionally meritorious conduct in the performance of outstanding services to the Government of the United States while serving in the Republic of Vietnam from 15 May to 26 September 1968. As the Senior Advisor to the Vietnamese Navy SEALS, Lieutenant Trani provided advice and assistance to the SEALS in all matters pertaining to their training, utilization and administration. He participated in numerous combat operations and was often subjected to direct enemy fire. Through Lieutenant Trani's keen insight and outstanding professionalism, the Vietnamese Navy SEALS were reorganized, equipped and trained to conduct unconventional warfare type missions throughout the Republic of Vietnam. Their motivation and performance during many difficult and dangerous assignments is directly attributable to Lieutenant Trani's efforts. His devotion to duty, courage under fire and sense of responsibility were in keeping with the highest traditions of the United States Naval Service. (Lieutenant Trani is authorized the Combat "V".)

Frederick is one of 29 members of the Class of 1963 on Virtual Memorial Hall.