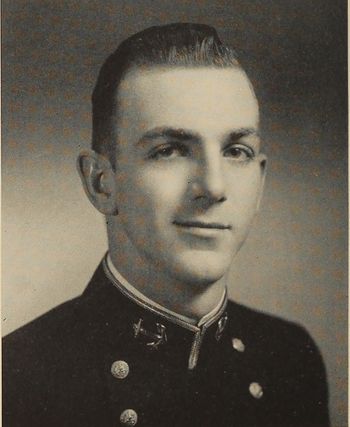 After graduating in '46 from Pitman High School, Mort decided to set out to see the world. However, he somehow missed the Navy Recruiting Officer and wound up in the Marine Corps. After two years in the Marines, he entered USNA via Fleet Appointment. Even though he had to spend a little extra time now and then studying after his two year absence from textbooks, Mort still found time to be one of the more consistent draggers of beautiful women — as his locker door disclosed upon inspection. Upon graduation, Mort hopes to catch a quick hop to Quantico and re-don the Marine Green.

He was also a member of the 2nd Battalion staff (2nd set) and the 5th Company staff (1st set).

After graduating in '46 from Pitman High School, Mort decided to set out to see the world. However, he somehow missed the Navy Recruiting Officer and wound up in the Marine Corps. After two years in the Marines, he entered USNA via Fleet Appointment. Even though he had to spend a little extra time now and then studying after his two year absence from textbooks, Mort still found time to be one of the more consistent draggers of beautiful women — as his locker door disclosed upon inspection. Upon graduation, Mort hopes to catch a quick hop to Quantico and re-don the Marine Green.

He was also a member of the 2nd Battalion staff (2nd set) and the 5th Company staff (1st set).

From As We Recall: Reminiscences of the Naval Academy Class of 1952:

After graduation and Basic School at Quantico, Virginia, we Class of 1952 Marines mostly proceeded to the 1st Marine Division in Korea of the expanding 3rd Marine Division at Camp Pendelton in California. Mort Cox and I had been in the 5th Company at the Naval Academy. Mort went straight to Korea. I arrived in Korea in May 1953, two months before the shooting stopped. Mort and I were both platoon commanders in the 1st Marines, he in the 2nd Battalion and I in the 1st Battalion.

On Sunday 12, July, the 1st Marines were in reserve. When Mort came over to our battalion for lunch, we talked over old times and he told me a story. When the 1st Marines had been "on the line," his company was on the regiment's left flank, a few hundred meters from the Panmunjom-Freedom Gate Bridge "Peace Road," which was considered demilitarized. One night, the Chinese occupied a small hill, which the Marines had named the Molar, between the Marines and the road. From the Molar, they could fire at the Marines, but the Marines could not fire back without shooting into the road. Naturally, that wouldn't do, so the Marines built a position right against the road, which they had named the Toothache. For the troops on the Toothache, it was great duty. They could fire at the Molar, but the Chinese on the Molar couldn't return fire. The mess sergeant could drive up the road with hot chow, and the troops could eat out in the open.

One day the Marines heard music and saw a small Chinese band come down the road with a dancing girl. The band stopped at the Toothache, proceeded to give a show, and handed out candy. Cameras were broken out on both sides. As soon as the affair began, the company commander called up the chain of command for instructions. Meanwhile, everyone was having a blast. Two hours later, the word came down: "Ignore them." End of story.

The Korean War cease-fire started on Monday, 27 July 1953. The next day, the twenty-eighth, our battalion exec told me, "Your friend who came for lunch two weeks ago was killed Saturday." I drove a jeep over to Mort's company position and asked a Basic School classmate, Bobby Haydock, what had happened.

On Friday night, 24 July, the Chinese had hit the 2nd Battalion position in a mass attack. Mort's and Bobby's platoons were out front. The Marines had two bulldozer tanks that had dug in, so they were in hull defilade, with only their turrets above ground. All through the night, the Chinese would attack along the front, firing, shelling, and running up to the tanks to blow them up with satchel charges. Mort and Bobby called in illumination and had positioned machine guns to protect the tanks, firing at the attacking Chinese and shooting right at the tanks as the Chinese tried to climb the turrets. The Marines won; the Chinese withdrew. The next day, Mort, Bobby, and their platoon sergeants met on the reverse slope of their position to decide where to tie in for the night.

From time to time, both we and the Chinese would fire blindly where the enemy might be. It was called harassment and interdiction fire. That day, the Chinese got lucky, and an 81-mm mortar shell landed right among the four Marines. Bobby's platoon sergeant and Mort were both hit. Bobby told me that a shard of the mortar shell went right up under Mort's flak jacket. Mort said, "Get me out of here, Bobby!" and died moments later.

In 1940 his family was his father, an attorney, mother Marion, sister Elizabeth, and brother Alfred. They were all born in Pennsylvania. In 1930 the family was counted twice – at their townhome in Philadelphia, Pennsylvania, and their home on acreage in Mantua/Sewell, New Jersey. Mortimer played football as a junior at Pitman High School in Sewell. He is buried in Barnsboro just a mile or so from his high school and their home.

The President of the United States of America takes pride in presenting the Silver Star (Posthumously) to Second Lieutenant Mortimer West Cox, Jr. (MCSN: 0-36480), United States Marine Corps, for conspicuous gallantry and intrepidity as Acting Executive Officer of Company I, Third Battalion, First Marines, FIRST Marine Division (Reinforced), in action against enemy aggressor forces in Korea, on the night of 24 - 25 July 1953. With his company split in two and sustaining numerous casualties while proceeding through the darkness well forward of the main line of resistance to reinforce another company which was under heavy enemy attack, Second Lieutenant Cox exercised unusual leadership and exceptional initiative in regaining control, restoring cohesion and renewing the company's forward movement. Upon arriving at the forward position, he immediately took charge of resupply for both companies. Undaunted by the unceasing hostile artillery and mortar fire concentrated in the supply area, he exposed himself repeatedly to the withering barrage throughout the night to direct the salvage and distribution of ammunition, weapons and medical items, thereby insuring a constant flow of supplies to the defenders. In addition, he was instrumental in saving numerous lives by leading parties forward into the trenches to carry the wounded to the rear. Struck by enemy fire and instantly killed while reconnoitering the forward positions during the morning mopping-up operations, Second Lieutenant Cox, by his great personal valor in the face of heavy odds, served to inspire all who observed him. His actions throughout were in keeping with the highest traditions of the United States Naval Service. He gallantly gave his life for his country.

Mortimer is one of 50 members of the Class of 1952 on Virtual Memorial Hall.