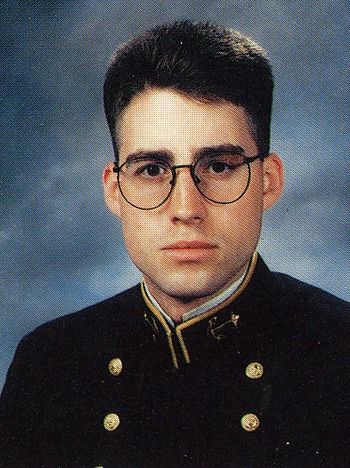 “He was such a quiet guy...”
Kylan came from some little tiny hole in the wall in California (Where is Aptos, anyway?). Kylan is an unusual sort — between visits to the Master Chief and the Moon Cafe he really made Chris sweat (I’m glad Chris didn’t read your Winkler paper.) Stop the music is no longer a trivial pursuit, YOU try to stop Beethoven's 9th while braced up against the wall. VGEP was good to Kylan, it was kind of like school, with a Naval Academy option. Ol’ One-Way really made my time here worth-while with trips to Hard Times and the Sign o’ the Ram. Besides sending my shoes to exotic places, it’s been great. I figure we're about even money-wise, Kylan... oh yeah... do you remember the night you spent with JLV???? *chuckle* (Lowell, Indiana??) (Captain Peet didn’t like Winkler??) (Homo-what??) (Ramsheadhaspretty goodrustynailseh?)
TGB JWS

“He was such a quiet guy...”
Kylan came from some little tiny hole in the wall in California (Where is Aptos, anyway?). Kylan is an unusual sort — between visits to the Master Chief and the Moon Cafe he really made Chris sweat (I’m glad Chris didn’t read your Winkler paper.) Stop the music is no longer a trivial pursuit, YOU try to stop Beethoven's 9th while braced up against the wall. VGEP was good to Kylan, it was kind of like school, with a Naval Academy option. Ol’ One-Way really made my time here worth-while with trips to Hard Times and the Sign o’ the Ram. Besides sending my shoes to exotic places, it’s been great. I figure we're about even money-wise, Kylan... oh yeah... do you remember the night you spent with JLV???? *chuckle* (Lowell, Indiana??) (Captain Peet didn’t like Winkler??) (Homo-what??) (Ramsheadhaspretty goodrustynailseh?)
TGB JWS

From the Military Times:

People who knew Lt. Kylan A. Jones-Huffman from his years as a gifted high school student to his time as a naval officer described him as a “go-to guy” — a person who gladly accepted any difficult challenge and tackled it.

But what everyone saw as a young life already marked by achievement, and a future full of promise, ended Aug. 21, when Jones-Huffman was shot by an unidentified gunman while riding in an SUV near the town of Hillah, Iraq. He died soon after at Camp Babylon Medical Facility.

Jones-Huffman, 31, was an intelligence officer temporarily assigned to I Marine Expeditionary Force. A fellow officer said he was 10 days away from going home. He was the first mobilized drilling naval reservist killed in action in either operations Enduring Freedom or Iraqi Freedom, Naval Reserve officials said.

He leaves behind a wife, Heidi Jones-Huffman, his high school sweetheart. They lived in College Park, Md.

Jones-Huffman arrived in Bahrain in late January, after being mobilized from a Baltimore-based Reserve unit. As an Arabic speaker and terrorism expert, he was a valuable addition to the intelligence department, said his commanding officer, Capt. Tom Meek, assistant chief of staff for intelligence at Naval Forces Central Command in Bahrain.

Jones-Huffman was in southern Iraq shortly after the fall of Baghdad, meeting with local ethnic factions and helping local coalition forces gain an understanding of the situation, Meek said.

“He could go up there, talk to the locals He really impressed a lot of people up there,” Meek said.

In the department, Jones-Huffman earned the nickname “The Machine” for his ability to analyze large amounts of information.

He was fluent in Arabic, Farsi, French and German. A fellow officer said Jones-Huffman taught himself Farsi while stationed in the Persian Gulf to better communicate with the Iranian navy units his ship would encounter.

He graduated in 1994 from the Naval Academy, then earned a master’s degree in history from the University of Maryland.

As a surface warfare officer, Jones-Huffman served two deployments aboard the frigate Ingraham in the Persian Gulf.

From there, he joined the precommissioning unit for the coastal minehunter Raven, then accompanied it for another Persian Gulf deployment. Jones-Huffman came back to the academy in 1999, teaching the history of ancient Greece and Nazi Germany.

Jones-Huffman later worked for a year at the Naval Criminal Investigative Service. He began work on Sept. 11, 2001.

“In that one year we had him, he was just an absolutely remarkable analyst He had a brilliant, incisive mind,” McGlothlin said.

Jones-Huffman affiliated with the Reserve in late 2001, assigned to Naval Coordination and Protection of Shipping, Detachment A at Naval Reserve Center Baltimore.

He left NCIS in late 2002, and worked for a private company. Early this year, he was accepted into the doctorate program in history at The George Washington University in Washington, D.C., but had not started.

Fellow officers said he wanted to earn a doctorate in history and teach, preferably as a university professor — and all commented he’d excel at that, too.

“He’d really engage those he was teaching, and he had a way of captivating his audience,” said Capt. Michael McDaniel, commanding officer of his Reserve unit.

Jones-Huffman grew up in Aptos, Calif. the oldest of three children. His father was a career Army officer. As a teenager, he attended York School, an independent school in Monterey.

Brenda Aronowitz, assistant head of the school, described Jones-Huffman as a voracious reader, walking from class to class with a book in his hand.

She said despite his intellect, Jones-Huffman always was willing to help out a fellow student, even before he was asked. “People liked him; he was a very popular boy.”

While at York High School in Monterrey, Kylan applied for the Naval Academy. A fellow classmate Jesus Torres got interested and applied, too. As a baby, Jesus was tucked into a lettuce box near where his immigrant parents picked crops. After Kylan died, Jesus wrote to the Santa Cruz Sentinel: “I can still vividly remember the day in the boys locker room when Kylan and I had a conversation regarding the academy. Kylan had just recently found out he had been accepted into the Naval Academy, and I had told him I was considering doing the same thing. I explained that I was a little concerned with the commitment and military life. Kylan’s cool and collectiveness put me at ease, and at the end of our conversation – more than anyone else – he had convinced me to apply. At such a young age he was already showing the traits of a leader.” Jesus graduated from the Naval Academy in 1996, became a Captain with the U.S. Marines and served in Iraq.

Another friend of Kylan’s from York High School, Woo Woo attended his memorial service at the U.S. Naval Academy. He described Kylan as having a “kind and gentle nature, a wry sense of humor, and an endless capacity for knowledge.” Kylan expressed his “cool and confident” fashion sense with big aviator glasses and a dark jacket. He was a military buff who like to stir up discussion by playing the devil’s advocate, and he knew how to lighten a friend’s spirit on a difficult day or during a tough task. He enjoyed leading his fellow cross-country team members on illicit runs across the former Fort Ord, for example. He knew many military cadences – “some more colorful than others” – and he would belt them out as they ran. His enthusiasm was contagious. Woo said, “Even after I had started cramping up from the running, the funny cadences would pull me through.”

At York School, Kylan ran track, played soccer, served on the student council and was a delegate to the Junior States of America. Kylan graduated in 1994 with a master’s degree from the University of Maryland.

He married Heidi Lynn Jones on January 14, 1995 at the York Chapel. They both took the hyphenated name Jones-Huffman.

From the Santa Cruz Sentinel, November 11, 2003: Kylan spoke German and English as a child, learned French while studying for his master’s degree, and taught himself Arabic and Farsi. He wrote haiku to document his term at sea; some of it was published. He worked for naval criminal investigations in Washington, D.C., and also taught the history of ancient Greece and Nazi Germany at the Naval Academy. His goal was to earn a doctorate and become a teacher.

When his parents sold their home to Dr. Larry deGhetaldi, they moved nearby. DeGhetaldi watched Kylan grow up and was so impressed, he named his first son after him. “We found in him a model for what we wanted our own children to be: poise, kindness, honor, an unquenchable thirst for learning, respect and that immediately recognizable spark that really bright young people have.” DeGhetaldi kept finding abandoned toys buried in the front lawn which he called “little time capsules.” “All of him, from the lost plastic toy soldiers in my front lawn, to the haiku focused on Iraqi children selling bayonets for food, (teach) me, (teach) us all to remember the core and the vital humanity in our soldiers.”

Some of his haiku is printed in this article.

Via the Baltimore Sun on September 2, 2003: Karl Funderberg, a Navy reservist served with Kylan and said that he possessed an “uncanny ability to read and digest lots of information in a short amount of time. Then he would turn around and teach the rest of us what he learned in terms that we could all understand.” He had a lighter side, too. He would play the Swedish pop band ABBA every morning at 5. When his co-workers begged for something different, he switched to an Arabic CD and another of techno rap until they pleaded to have ABBA reinstated.

Kylan is buried in the Naval Academy Cemetery. (There is a second Find A Grave entry.)

Multiple sites refer to Kylan as a reservist, including article above and http://www.baltimoresun.com/news/bal-huffman090203-story.html

On the killed in action panel, there is an extra "-" between his middle and last names. ("KYLAN ALEXANDER-JONES-HUFFMAN")

Kylan is one of 7 members of the Class of 1994 on Virtual Memorial Hall.

Retrieved from "http://usnamemorialhall.org/index.php?title=KYLAN_A._JONES-HUFFMAN,_LT,_USNR&oldid=136394"
Categories:
Hidden categories:
This page was last modified at 14:53 on 8 January 2021.
About USNA Virtual Memorial Hall