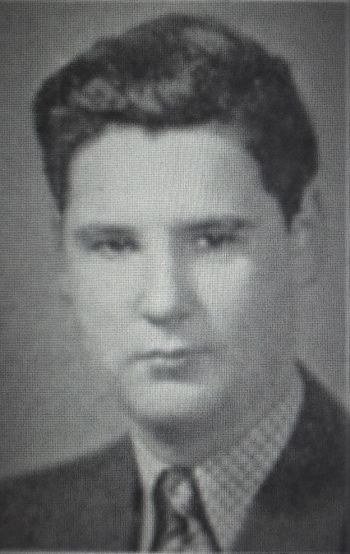 From his high school yearbook

Norman was born in Los Angeles, California, but by 1927, his parents (Sam and Freda) moved to Chicago, Illinois. He and his mother were on a trip that year to Europe and returned from Southampton, England. In 1930, Norman’s father Samuel was a printer. He was born in Poland and immigrated to this country in 1912. In 1940, the family now included daughter Marlene, born in 1931.

Norman attended the Naval Academy for a short time between June 29, 1939, and February 10, 1940. He then attended Northwestern University for a year and studied acting. On November 3, 1941, he joined the Army as an aviation cadet in Chicago.

Norman was lost on August 25, 1942 aboard a B-25C named Boomerang flying from Seven Mile Drome (Port Moresby) to Milne Bay, New Guinea. The plane (Bureau No. 41-12499) was part of a bombing formation against Japanese shipping. A large flash was seen, and it was presumed that she either dropped her bombs too low or she was hit by anti-aircraft fire.

General MacArthur’s Headquarters in Australia officially announced the fighting on August 27: “Japanese shock troops have landed on the southeastern tip of New Guinea less than 500 miles from the Australian mainland despite heavy Allied air action which destroyed one enemy transport, six landing barges, and probably a cruiser … Milne Bay: In the face of strong air opposition the enemy landed ground forces from a small convoy during the night. Allied heavy bombers, under the most adverse flying conditions, attacked from a low altitude and sank a transport, heavily damaged and probably sank a cruiser, and damaged a destroyer. One of our bombers was shot down.”

The crew of six was declared dead on December 12, 1945. No trace was ever found of them or the plane.

He has a memorial marker in Manila.

Norman is not listed with his classmates or on the killed in action panel in Memorial Hall. This omission was discovered by researcher Kathy Franz.

Norman is one of 84 members of the Class of 1943 on Virtual Memorial Hall.

The "category" links below lead to lists of related Honorees; use them to explore further the service and sacrifice of the alumni in Memorial Hall.
Retrieved from "http://usnamemorialhall.org/index.php?title=NORMAN_K._MILLER,_1LT,_USA&oldid=128607"
Categories:
Hidden categories: