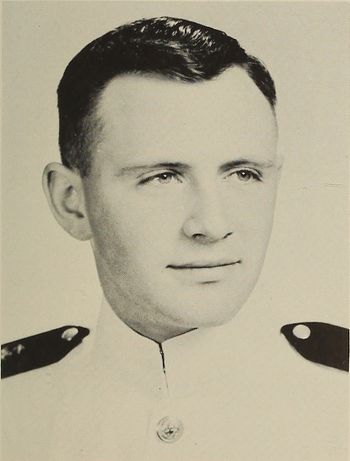 Lamar came to the Academy directly from East High in Memphis, Tennessee, and is a very dedicated Southerner. His one ambition is to be a Naval Aviator. While at the Academy, Lamar participated in brigade boxing and was a member of the football squad. His diversified interests also included the Model and German clubs and WRNV. When not engaged in these activities, Lamar could be found reading or even occasionally studying. Not one to ignore the members of the opposite sex, Lamar has, since arriving at the Academy, shown more than a passing interest in the ladies. Always ready with a quick answer and an easy laugh, Lamar added his charm to many of the activities at the Academy. With all of these attributes, Lamar will certainly be considered an asset to the "eyes of the Fleet".

Lamar came to the Academy directly from East High in Memphis, Tennessee, and is a very dedicated Southerner. His one ambition is to be a Naval Aviator. While at the Academy, Lamar participated in brigade boxing and was a member of the football squad. His diversified interests also included the Model and German clubs and WRNV. When not engaged in these activities, Lamar could be found reading or even occasionally studying. Not one to ignore the members of the opposite sex, Lamar has, since arriving at the Academy, shown more than a passing interest in the ladies. Always ready with a quick answer and an easy laugh, Lamar added his charm to many of the activities at the Academy. With all of these attributes, Lamar will certainly be considered an asset to the "eyes of the Fleet".

On 6 February 1967, then Capt. Lucius L. Heiskell was the pilot of an O-1F aircraft, call sign "Nail 65," that was the lead aircraft in a flight of two conducting a FAC mission for strike aircraft operating in extreme western North Vietnam. His wingman was Capt. Gerald Dickey. The mission identifier was Steel Tiger, Cricket Area 4," a region that included the portion of North Vietnam bordering Laos that included the Mu Gia Pass, one of the two primary gateways into the infamous Ho Chi Minh Trail via Route 15. Between 17 April 1965 and 31 December 1971, 43 American airmen were lost and listed as POW/MIAs in a 33.3-mile square window of the world known as the Mu Gia Pass.

When North Vietnam began to increase its military strength in South Vietnam, NVA and Viet Cong troops again intruded on neutral Laos for sanctuary, as the Viet Minh had done during the war with the French some years before. This border road was used by the Communists to transport weapons, supplies and troops from North Vietnam into South Vietnam, and was frequently no more than a path cut through the jungle covered mountains. US forces used all assets available to them to stop this flow of men and supplies from moving south into the war zone.

Weather conditions were extremely overcast with tops at 3,000 feet and low scattered clouds underneath. Visibility was 4 to 5 miles in haze. The terrain consisted of extremely rugged karsts covered in moderately heavy jungle growth.

Once in the area of operation, Capt. Heiskell identified an underwater bridge for attack. The target was located on Route 1501 that ran through a small valley approximately 1 mile east of Route 15 and 7 miles due north of the Mu Gia Pass. Capt. Dickey was directed to hold to the south while the strike was being conducted. Two US Navy A-4 Skyhawks were assigned to this mission. The lead pilot was directed to the chosen target, and he acknowledged that he had the underwater bridge in sight. Capt. Heiskell turned west to fly over the west edge of the valley in which the target was located. Capt. Dickey also turned his aircraft toward the west and momentarily lost sight of Lucius Heiskell.

As both Birddogs pressed through their turns, Capt. Heiskell reported receiving ground fire. Capt. Dickey also began taking ground fire and both pilots immediately took evasive action. Shortly thereafter, Lucius Heiskell reported, "I'm hit." Gerald Dickey turned his aircraft to the left and saw Lead's aircraft in a descending left turn. The Birddog's horizontal stabilizer had been badly damaged by flak from an enemy anti-aircraft artillery (AAA) battery hidden in the jungle below. Capt. Heiskell reported that he "could not control the aircraft and would have to bail out."

Capt. Dickey watched Lead's aircraft as it crossed over the center of the valley heading east. Lucius Heiskell was able to partially roll out of his turn. As he reached a point near the center of the valley, his aircraft started trailing a thin line of white smoke. Capt. Dickey continued to watch from a distance of roughly 1 mile as the Birddog reached an altitude of terrain plus 1,000 feet when he saw a parachute deploy and descend into a forested area 4 to 5 kilometers east of the valley. Gerald Dickey immediately contacted the airborne battlefield command and control center (ABCCC) with a situation report. In turn, the ABCCC initiated a search and rescue (SAR) operation for the downed pilot.

Firefly 13 and 14, a flight of F-4s, arrived on scene to assist in the SAR mission to rescue Lucius Heiskell. Capt. Dickey gave them the direction and the column of smoke believed to be from the crashed aircraft. After some minutes, Capt. Dickey saw a burst of AAA fire over Capt. Heiskell's location and turned to avoid the ground fire.

During and after this time Capt. Heiskell came up on his survival radio with beeper and several voice transmissions. He said, "the people on the ground were after him and he was hiding his parachute." Capt. Dickey continued to monitor his flight leader's transmissions for 4 to 5 minutes, after which time he could not be raised on the radio. Rescue helicopters arrived onsite, but were also unable to make radio contact with him or gain any signal from him.

When contact was finally reestablished with Lucius Heiskell, Jolly Green 05 descended through holes in the undercast of clouds, which were lying on top of some mountain peeks. Capt. Heiskell assisted Major Wood in locating his position with voice vectors. At 1634 hours, the SAR helicopter successfully recovered the downed Birddog pilot in the helicopter's minimum time. Major Wood notified Sandy Lead that he had the pilot onboard and was leaving the area to the south while looking for a hole in the clouds to ascend through.

At 1635 hours, JG 05 transmitted he had been hit and was on fire. The Sandy pilots immediately saw extremely heavy and accurate 37mm AAA fire directed toward Jolly Green 05 as they raced through the clouds. Fire was observed in the top part of the helicopter just below the rotor blades. Lead continued to the south with flames streaming behind, and continued forward for approximately 1 mile after being hit. Just before crashing into a karst peak, Major Wood transmitted that the whole aircraft was on fire. Other pilots and aircrews watched in horror as Jolly Green 05 flew directly and perpendicularly into the karst outcropping at a high rate of speed while on fire scattering flaming wreckage everywhere. The crash site was located less than ½ mile east of Route 15, 3 miles northeast of the North Vietnamese/Lao border, 6 miles due north of the Mu Gia Pass and 59 miles northwest of Dong Hoi, North Vietnam.

All during this time the weather conditions worsened, and due to the weather, the SAR operation for the down helicopter's crew and passenger was cancelled. Sandy Lead requested that Jolly Green 36 make a pass between the cloud layers to look for survivors in and around the new crash site before departing the area. After completing the first aerial inspection and seeing nothing, Sandy Lead requested that he satisfy himself that there were no survivors and made a second pass to do so. Jolly Green 36 conducted a 10-minute low-level search of the crash site and surrounding area. The SAR aircrew observed and identified two deployed parachutes on the ground, 1 was located 30 yards from the wreckage and the other 60 yards away from it.

As Jolly Green 36 was inspecting the debris field, Firefly flight heard an emergency beeper signal emanating from the area of loss. At 1640 hours, A2C Dwayne Hackney, the Lead helicopter's PJ, ignited a smoke flair to identify his position and was recovered by SAR personnel near the parachute farthest away from the crash site. No other survivors were seen near the other parachute or the wreckage. A2C Hackney reported that only he and Capt. Heiskell were wearing parachutes at the time his aircraft was struck by AAA fire and that he had been blown out of the helicopter by the force of the crash. At the time all formal SAR efforts were terminated Lucius Heiskell, Patrick Wood, Richard Kibbey and Donald Hall were listed Missing in Action. Further, due to the intense enemy activity in the area, no other SAR effort was conducted.

How could any of us who knew him, forget his wonderful smile, mischief and great personality. He was always nice to everyone. Sibyl Gray(Keirns), SIBYLK@AOL.COM, 6/7/07
Classmate 50-53 East Jr. High School- Memphis

Lamar and I shared similar experiences, having graduated from the Naval Academy with the class of 1962 together and selecting the USAF as our service. He visited with my wife and I for dinner at Tyndall AFB after graduation in 1963 during his fighter interceptor training. I remember Lamar for his fun loving easy going personality. He was gregarious in nature and fun to be around. His orchestrations of our June week parties were legendary. Our class lost a wonderful friend and great guy in Lamar. FRED CORBALIS, 5/25/01

Though most other sources reference him as a Captain, both Memorial Hall and his gravestone have Major. (Major also when mentioned in Class of 1962 column in the March 1975 issue of Shipmate.)

Lucius is one of 30 members of the Class of 1962 on Virtual Memorial Hall.

Retrieved from "http://usnamemorialhall.org/index.php?title=LUCIUS_L._HEISKELL,_MAJ,_USAF&oldid=119161"
Categories:
This page was last modified at 12:58 on 25 April 2020.
About USNA Virtual Memorial Hall