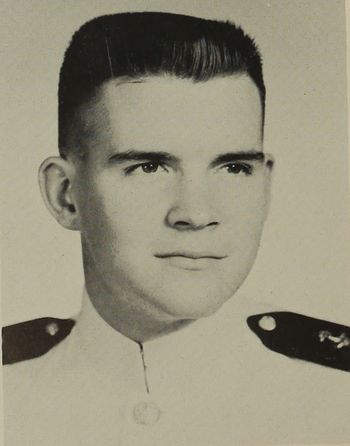 Mike hailed from a small town in the Catskill mountains of New York. He was valedictorian of his class and managed to letter 7 times before he left the hallowed halls of Ellenville Central. Mike could be found doing either of two things around the Academy; practicing soccer or hitting the books. He was on the Superintendent's List most of the time and also wore stars. He was an avid participant in soccer and was always playing or talking about the sport. Undecided on the type of naval occupation he will follow, he will be certain to do a good job at whatever he attempts.

He was also a member of the 10th Company staff (winter).

Mike hailed from a small town in the Catskill mountains of New York. He was valedictorian of his class and managed to letter 7 times before he left the hallowed halls of Ellenville Central. Mike could be found doing either of two things around the Academy; practicing soccer or hitting the books. He was on the Superintendent's List most of the time and also wore stars. He was an avid participant in soccer and was always playing or talking about the sport. Undecided on the type of naval occupation he will follow, he will be certain to do a good job at whatever he attempts.

He was also a member of the 10th Company staff (winter).

On 14 Dec 1966 a Navy ALPHA strike from the USS TICONDEROGA was targeted against a vehicle depot at Van Dien, about 5 miles west of Hanoi. As usual, fighters were tasked with providing combat air patrol over the target area while the bombers worked the target.

While over the target LT Michael Newell, flying F-8E BuNo 149148, was hit by fragments from an SA-2 surface to air missile. LT Newell advised his flight lead that his aircraft was handling well, turned south to egress the target area, and began a climb from the 6,000 foot CAP orbit to a higher altitude. A few minutes later he advised that he had lost hydraulic pressure, and comrades watched helplessly as his Crusader entered into uncontrolled flight and dove into the ground from an altitude of about 17,000 feet. Newell did not eject before ground impact; since he was not injured by the SA-2 impact it may be that G-forces due to uncontrolled flight prevented him from ejecting.

Mike was a member of Fighter Squadron (VF) 194, flying from USS Ticonderoga (CVA-14). 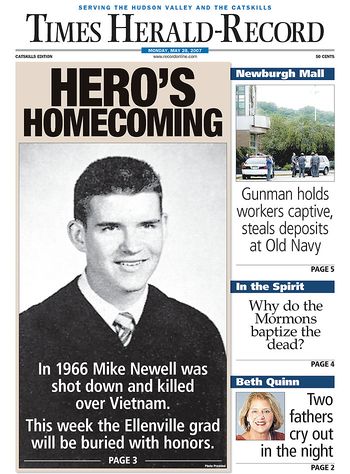 Ellenville, New York — Back when Cadillacs looked like grounded rocket ships and the Beav still ruled TV, it seemed like everyone in this once-bustling little blue-collar village stepped into their day with a cup of coffee and a hard roll at Bessie's Luncheonette on Canal Street.

This is a story about Bessie's and the village that gave it life. In particular, it's about a young man who hung out there after school back then, a young man who never got to be an old man and whose short life will be remembered and honored Wednesday at Arlington National Cemetery.

Lt. Mike Newell was a Navy pilot whose fighter jet crashed in the jungles of Vietnam on Dec. 14, 1966. For nearly 40 years, his family grieved without ever seeing his body or knowing all the circumstances of his death.

Earlier this year, government authorities notified his family that Newell's physical remains had been positively identified by dental records. The 26-year-old pilot's wristwatch and St. Michael's medal had been found near the overgrown crater where his plane had crashed, roughly 5 miles outside of Hanoi in what was then North Vietnam.

This is a story about honors earned with blood, about prices paid, burdens borne and memories gone unforgotten.

Bessie's was both hive and hideaway for high schoolers like Mike Newell and for the early morning lunch-bucket brigade on their way to the knife works and the antenna plant and the shops that surrounded Bessie's. Its sea-foam green walls were a bulwark against the cold realities of the great wide world outside Bessie's warm embrace.

All the kids at Ellenville High hung out at Bessie's back then, whether they sat at their favorite booths or spun themselves silly on the chrome-and-leatherette stools that faced the grill.

HELEN NEWELL WAS a popular figure there, as was her son Mike. He would have been a regular at Bessie's even if his mother hadn't been a waitress there.

But Mike Newell was something else again, someone special. He played varsity basketball, sang in the Glee Club and was salutatorian of the Class of '58. He was movie-star handsome and everybody at Bessie's knew he was going places. They knew he wanted to be a pilot. It was his passion and no one doubted he'd make his dream come true.

When he was appointed to the Naval Academy at Annapolis out of high school, the only surprise was that he hadn't applied to the Air Force Academy. But he could be a Navy pilot. When news of Annapolis reached them, folks nodded their heads knowingly, proudly. There he goes, they said to themselves. There goes Mike Newell, our Mike, on his way to bigger and better things.

During his four years at Annapolis, the news of the day washed like a tidal wave against the protective walls of Bessie's and every place like it. The seeming quietude of the Eisenhower era gave way to the fiery rhetoric of the New Frontier. America, the new decade's young president declared, would "pay any price, bear any burden" to assure the survival and success of liberty around the world. The burden the world offered was Vietnam. One of the prices paid was the life of U.S. Navy pilot Lt. Mike Newell.

IT'S BEEN MORE than 40 years since Mike Newell's Vought F8 Crusader was hit by fragments of a surface-to-air missile on a bombing run five miles west of Hanoi in North Vietnam. Newell took his aircraft to 17,000 feet where it lost hydraulic pressure. Initial reports said Newell was probably mortally wounded while in the air and was unconscious when his plane cratered into the jungle.

Local legend has a more dramatic ring: Newell refused to eject from his crippled fighter, preferring death to becoming a POW.

Newell was one of the first American casualties of Operation Rolling Thunder, which had been announced the day before his plane went down. Rolling Thunder was an attempt to destroy North Vietnam's economic infrastructure. It was scheduled to last eight weeks. It was operational for three years. A million tons of American bombs were dropped on North Vietnam during that time, to no discernible strategic effect.

THESE DAYS, Ellenville is a shell of its once-prosperous self. The knife factory, the antenna plant, the car dealership and the movie theaters are gone. But if prosperity has abandoned Ellenville, the people who grew up there hardly seem to have noticed. If anything, hard times have made the bonds between them tighter than what existed in happier bygone days. Nowhere is this more evident than in the smoky realm of Ed & Al's Barber Shop, next door to where Bessie's Luncheonette used to be.

There, four classic pump-action barber chairs stand like crouching, chrome-plated mechanical beasts in a room whose walls and shelves teem with Ellenville memorabilia.

John Unverzagt is Ed & Al's curator. He digs out Newell's high school yearbook and says he remembers him as a good kid, a polite kid, but hesitates to say more than that because he knows so many other people who knew the kid better than he did.

Newell's been dead for close to 40 years. He effectively left Ellenville in 1958. But Unverzagt has no trouble coming up with a list of contemporaries who remember him personally or younger people who revere his memory because of what they know about his sacrifice.

She voices a painful truth about what happened to her those 40 years ago.

"I'm not the only mother who lost a son. Especially in this Iraq War. There's so many dead and crippled soldiers.

Mike Newell will be laid to rest with full military honors at 11 a.m. Wednesday at Arlington National Cemetery, the traditional date of Memorial Day.

Mike and I became good friends in grade school.

We were both stubborn and had tempers. This would occasionally get the best of us, and we would have a fight. But I don't think we ever went more than a half hour before one or the other of us would call, apologize, and we would be back on the best of terms. Our friendship grew thru junior high, high school and in later years.

When Mike first started to think about entering a service academy, I wasn't sure how he would manage in that environment. I was concerned about his temper (I never told him this). He worked hard to get his appointment to Annapolis. As a midshipman, he thrived in that difficult environment.

Mrs. Newell's brother was an Air Force B-52 bomber pilot and Mike was always interested in planes and flying. When we were growing up, we went to as many air shows as we could at Stewart Field.

One of his summer midshipman cruises was to the Mediterranean, during a NATO exercise. On returning, he mentioned how many pilots were lost during this exercise. As he approached graduation, he was considering both submarines and flying. I remembered the statistics from his Med. cruise, and suggested subs would be a good choice.

But flying was Mike's dream, and he went on to become a carrier pilot. His dream became his passion. (I just recently had a tour of a nuclear attack sub, the USS Albany. I think he made the right choice.)

The only time I have been somewhat afraid in an airplane, Mike was at the controls. He had graduated from flight school and was flying an F8-U Crusader. Home on leave, he decided we should go to Wurtsboro Airport, rent a plane and fly over (aka buzz) his girl's (soon to be his wife Mimi's) house in Kerhonkson. Mr. Barone, the owner of the airport, went up with Mike to check him out in the Aeronca. On Mike's first pass at landing, he must have thought he was landing an F-8 on a carrier. He came in with power on. Mr. Barone did a lot of arm waving and Mike went around again and made a fine landing. Mr. Barone got out, Mike motioned to me to get in, and off we went. Well, the Aeronca looked much like a Piper Cub and was about as fast. It was much too slow for someone who had broken the sound barrier. He knew what the redline on the tachometer was for, but several times I had to remind him. I must say that his third landing in the Aeronca was at least as good as his second.

In the fall of 1964, I was in Army basic training at Fort Dix, N.J. I was summoned to report to the company commander in the orderly room. The CO told me that Lt. Michael Newell had called and requested that I be given a weekend pass so I could be an usher in his wedding. I had a good time at Mike and Mimi's wedding, dressed in my buck private's uniform, white gloves and shirt, and a black bow tie.

The last time I saw Mike, was at Mimi's parent's home in Kerhonkson. He was home on leave between tours in Viet Nam. He talked about some of his missions and how he wanted to get a MIG when he returned.

I was once again in uniform for the memorial service that was held for Mike at St. Mary's and St. Andrew's church in Ellenville. It seemed so necessary and so incomplete.

Mike, I still think of you and remember our good friendship. Welcome Home! Rest in Peace!

[Bob Kelb is a retired electrical engineer who lives in Chapel Hill N.C.]

Michael is one of 30 members of the Class of 1962 on Virtual Memorial Hall.